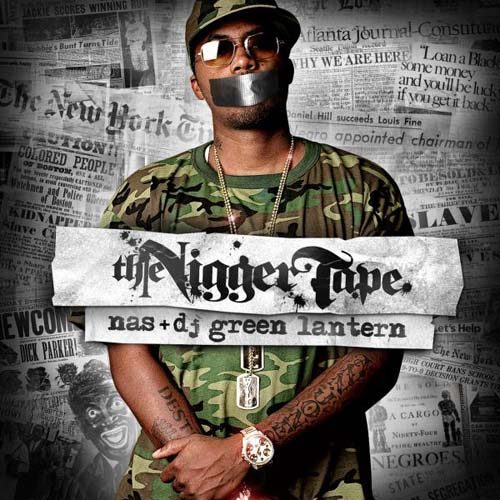 So “Nigger” switches to “Untitled” – and here is the mixtape primer to stir up anticipation for the album, something that Nas doesn’t really do. Put together BRILLIANTLY by DJ Green Lantern (and that means something coming from the extra-critical me), it features at least three songs that should definitely appear on the “Nigger” album – I mean, “Untitled” album. Plus awesome and thought-provoking skits, samples and generally wicked songs. All in all, this will probably get spun more on certain iPods more than “Tha Carter III” and “Seeing Sounds” over the next few weeks – well, until the “Nigger” album drops. Sorry, I meant “Untitled” album.

This won’t be an extensive review, since even though it may be dope as hell, it remains a specific mixtape promo for the true “Nigger” album (oops, I did it again). We will save the real meat and veg for the official album RapReview, but I strongly suggest that you get a hold of “The Nigger Tape” in advance. It features the solid “N.I.G.G.E.R. (Slave & Master),” the wicked “Be A Nigger Too (Remix)” (watch the original’s stunning epic eight minute video ASAP) and the first commercial single “Hero,” with guest Keri Hilson and a pounding Polow Da Don beat. “Hero” is pretty much a flawless first single for the “Nigger” LP, insofar as the instrumental is HARD but melodic, the chorus catchy but not cheesy, and the single commercial enough to get spins, but not so much that it would dilute the concept of the album.

You may well have heard “Black President,” the interesting Obama song – not a cow-towing ode, but an inspirational analysis. Perhaps the only perplexing song is “Legendary (Mike Tyson)” – an actual ode to Tyson, and it probably shouldn’t be on the real album. Standout tracks include the stic.man (of Dead Prez fame) collabo “Association” and the soulful “Ghetto (Remix)” with a brilliant Joell Ortiz guest verse. If these kinds of tracks aren’t making the cut for the “Nigger” LP, then it is time to get excited.

As if Nas fans need more geeing up, there is a lovely touch at the end – the eight minute “Timeline” finds snippets of classic Nas tracks chopped up and commentated on by a Nasir Jones so relaxed, he is practically Winehouse’d up in hospital (get well soon, darling). To other hip hop heads that aren’t massive Nas fans, it might make them realise just how important the Queensbridge MC is to hip hop – and if Jones can commit to the “Nigger” concept completely, and execute it to the best of his abilities (over dope beats, of course), then we could be in for something special here, people. Stay tuned for the full length “Nigger” album. Sorry, “Untitled” album (whatever).