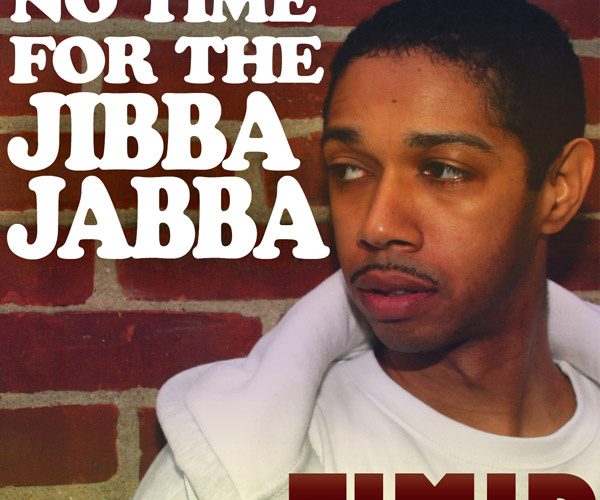 Timid :: No Time for the Jibba Jabba

Timid and Mr. T may have little in common in appearance, but when it comes to listening to fools, suckers, punks and the like, they both got no time for the jibba jabba. Not to suggest that this is where the comparison ends, but as a rapper Jaylon A. Carter can do well without angry looks, sheer force and gold chains. His ’02 debut may have been called “inTimidation,” but if any intimidation is to be expected from “No Time for the Jibba Jabba,” it is of the intellectual kind. Timid himself puts it this way:

“I know physically I’m not big enough for you to fear me
or handsome enough to force your girl to steer clear of me
or rich enough to worry if she wants to get near me
but beware of me, cause when I speak you will hear me”

The above hook, quoted from the album’s prophetically entitled second track “You Will Hear Me,” sums up the MC’s underdog approach that combines down-to-earth sincerity with lofty goals. As a lyricist, Timid (cl)aims to bring nothing less than “meaning-of-life-type stuff yet simplistic enough for a cypher of street heads to decipher and recognize I’m not the average writer.” He’s “a lone voice in the air cluttered with talk / with an audience of no one on a planet of billions that walk.”

Rappers regularly play the voice in the wilderness role. Nonetheless Timid manages to draw you in by being outspoken on not so much specific topics but life in general. The opening “Ready for It?” acts as a roll call for those who have not forgotten to “have a little fun with this hip-hop music.” The souful, thumping beat creates a festive atmosphere, but Timid doesn’t hesitate to dig a little deeper and address those caught “in that struggle between Kunta Kinte and Toby” with lyricism reminiscent of Talib Kweli:

“My aim is to gain, not just to maintain
cause lookin’ at the same thing will drive me insane
whether it’s a court yard or it’s a front yard
bein’ watched by a guard or havin’ to watch your guard
bein’ free to roam outside your cell or at home
Listen, with no direction it’s still a life in prison
I’m not tryin’ to be inmate number nothin’
followin’ the path of some cat on the mic frontin'”

Frontin’ is certainly not what Timid is about, not with his talent to convey intellectual substance in clever couplets. Whether it’s personal motivation (“I feel optimism, so I opt for wisdom”), wordplay (“It’s better to listen and not talk instead / cause you can’t tax the income of wisdom, message to the feds”), stereotypes (“They got you thinkin’ that the Sounds of Blackness / is the same as that of a round of a Gat click, like that’s it”), social observations (“Boys and girls who grow to be hopefully socially correct / but are shown to be emotionally hopelessly inept”), or philosophical musings (“Some of that good old grandfather wisdom / don’t pour it for my death, give me a cup while I’m livin'”), Timid has a way with words that reveals the experienced wordsmith. Best believe he ain’t talking about no TV show when he says he “held up the lease” when Run asked, “Whose house?”

Since recording his first demo in ’94, the Hawaiian-bred rapper has witnessed the worldwide expansion of hip-hop firsthand as an indie activist, reporting about hip-hop as well as living it as an artist. Currently operating out of NYC provided him with some serious industry connections, resulting in his involvement in upcoming releases distributed by Rawkus Records and an upcoming comeback album from Queens veteran Mikey D. Another benefit was being able to work with production legend Domingo, with whom Timid collaborates on one of the album’s strongest cuts, “Bringing the Awe.” Over a dramatically bubbling beat Timid makes it his mission to reinstall that feeling of awe spectacular hip-hop can inspire in us. “Too many think they can do it too,” he frowns, calling out competition: “I’m talkin’ to you slaves whose chains hang low,” “fools walkin’ around saggin’ like they diaper’s full,” “confusin’ amusement with love for them,” “yappin’ about makin’ some hits, how ’bout makin’ some sense?”

Here Timid brings a rare measure of maturity to the common hip-hop criticism, not just with intelligent lyrics but also with his authorative delivery. Not everyone who ever dug a rap tune might experience Timid’s “Bringing the Awe” as a jaw-dropping moment, but anybody who ever felt touched by a rapper’s reasoning will realize that Timid fights for hip-hop’s soul: “It seems we wanna be cursed but I Used to Love H.E.R. words / so much I’m determined I’m gonna be the one bringin’ the cure.”

Rappers rarely lack the conviction, but sometimes the means. It’s evident that budget-wise Timid plays in a league below the big boys. The self-produced tracks, which make up the bulk of the album, are of varying quality. In no era of hip-hop “Keep on Groovin” would have been acceptable musically. The clumsy instrumentation and cheesy singalong are akin to your high school staging its own hip-hop musical. “Ain’t That a Shame” starts out fairly funky but is rudely interrupted by clunky key stabs that sabotage the funkiness while the MC flows a little bit too fast for his occasionally unclear diction. “Better Days” is a simple slice of neo soul disturbed again by disposable keys. “Who Am I To…”‘s relaxed atmosphere is jeopardized by melodically crowded moments but Timid still makes a superb effort to calm things down with a musical deep-tissue massage and a raised but sympathetic voice while delivering his message of tolerance. In short, Domingo’s beat is of a different caliber than Timid’s own compositions. As is “Hard Lessons” with its acoustic guitar plucks provided by Grand Daddy I.U. But it’s Timid’s compassionate writing and serene performance that make the song another highlight.

The most generally accessible offering on “No Time for the Jibba Jabba” would be “View from Afar,” a Lotto-produced duet with singer Nyasha Foy exploring heartbreak. Conversely, the title track is decidedly underground, showing Timid in sarcastic mode, assuming the role of the inconvenient commentator who’s “out to rock boats the size of the Titanic”:

“Ignorance is no defense, it’s not open to debate
cause if I get shot you better snitch, I rest my case
(…)
And since you really only listen to the chorus of a song
pretend the next eight bars are a hook and sing along
Bamboozle me no more, a willing victim? Hardly
Little darling, I’m here to stir it up like Bob Marley
(…)
Thought I was timid, I don’t know what they told you
perhaps the FDA allowed steroids in my tofu
(…)
Check my Flavor clock and find out that it is
half past whatever these bastards are tellin’ the kids
And forget Amtrak, they’ve got another train to catch
because the Underground Railroad is back on the tracks
(…)
And in case you didn’t know that right there was the line
for New York DJ’s to overplay like 1000 times
Fast-food forgettable music and lifestyles
still tryin’ to be hood in a penthouse, stop it right now”

Knowing that he can get “a little too deep sometimes,” Timid makes a conscious effort to infuse his not always easily digestible views on society with simplicity, sincerity and a heavy dose of soul. The best example might be “Travelin’ Man,” a unassuming, sparingly instrumentated, flute-led ode to not staying confined in one place but to strive for personal growth by way of seeing the world. The global perspective is shared by the musically pensive yet potent “Let Freedom Ring,” a look at international politics from MLK’s universal standpoint.

With George W. Bush’s “four more years” coming to an end, Timid banks on the longevity of hip-hop as a vital counter-culture. The closing “30 More Years” possesses a nostalgic golden age slant but with the dedicated stance for hip-hop he takes throughout the album, Timid has every right to speak for us thirty-somethings who just can’t let go of this music. Penning one of the most impeccable hymns to hip-hop in recent memory, he certainly deserves to have the last word with it:

“More songs to Roxanne, more letters to Yvette
more Needin’ Love, showin’ love and more housin’ the set
more La-Di-Da-Di, cause we still likes to party
more two-step, kick step and movin’ your body
more packin’ the floor, more Bumrushin’ the Door
more bein’ too legit to quit, comin’ back for some more
more politickin’ when we’re kickin’ and givin’ where we’re livin’
more havin’ faith in our culture like it was a religion
more lettin’ ’em witness the strength of street knowledge
more wisdom in the rhythm and just more goin’ to college
more of the past 30 years stakin’ a claim and makin’ a name
more of makin’ a change and 30 more of the same”