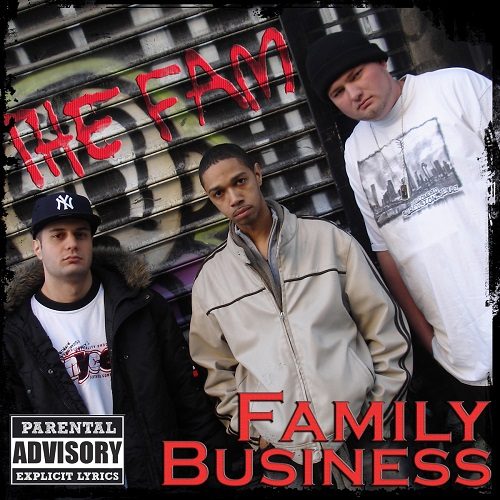 Ghostface Killah once said that “family ain’t family no more”. Apparently, this crew missed that memo. The Fam was conceived over half a decade ago as a loose collective unit. Timid has lived all across the country, but calls Hawaii home, Pizon hails from New York, and EJ represents Galveston, Texas. Prior to this latest effort, the now tightly knit trio released the pre-album mixtape “Family Affair”. To keep things fresh, The Fam utilizes a myriad of producers, including a few notables, such as Kon Artis of D12 fame and Domingo.

After a short intro, the album kicks off with “Get Off My Ass”, which features and is produced by the aforementioned Kon Artis. The track is basically about having the desire to get up, get out, and get something…as Goodie Mob would put it. The Anthony Asare produced “Inferno” addresses the fire burning inside those that are trying to make a better way from themselves:

“Punch the clock, eight hours of my day, given away
To someone else, gettin’ that pay, to have a place to stay
Another eight to the resting, so I can start another day
So that’s sixteen used, leaving me with another eight, but wait
About an hour each way, comin’ and goin’
Clothes, hygiene, which jeans keep the freshness flowin’
So of my twenty-four, eighteen for you, six for my life
Someone shed some light, this math can’t be right”

A brief interlude produced by Kno of the CunninLynguists leads into “Dreams Come True” which features Jacob on the hook. Honestly, the joint sounds like a stripped down version of Jay-Z and R. Kelly’s “Fiesta” remix. Later in the album, we get “Dreams Part Two”, it comes off a bit smoother and features Fedarro (a singer who sounds eerily close to Ne-Yo) on the hook. Upon hearing the Gary Botello produced “Mother Said Son”, most will immediately think of Crucial Conflict’s “Hay”, which also contains samples from the Funkadelic song “I’ll Stay” used here, as The Fam asserts that mama knows best:

“Mother said ‘Son, you’re gonna reap what you sow’
I said ‘So, it’s just a debt to the reaper I owe’
Little did I know, I’d sink deep in that hole
Beggin’ a jailhouse mirror above the sink for some hope
Just starin’ at the phone, but I don’t wanna call home
But every time these cops talk, I wanna break their jawbone
It ain’t they fault though, that I’m in these litigations
Hearin’ inmates blaming people for their situations
That’s the bond between the thieves, they can con a million peeps
And still don’t feel the need to take responsibility
A bunch of war stories about the dirty Bureau tricks
A seventeen year old man, with thirty year old kids
Calling friends, might as well have been a bomb threat
Nobody will cover a man in a hole like Con Ed
Picked up the phone, slowed my ego on hold
And mother said ‘Son, you’ve had to reap what you sowed'”

Group member Timid gets behind the boards on the posse cut “Long Hard Road” which features Bam Bam, Aday, and I-Dog. “Devil On The Doorstep” is produced by Zebrahead and addresses what The Fam perceives as societal evils including greed, vanity, materialism, elitism, and so forth. It is a departure from most of the other material on the album and certainly shows The Fam’s versatility. “Family Business” closes out with “Fix Your Face” and a remix of “Homegirl”. The former features a trumpet fanfare that slightly reminds me of M.O.P.’s “Ante Up.”

For a group with backgrounds as diverse as The Fam’s, it can be seen as quite the achievement for them to be able to mesh together so well. Far from dysfunctional, perhaps real families can take a hint or two from The Fam and come together to make it all work. Perhaps those families need to get into the studio and cut an album. Just a thought.