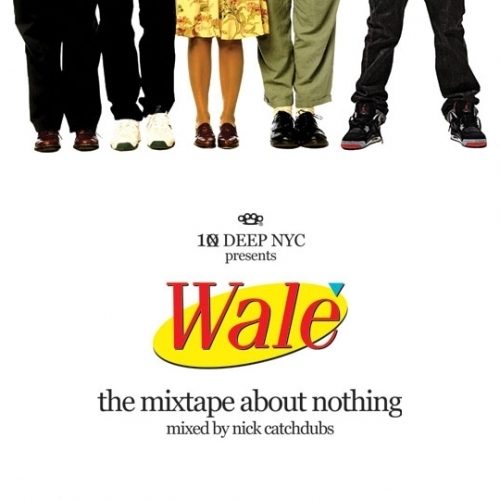 Wale :: The Mixtape About Nothing

This mixtape starts off with a lie. This mixtape is about a huge variety of things. It’s about money, fame, sex, race, love, art, and hip hop, to name a few things. The lie is as understandable as it is misleading; while it certainly is an eye-catcher, no listener should think that Wale has nothing to say. A more accurate title would be “The Mixtape That Isn’t About Anything Specific,” which no doubt is the reason for the album’s misnomer.

Make no mistake, Wale has enough on his mind to make this much closer to “The Mixtape About Everything” than its current title. For those who don’t know, Wale is an up-and-coming rapper from D.C. who is known for creative, humorous flows over catchy beats. His “100 Miles and Running” Mixtape from 2007 was better received than most commercial hip hop albums – it’s sheer energy made it something of a quiet classic, especially within the area. This effort sees Wale coming down from that free-flowing spirit and embracing a more measured and thematic tone.

What separates Wale from the pack is his sheer charisma. He’s constantly playing with and expanding his lyrical and verbal repertoire, switching up his vocal patterns to go with his punchlines, allusions and asides. This is the strength that holds his music up to repeated listens, which is perhaps only surpassed today by Lil Wayne, who appears on “The Cliche Lil Wayne Feature” (go figure). Wale does well, but then Wayne, as is very cliche, steals the show:

Naked women rub my back and ask me how was my night
I say, “Bitch, stay out my business!”
When we fuck, she say, “Just stay out my kidneys”
I say, “Don’t say it if Simon didn’t!”

Every song of the album begins with “The,” and then a reference to the song’s concept. For example, the highlight song of the album is “The Kramer,” based on it’s namesake’s infamous race rant. Wale frames the song on that rant, and uses it as a launching pad for his take on the word “nigger,” and its positive and negative aspects.

Every song has a theme, whether serious, joking, political or personal. As Wale says, “I ain’t trying to be conscious, I’m speaking heart with a conscience.” In all of it, Wale simply exudes confidence. It takes somebody with a complete confidence in his abilities to declare that “God gave me wisdom, and you disbelievers atheist,” let alone pass it off as casually as he does. He blazes through every line with an excitement and the pure craft of it, as if he’s afraid he’ll never get a chance to rap again.

Another of Wale’s strengths is his ability to integrate his poignant moments into his humorous ones and vice versa. In less than a minute, he interrupts a contemplation of his burgeoning fame to “lyrically put a gun to your ass and start bustin’ off ’till my words short as my breath” in “The Star.” Then, he switches on a dime between the boast of “The Freestyle” to give us “The Perfect Plan” for saving hip hop, which can be summed up with, “buy a album.”

“The Mixtape About Nothing” presents us with a myriad of original and re-done beats that escalate Wale’s natural excitement into a listen that can be jarring at first listen. All of the beats are appropriately up-tempo, appealing to Wale’s Go-Go influence, but the songs shift theme and tone very suddenly throughout the album, and there’s no doubt that it’s intentional – the aim here is to cultivate a sort of ordered chaos.

Wale fashions himself as unapologetically and unfailingly himself, and there’s little here to contradict that. He’s not a creative trailblazer, but he’s somebody with an unmistakable voice and artistic identity, and that’s something that makes “The Mixtape About Nothing” a blessing to hear. Wale’s unpredictability has us on the edge of our seats, wondering what will happen next, and this mixtape is just a teaser of what’s to come.

Wale :: The Mixtape About Nothing
8.5Overall Score
Lyrics8.5