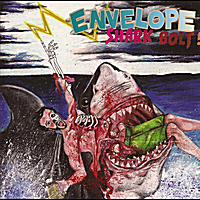 Here is an interesting album for you. Never heard of Envelope, and never would have but for RapReviews (that is one of the beautiful things about this institution). To summarise, he has a delightfully dull back-story, hails from WhoTheFuckCares, Ohio… and the boy can rap a bit too. The last part is all you need to know, as his skin colour is irrelevant, the demographics others would target can fall into the sea for all he cares, and he has made a very solid LP, devoid of clichÃ©.

Here is a rapper spitting about just being himself. Yes, it really is as simple as that. Personally, I find myself unable to remember the last time I listened to a piece of music about a normal person (I shall refrain from using the term “everyman”) just delivering verse after verse of impressive lyrics about their ACTUAL life. The great irony is that this is what many underground rappers think “real” hip hop is, but fail dismally time after time in attempting to create such music. This isn’t a straight up autobiography, but it is a talented MC writing about issues that are prevalent in their life – it can’t always be Maybachs and ki’s, you know.

Underpinned by a solid if slightly uneven soundtrack – laced by just one producer, Blueprint – “Shark Bolt” is a concise thirteen track offering, with more than half of the songs clocking in at under three minutes. As a result, it flies by, and you reach the halfway point of the charming “Straight Up” in no time at all. Other highlights include the excellent “Daydream Nation,” sleeper “Ain’t Shit Changed” and the soulful “Oh Lord You Know.” Not every song is a winner, as the Garageband-esque title track sounds a touch lazy, musically speaking. But for the most part, this album is a shining example of stumbling into talent.

It never ceases to amazes me just how many good rappers there are in the world. Just when you listen to another mainstream disappointment, along comes a little something that may not be entirely revolutionary, but still makes you believe. That isn’t to down commercial rap, but rather to highlight that artists such as Envelope understand the point of “real” music – they can see into the heart of truths, and convey it to the listener in a skilled and meaningful way. A lot of MC’s out there could learn a thing or two from Envelope, as his blend of occasional lyrical complexity and down-to-earth trueness is a winning formula.