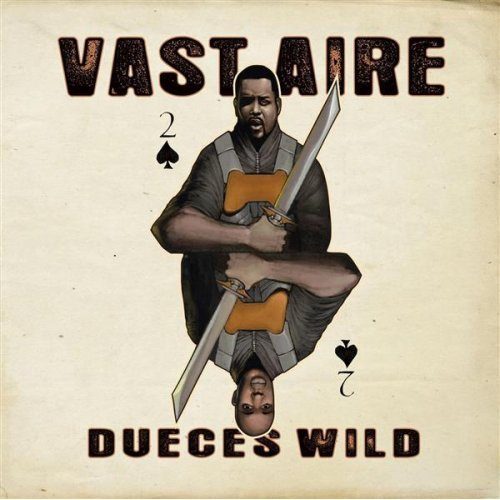 Arrogance is implied in the artist’s name. VAST, AIRE. Limitless space to breathe. No label has been able to contain the vast expanse of his repoitoire. He did a stint on Def Jux as part of Cannibal Ox, bounced to Chocolate Industries for the seminal solo release “Look Mom… No Hands and even stopped for a minute on Eastern Conference to collabo’ with Mighty Mi. Aire comes across as perpetually unsatisfied with his options while opinions on his rap style remain perpetually in flux. Some see him as the cutting edge of verbal pugilism while others like site contributor Matt Barone have noted he is “flying over listeners’ heads with lyrics that go beyond being intelligent to becoming unintelligible.”

No matter what aspect of the spectrum you fall into, there’s no question that Mr. Aire has a cult following as vast as his name in the underground. “Dueces Wild” won’t perplex them at all, but the title alone threw me for a loop when writing a review. That’s not a typo people – Vast Aire has intentionally spelled the word “deuce” wrong and repeats that usage throughout the artwork and binding. I can’t fathom why a rapper with a reputation for being verbose (i.e. NERDY) would make such a mistake, so the only assumption one can make is that it purposefully implies a deeper meaning than at first meets the eye. The easiest way to get over that contradiction is to rip off the shrinkwrap and throw the disc in, where you’re immediately hit over the head with the echoing and futuristic guitar sounds of “You Know (You Like It)” produced by Le Parasite. Vast Aire’s unorthodox, intelligent and humorous flow is in full effect from 50 seconds in:

“Man, I run up on you with karate chop
Got you fallin out your A-di-das screamin E-AHH-AHH
You ain’t seen it ’til I rocked the spot
Watch the stars as I connect the dots
That’s how it is player; that’s the game, player
You’ll see God as you gaze at an ash trayer
Don’t hate the gun hate the shooter
Don’t hate the sword, hate the swinger
Cause I’m something like a phenom-e-non
I hit you with a beam of light like phenom-e-non
I got a flow that’ll probably go on-and-on
‘Til the fat lady starts to yawn-and-yawn”

Things aren’t any less dope or witty on the very next track, the Melodious Monk produced “T.V. Land.” Aire is more than happy to mix references from cartoons, sci-fi and kung-fu classics all together into one far ranging rapisode.

“This ain’t +Parker Lewis+ but you gon’ lose
Cause I can do karate in platform shoes
Hold your breath ’til your face turns blue
I’m like Dolemite… mixed with Doctor Who
With a little bit of Sonny Chiba, I like to smoke cheeba
I keep a fly bird, then I tie my sneaker
… You need to keep your mouth zipped
If this was pre-school, I got the cheese nips
I seen Popeye get done in (uh-huh)
Survival of the fittest, we will eat your spinach
I think Olive Oyl tried to mix in
Her ass got broke cause she was too thin!”

Mr. Aire’s cleverness as a lyricist is set apart from his peers in several ways. There are no Canibus style prophecies in Aire’s raps – no predictions of the end times or searching for secret societies that control our daily lives. Aire doesn’t try to outspeed the next man or show off an incredibly nimble lyrical dexterity, meaning everyone from Gift of Gab to Twista can blow away his breath control. If anything Aire’s raps are plodding in speed and deliberately delivered, which works to his advantage by allowing you to focus on his punchlines. Stylistically he has the most in common with Thirstin Howl III and Mr. Lif, combining the humor of the former with the quirky but catchy flow of the latter. Ironically Geechi Suede from Camp Lo seems to be doing his best impression of Mr. Lif on “The Dynamic Duo,” a Justice League inspired track where V transforms into a superhero named VAST-MAAAAN but only uses his powers to score punani and blow away weaker MC’s. There’s no doubt he’s serious about the microphone craft though when he tag teams with Copywrite on “Gimme Dat Mic” or flows to a Pete Rock beat on “Mecca and the Ox,” reuniting with Vordul Mega for a song straight from the vastness of outer space.

Those on the fence about Vast Aire as an underground lyrical genius may not be inclined to hop off by “Dueces Wild.” Aire intentionally masks the deeper thoughts percolating in his brain by using humor, but on storytelling tracks like “Back 2 Basics” the A to B style and off-beat breath control come through no matter how much he tries to disguise it. There are thirteen tracks to lunch on here with very little filler or byproducts in the slices, and the biggest surprise may be that the normally reliable Oh No turns in the album’s weakest beat on “Lunch Room Rap.” Vast Aire is not afraid to set a mood on songs like “The Crush” by letting the instrumental go for nearly a minute before jumping on the beat. Whether those kind of styles go beyond your typical conception of hip-hop or not is an individual choice, but there’s no doubt his approach will still leave some people behind no matter how slowly he drops the bars. There’s nothing traditional about “Dueces Wild,” including the spelling of the album’s title, except for the hip-hop tradition of being creative at all costs whether the masses will get it or not.