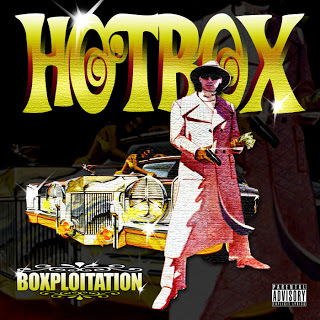 After his first official LP “Frostbite” dropped last year, seems that the self-proclaimed “funkiest high school math teacher in Canada” Hotbox has kept busy on the production tip. “Boxploitation” is a free 20-minute downloadable album that serves as a friendly reminder of his dopeness behind the boards, before he drops another LP later this year. The offering samples both dialogue and soundtracks from a variety of Blaxploitation films from the 70s, so from the gun you know its going to be a soulful platter. The producer doesn’t disappoint, serving up another collection of delicious morsels that showcase mastery of sampling and collaboration, teasing us like a plate of chicken wings until a more proper main course can be consumed.

Things jump off with a joyous soul vocal loop and cascading drums, giving a good indication of the party on wax that will ensue. Like last year’s “Frostbite,” Hotbox once again constructs a uniformly solid mix of boom bap beats, and then brings in a stable of trusted MCs to do their thing. Radar starts it off by dropping facts on “Knowledge is Wealth” before coming back with Lee Fitz on the monster club banger “Yee Haw.” Whereas last time out Hotbox excelled at classic mid-tempo hip hop but struggled with more dance-oriented fare (at least in this writer’s humble opinion), here he shows marked improvement, with a track featuring a menacing organ and oppressive bassline (in the vein of DJ Toomp).

After another vocal sampleâ€”the likes of which act to further unify the product thematically, with descriptions of the drug game (crack game = rap game) both celebratory and cautionaryâ€””Squeal Snaps” (a perfectly descriptive title) comes in with pure old school joy. Featuring a timelessly funky drum loop, an ecstatic horn sample and shameless braggadocio, the first half of the song recalls a time when records could feel purely good-timey without being corny or overly simplistic, while the song’s last third flips the track into a more somber beat for Mischif to rapidly run game: “Join me on this Odyssey/ it’s something that you gotta see/ my Mobb is Deep/ I cause Havoc and I’m a Prodigy.”

The second half features more feel good upbeat numbers but also some plaintive material. The triumphant second half of “One Life to Live” is superb, while the last track features a late-night feel and film noir narrative that’s less effective than the straight up shit talking and thoughtful insights found elsewhere, but interesting enough to be a worthy inclusion. Throughout the project, the half dozen MCs mix consciousness tempered with humor and a love of wordplay, feature assured and relentless flows, and aren’t afraid to be both confessional and silly for the sake of a deep insight or clever rhyme. The occasionally stilted flows or hook refrains are overlooked in favor of majority mic mastery.

Despite the absence of straight instrumentals, this remains a producer’s album, so in many instances the featured vocalists are given one hot verse. Appropriately, each one spits with the fierceness, rapidity and efficiency of an assassin, and the lack of breathing room is effectively offset by Hotbox’s airy production flourishes. The beat constructor is successful in wringing out the potential of his chosen soul soundscapes, both their exultations and wringing sorrows, in the handful of tracks on offer. He remains first and foremost a master of boom bap drum loops that sound both classic and fresh out the box (no pun intended). So keep your Kanye and your Trackmasters, I’ll take the soul-sampling Hotbox everytime. Being a free offering with an embarrassment of riches in its short 20 minute run time, I invite you to do the same.