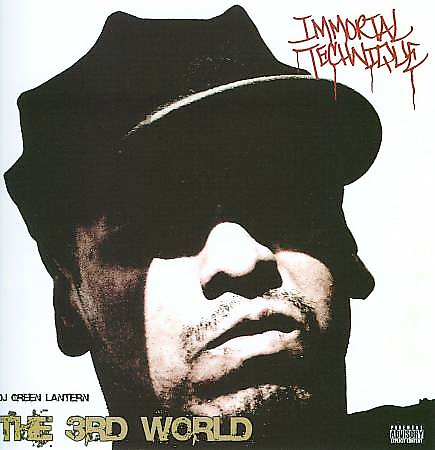 Immortal Technique could be a polarizing figure in hip hop, if he ever got enough widespread recognition to inspire the fervent emotions his music inevitably provokes. A revolutionary who proudly wears this tag as a badge of honor, Immortal Technique is a Peruvian Harlemite whose raps are a means to an end, designed to enlighten and enrage you out of complacency and into action.

He also happens to be quite a skilled rapper, a fact often overlooked in discussions about his provocative political statements. On “The 3rd World,” he seems to have finally found a comfort zone in the balance between lyricism and message, meaning that neither aspect seems forced or highlighted at the expense of the other. Whereas on his first album he occasionally seemed intent on proving his MC bona fides with lyrical tongue twisters, and on his second he leaned more heavily on conscious themes, on his latest release he has merged both aspects of his persona beautifully. As a rapper, he has stepped his game up, which is saying something since he was good to begin with. For one thing, his breath control is much improved, as is his apparent comfort level with his role as hip hop’s ambassador for the downtrodden.

Despite the fact that this is all new material, it is a mixtape, which means that it is indeed “mixed,” with certain lines rewound and played back again. It can be annoying at times, but it’s pretty minimal by mixtape standards and doesn’t detract much. It is also a collaboration with DJ Green Lantern, whose recent work with Nas on “The Nigger Tape” has been making waves as well. This connection, as well as both rappers’ political themes, begs a comparison between the two. While both MCs provide valuable conscious insight, their differences can be summed up in their stances toward Barack Obama. While Nas has dedicated a song to the hopeful next president, in which he ponders Obama’s power to reignite interest in politics among black youth and heal racial wounds, Immortal Technique takes a more cynical view of Obama’s ability to bring about serious change, subordinating a potential black president’s power to that of economic structures:

“But on a positive side, I think Obama provides
hope and challenges minds
of all races and colors to erase the hate
and try and love one another, so many political snakes”
– Nas, “Black President”

“And they might even have a black president but he’s useless
Cuz he does not control the economy, stupid!”
– Immortal Technique, “The 3rd World”

With this kind of venom to spit, he has no trouble filling all 18 tracks with powerful material that is earnestly and skillfully delivered. He kicks things off with “Death March Intro” featuring Green Lantern, taunting his detractors, “I’m like the legs of a paraplegic really / Cuz I’m still a part of you even if you can’t feel me.” The menacing orchestral strings and military snares set the tone for the rest of the album musically, which follows Immortal Tech’s lyrical attitude in its dark yet high-powered aural qualities. The grand scale of “Golpe de Estado” is aided by the sample from Nas and Jay-Z’s “Black Republican” but with some noticeable key changes throughout. This song is rapped entirely in Spanish by Immortal Technique, Temperamento, and Veneno, and it is one of the most striking tracks on the album. If possible, Immortal Technique’s delivery is even more biting in Spanish and his lyrics are just as fierce, while the guest MCs capably keep the revolutionary vibe going. To his credit, Immortal Technique manages to keep the topics new and interesting even while maintaining his focus on the political. You wouldn’t think anyone could make re-zoning sound like such a compelling topic, but he does so easily, focusing on the injustice in red-lining practices and gentrification on “Harlem Renaissance.” This is about as mellow as things get on “The 3rd World,” as the track’s swaying strings and hand claps belie the song’s serious content. Some more improbable topics get raised and killed on “Lick Shots,” which features Chino XL and Crooked I, who both drop stellar verses. Crooked I actually steals the show here, especially with memorable rants about right wing pundits (“gun pop off like the mouth of Ann Coulter”), religious doctrine (“They wanna get rid of this conscious crook / Like I’m a Gnostic, apocryphal, non-canonical, Gospel book”), and historical duplicity (“I’m black as them ancient Egyptians / before European historians went and changed the description”).

Green Lantern’s panicky flutes and percussive clicks give “The 3rd World” a solid bounce that underscores Immortal Technique’s invective against corrupt American meddling in his Central American homeland, as he proclaims that “the only place democracy’s acceptable / is if America’s candidate is electable” and mourns that “Rico laws don’t apply to the CIA.” On “Hollywood Drive By” he begins to develop the metaphor of underground hip hop as a cultural Third World, looked over and mistreated by the superpowers of the music landscape, and on his “Watchout Remix” he further explains his role in the trenches of this impoverished cultural zone:

“And everybody talkin bout the south takin over
It’s true, motherfucker, but it’s comin over the border
Fuck your chain, my people’ll kill you for water
Fuck fans, nigga â€“ I got soldier supporters
that’ll cut your throat if you strapped with a tape recorder
That’s right, motherfucker, welcome to the New World Order”

Amazingly enough, this just gets you to the halfway point of the album, and things don’t let up from there. On “Open Your Eyes,” he lets loose another spoken diatribe akin to “Beef and Broccoli” and “The Message & The Money” from his earlier albums, this time focusing on the U.S.’s not-so-helpful relationship with Latin America and underlining the parallels between exploited nations and below-the-radar hip hop. “Payback” finds him sharing mic duties with Diabolic and a razor sharp Ras Kass, discussing all the payback they would exact from the world’s evildoers. This is one of the few times the political posturing gets slightly out of hand and out of context, as Diabolic vows to “have the First Lady beat me off till my semen’s launched / and I skeet across her face like Peter North.” I don’t necessarily feel any protective impulse for Mrs. Bush, and I suppose it could be viewed as tit-for-tat retribution for white males’ mistreatment of women of color throughout history, but it comes across more like a standard misogynist rap taunt: showing your own manliness and emasculating your opponent by violating “his” woman. The fact that I can single out this moment as crossing the line, though, shows you that Immortal Technique and company know how to convey their revolutionary discontent effectively and without resorting to mere shock tactics.

Toward the end of the album, Immortal gets a little more reflective, but he has clearly taken to heart the mantra that “the personal is political,” because even on seemingly autobiographical songs like “Mistakes” and “Parole (Evil Genius Remix),” he manages to inject social commentary. His first person account of a soldier “on patrol in the desert right now” on “Mistakes” is particularly poignant, and the tremulous organ and bluesy sample help set the rueful mood:

“I joined the Army lookin for money to go to college
But they ain’t pay me a quarter of what they fuckin promised
Extendin my tour, treatin me like a sucker
That’s the reason officers get fragged, motherfucker
Don’t give me speeches on how you respect and you love me
with no body armor and a lightly armored Humvee?
My family’s lonely, and you want me to re-enlist for thirty grand, homey?
NO. (I made a mistake)”

If this review is long-winded, it’s because the album is as well, but somehow it never becomes tiresome. As expected, Immortal Technique’s emotional range runs from pissed off to spitting daggers, but he has learned how to make this style work for him by crafting well thought out rhymes to convey his weighty messages and selecting beats that match his righteous fury. While not everyone will agree with his political perspective (full disclosure: I usually do), you’d be hard pressed not to admire the sincerity and commitment with which he expresses it. If you can acknowledge that, then you should definitely pick this one up, “pa’ que viva la revolucion.”