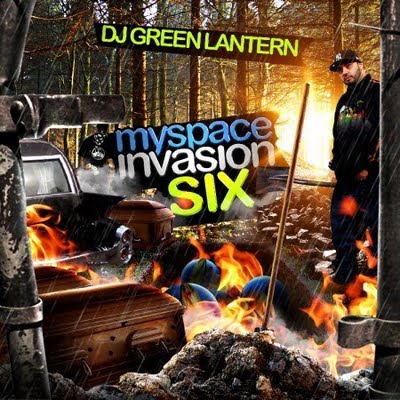 As the title suggests, this mixtape features unsigned artists who are on MySpace. The title of the series probably made more sense when it started a few years ago back when MySpace was the king of the social networking block. It’s been beat out by the leaner, richer, whiter Facebook, and the million other social networking sites that have sprung up. Lantern even acknowledges that MySpace is on its way out in his between-song banter. It’s still a useful tool for musicians, though, and offers artists a relatively easy way to post their songs online. Even established artists often rely on a MySpace page over having their own website.

As a listening experience, “DJ Green Lantern Presents MySpace Invasion 6” feels like a club mix. Each track is about two minutes, and it’s filled with sound-effects and voice-overs by Lantern (“GUESS WHO’S BACK MUTHAFUCKAS?!?!?!?!?! CH-CHCK BOOM!!!!!). He has collected thirty-four tracks by forty-four different rappers from all over North America. Out of forty-four rappers, I recognized exactly TWO: Bilistic and Komplex, part of the New Life Ryders crew that I reviewed three years ago on this very site. They weren’t my thing then, they aren’t my thing now, and the same holds true for the bulk of this mixtape. None of it’s terrible, but the vast majority of rappers are forgettable. Sure, the MCs are hungry and they are decent rappers, but they sound like a million other rappers on a million other mixtapes, with very few standing out.

It’s the rappers that do stand out that make this mixtape worth a go-through. Elohim Marino,’s “Ego Trippin'” is a nice take on Lupe Fiasco-style geek rap. He’s got some releases that I’m looking forward to checking out. Mafia Black nails post-Tupac sensitive thug rap, with a nice acoustic guitar beat by the unfortunately named Supa Mario (that’s a lawsuit in the making, friend). Tampa rapper Amun Ra delivers some decent Wu-inspired rhymes, and Money Hoop’s “Bars” recalls classic NY underground rap. Chicago’s LSTREETZ is the sole female rapper on here, and one of many rappers who copy Lil Wayne’s over enunciated Martian style.

Lx Traq’s “What It Is,” featuring Tre 100, is one of the better songs on here. Traq is a 17-year-old Angeleno who spits at a deliberate monotone and is backed by a crazy beat built around snippets of women’s voices. It’s a little like the Pack’s “Vans” only with better lyricism. Klassick ft. K-Prime offer up “Can’t Stop,” which has some of the better rhymes on the disk, and a nice beat by Jus10 Gotti, in which he chops an Al Green sample up until it’s begging for mercy. They come up with my favorite line: “One time for everybody who’s trying to find a better way to stay away from hustlin’/And they figure out it’s a lose-lose every time cuz that fork in the road leads to death or doing time.”

So out of thirty-four tracks and forty-four rappers, I discovered two or three rappers with serious potential, another five or six who I’ll keep an eye on, and thirty-five who I’ve already forgotten about. Not bad for the price of an hour of my time and 100MB of hard drive space. “MySpace Invasion 6” is a nice sample of some of the unsigned artists out there who are trying to make it.