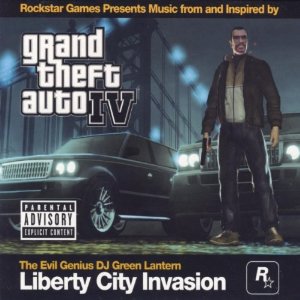 DJ Green Lantern’s name has been buzzing a lot in 2008 given he has been producing tracks for everyone from Immortal Technique to Nas and released the latter’s “Nigger Tape” in advance of his “Untitled” album. That’s nothing new for Lantern though, the one-time official mixtape DJ for Eminem and his Shady Records imprint, the man who has featured original and exclusive songs on his street albums for everybody from Mobb Deep to the Beastie Boys. There’s no question Lantern is New York to the death in focus, but where some mixtape DJ’s might focus on mediocre wannabe gangsters from the five boroughs Lantern’s rep and production skills leads to an end product that is 4 out of 5 times better than the average. When you consider just how many mix releases there are out there even in 2008, being better than the competition 80% of the time is pretty damn impressive.

It comes as no surprise then that Rockstar Games came to Green Lantern to host one of the radio shows heard while you’re driving around Liberty City in Vice City back in 2002 to San Andreasin 2004 among others. Even though you can select a wide variety of genres to listen to on the radio once you jack a car, hip-hop has always been my favorite by far, and one might suspect from the environment of the games that the producers feel the same.

It’s advantageous that Lantern produced all 17 tracks on “Liberty City Invasion,” not only because it makes this compilation easier to review but because it gives this soundtrack a consistency you wouldn’t find with a dozen different heads bringing their own beats. The story of GTAIV is fairly heavy – a man escaping war torn Eastern Europe hoping to find the American dream, only to discover the dream is a nightmare of violence and bloodshed not unlike what he left behind. To make an appropriate contribution to the video game, let alone make an appropriate sounding official disc, Lantern needed to make the music equally violent and dramatic. Let’s just skip the cornball moralizing right now – both the game and this album are for MATURE audiences. If your children are playing Grand Theft Auto that’s either the fault of the retailer for not enforcing sales restrictions or the parents for blatantly ignoring the ratings. One could have a much broader debate on whether or not the game reinforces the stereotype of hip-hop as violent or vice versa, but 30+ years ago one would have had the same debate about whether “The Godfather” reinforced stereotypes of Italians as criminals and gangsters. In short I would suggest you take entertainment with a grain of salt in either case, and if you’re old enough to realize that Sylvester Stallone is not Rocky Balboa when you leave the theatre you’ll be aight. Therefore it shouldn’t come as a shock the first bars uttered on the album by Styles P on “What’s the Problem” are as gruesome as a horror movie:

“Yeah it’s the hardest out
Cut you up, throw you out on the day I put the garbage out
In the Glad bag or the Hefty
Come shoot with the lefty, nobody test me
Told you I cut class, and you from your ear to your mustache
Fuck around nigga you’ll be swallowin crushed glass”

Lantern’s beat is just as ominous as Styles’ rap, stripping away ivory keys to bang on the ebony ones all the way on the left hand side. Busta Rhymes is no less brutal on “Where’s My Money,” giving “Liberty City Invasion” a perfect 1-2 punch on the first two songs, perfectly echoing the struggles of Niko Bellic in a landscape riddled with violence. Like getting unlimited ammo for free without using a cheat code, it’s almost impossible for “Liberty City Invasion” to keep up the high standards set so early on, yet Lantern keeps firing hit after hit here with only a few bullets being blanks. Wyclef and Mavado play the role of Carribean top shotters in setting up Uncle Murda for a star performance on “Informer,” a track which will permanently erase all memories of Snow. Joell Ortiz and Dante Hawkins talk about what it’s like to be “Alone” in a city of millions over a gritty buzzing bassline. “Bustin’ Shots” is a superstar DipSet collabo’ between Jim Jones and Juelz Santana that even non-DS fans can get into thanks to Lantern’s whistling melody and cop sirens. The first track to slip on the entire presentation is Maino’s “Get Away Driver,” which seems weak compared to more recent Maino offerings like “Hi Hater,” although I’d be lying if I said I was a huge Maino fan in the first place.

There’s plenty to like about the rest of “Liberty City Invasion” though from the Akon, Fabolous and Fat Joe collabo’ “I’m So Fly” to the closest thing Lantern gets to the South on “9mm” featuring Clipse and the Re-Up Gang. The album really peaks towards the end with hardcore underground New York tracks – the kind of rappers newcomers to Green Lantern or the GTA franchise might not have been familiar with before now. Big up to Lantern for featuring Boot Camp family members Buckshot and Heltah Skeltah on “Can’t Trust ‘Em” and Immortal Technique on the closer “Parole,” a song which despite its heavy backdrop offers a glimmer of hope in the dark and cloudy lyrical landscape as Technique “transform gangs and criminal enterprises usin O.G.’s as advisors” to become a powerhouse in the POLITICAL landscape. “Liberty City Invasion” is bloodsoaked, brutal, gritty and hard-hitting and thus PERFECT for the game which inspired it. While both may draw condemnation from the critics many psychologists have argued that a fantasy escape through violent imagery may lower one’s actual tendency to exhibit violent behavior. Again I’m not here to argue about the morals of the game or the music, but if you’re going to tell me that the violence of either one is wrong, I’ll point out the “good old days” people like to talk about weren’t so good. If you can find one century of human history without war, poverty, suffering or out and out genocide, good luck. Shakespeare’s plays had just as many murderers, killers and thieves as a GTA game, so if you ask me entertainment is all relative and people ought to just stop whining and do something more productive with their time or at least take an hour out to actually play what they’re complaining about.