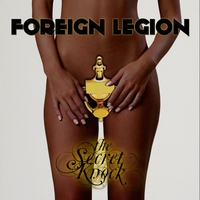 Foreign Legion is the kind of hip-hop crew that will either be immediately familiar to our loyal readers or completely obscure to 99% of random websurfers. There’s no middle ground at all. In my own case it doesn’t help that the crew’s name automatically makes me think of Foreign Exchange, a one-off project between producer Nicolay and rapper Phonte from Little Brother that for me still gets rotation years after being released. For hardcore fans of the Legion, I imagine seeing a Foreign Exchange album on store shelves must have had the opposite effect. Legion had already released two CD’s before Exchange even existed, the seminal “Kidnapper Van: Beats to Rock While Bike-Stealin'” and the equally well regarded “Playtight.” Even if you’re absolutely clear on who’s who and feel no confusion either way, Foreign Legion has been plagued by a very familiar curse of dope up-and-coming rap acts – label drama and mainstream obscurity. Marc Stretch and Prozack Turner have bounced from spot to spot trying to get their shine on, and the latter had an entire solo album get shelved when Dreamworks Records folded. It’s a constant struggle that can seem fruitless when you tour constantly, receive critical acclaim everywhere you go and still have nothing but lint in your pocket to show for it at the end of the day.

This frustration is made abundantly clear on Foreign Legion’s new EP “The Secret Knock,” but not in a negative sourpuss way that would be a huge turnoff. Hip-Hop already has far too many underground rappers whining about how they’re dope but can’t get paid – and while it may be actual and factual that doesn’t necessarily make it compelling and interesting. Instead this California tandem vent their frustrations in a more fruitful way by making breezy, soulful hip-hop songs like “Fresh Air.” Once fading hopes rise from out of the gloom as Prozack looks at the fact they survived through the long years:

“A lot of cats quit rhymin, put they time in
Hawked they chains and cars, sold they diamonds
Gave up they turntables, sold ’em on eBay
Retired then passed the baton like a relay
Burnt out and broken like a politician’s promise
I’m not quite conscious when I rhyme, but I’m honest
The less things change the more they gon’ stay the same
I write songs from the heart to erase the pain
Maybe I should go to Vegas, put my money on the haters
Maybe I’m just disillusioned, thinkin I can make it
I’m up for the challenge”

Stretch and Turner prove to be repeatedly up to the challenge throughout this short but dope EP. “Man of the Streets” is a smoothed out hip-hop jazz track, and that’s not a bad thing at all when Stretch welcomes you “to the Legionnaire lounge” where you can kick back to their mellow melody and effortless breath control. Unfortunately this was initially a bit confusing given it’s the fourth track on the CD yet according to the album’s back cover this song is “Piano Banger.” This is either a printing or a mastering mistake because “Piano Banger” is actually this EP’s third song, a hilariously raw Introbeats track where Prozack Turner vows he’s “hung like a donkey” with more lyrical “flows than a hemophiliac in a mosh pit.” All of the other tracks seem to be correctly labelled though, including G. Koop’s two strong contributions on production – the strong closer “Love of the Game” and the finger-snapping “Ain’t the Same” where Stretch reminisces about how he got his start as an artist:

“Circa ’88, made my first tape
Got my first taste, the kid was bitten
Written words comin through the Radio Shack
+Lyte as a Rock+, pause tape loop in the back
Troop shoes on the rack, fresh to death a b-boy
Young rhyme mind before his primetime still
poppin for change, pop stop on the court
Fightin for props, callin out, I GOT THE PORCH
Nice on the court, twice as nice as the cats
Had no idea that my life would be raps”

The compelling thing about Foreign Legion throughout “The Secret Knock” is how unpretentious and down-to-earth they are on song. While they can spit a braggadocious or punchline rap when it’s called for, their biggest concern is clearly marrying the perfect beat with precisely the right rhyme. It’s all about the harmony between beats and flows and the easy to relate to heartfelt narratives, which speak to both other rappers in the game and the listener who may have never picked up a mic but is still a fan of dope music and dope raps. There’s really only one bad thing to say besides the printing errors on “The Secret Knock” and that’s such a minor quibble it’s entirely forgiveable here – that one bad thing is that six tracks just aren’t enough.