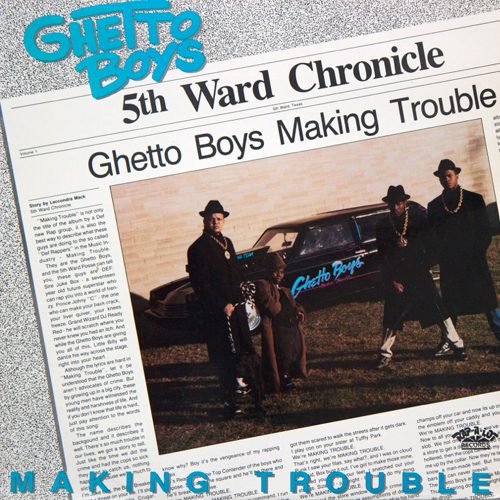 Here’s a trivia question for all the old school hip-hop heads out there: “Who is the longest running member of the legendary Houston rap group Geto Boys?” If you said Willie D because you thought it was a trick question, BZZT wrong. If you said Scarface because you thought it WASN’T a trick question, BZZT wrong again. The correct answer is actually the group’s most diminutive member, one Richard Shaw b.k.a. Bushwick Bill. Even though the cover artwork for the album “Making Trouble” is blurry and poorly printed, you can clearly see Chuckwick standing right in the middle flanked by DJ Ready Red, Jukebox and Prince Johnny C.

Yours truly is not on the pipe. Believe it or not this is the ORIGINAL line-up of the Geto Boys, who were actually known as the more grammatically correct Ghetto Boys back in the day. Reprints of this obscure album have since changed the spelling, largely to put unsuspecting purchasers in the frame of mind that Bushwick, Scarface and Willie D are responsible. It’s fair to argue that the Geto Boys lineup has been in flux a lot of the time (Big Mike replacing Willie D for example) but when one thinks of classic GB past or present these three men come to mind. If the fact that only one of these men is visible on the album’s cover wasn’t a tipoff, the fact they’re wearing gold chains and fedoras a la Run-D.M.C. certainly should have been. The truth is they don’t just look like Run, D and Jay, they SOUND like them too. The original Ghetto Boys were Houston’s answer to the Hollis, Queens crew’s soaring popularity in the 1980’s, and on songs like “Why Do We Live This Way” the synths, sound effects and scratches couldn’t possibly be more New York. Here’s Teddy Ted, I mean Ready Red, rapping like Kurtis Blow’s long lost identical twin:

“Can you take it? How can I be strong
When I see many things in the world is wrong?
You know the love in the hearts is a thing of the past
And living like this, how long can we last?
Some are content to the way things are
Well not me, you know the road is far
Take off your blindfolds and start to see clear
Time’s windin down, and the end is near
Be speakin fact not fiction, pay attention
Our world is in, a critical condition
Understand prejudice, is rumor and lies
And over this evil, that many people have died
You know what blood’s been shed over he-said she-said
I don’t let lies, fill my head
But you say it’s like that and the way it is
Well that’s my point! There’s no love to give”

On the plus side Red can be said to be speaking about a serious topic in a straightforward manner. On the minus side Red’s rap style was out of date even in 1988 and seems seriously out of step with the more famous Geto Boys lineup’s rep for street reality. In fact most of the songs on “Making Trouble” aren’t really making that much trouble at all. Don’t be fooled by the parental advisory sticker, these are some very PG-rated thugs. They’re more concerned with their parents not letting them stay out late than how many rivals they’ll shoot or money they’ll loot. Don’t believe me? Well there’s a reason there’s a song on the album called “No Curfew”:

“Fri-day night, you got your sights, set on this girl
That you met last week at Astro World
She said meet her at 11, and don’t be late
The curfew, 12 o’clock, and that’s what you hate
My pops is goin out, moms past her sleep
You know my clock struck 1 and my beeper beeped
So I picked up the phone, and got ready to go
Climbed out the window real slow and low soooo
Listen cause I’m only gonna say it – one time
Mom I’m not comin in that’s final – next line
Keep the motor runnin, moms on my back
It’s like that, to be exact, and that’s a fact – NO CURFEW!
WE DON’T WANT NO CURFEW!”

I didn’t bother to identify who was rapping here simply because the members are trading lines back and forth a la Run and D.M.C., because it takes a lot to fry my brain, and denoting each rapper would be a pain. AGHHHHH! Looking at this album, listening to this album, thinking about this album just makes me want to scream “WHO’S HOUUUUUUUUUUUSE? RUNNNNNNNNN’S HOUUUUUUUSE!” The problem here is that these Geto Boys are a pretty poor substitute for the Queens crew. You can look like Run and D, you can talk like Run and D, you can sound like Run and D but YOU ARE NOT RUN AND D. It’s not surprising that Rap-A-Lot shitcanned half of this group. Bushwick Bill’s survival was largely due to his invisibility ON the album, and that’s not a height joke. You literally do not hear from him except on “The Problem,” an ironically titled skit slash outro to close the album where they don’t realize the REAL problem is this album’s lack of originality.

There are only three reasons I can think of that I have not thrown this album in the trash a long time ago. The first is that for better or worse this album is considered to be part of the official Geto Boys catalogue, which means I need to keep it to have a complete collection. Yes that’s a shitty reason but it’s a reason all the same, so don’t fuck with me. In fact “don’t fuck with me” is the second reason – an excellent instrumental track called “Balls And My Word” which is made up entirely of samples from the movie “Scarface” starring Al Pacino. This song was actually good enough to be recycled multiple times on later Geto Boys albums and is more closely associated with Mr. Brad Jordan than anybody on this kooky LP. The third and final reason is the song “Assassins,” which is the only seriously hardcore track on the entire album. For one brief shining moment these rappers sound like Houston’s hardcore renegades and not Run-D.M.C. rejects, and Prince Johnny C turns in a shining performance that would sadly not be duplicated anywhere else on the album.

“As I walked through 5th Ward, I saw this man
He was kind, but he was blind, I snatched his jewelry and ran
I caught up with Box and said, ‘I think it’s worth a grand’
He smiled and he giggled and he shook my hand
We tried to pawn it in to have some for fare for the jam
He said ‘It’s fake’ and I said ‘What?’ He said ‘I’m sorry’ I said ‘Damn!’
My mama threw me out, I called my sister a whore
Now my house is abandoned, my bed is the floor
It’s been a week I didn’t need, I couldn’t take it no more
Saw my teacher Miss Elaine at the grocery store
I waited by her car, she asked ‘Why aren’t you in school?’
Put my gun up to her head and said ‘Get in, you old fool’
She offered her keys, cried and said ‘Please!’
She promised not to tell and give me A’s and B’s
I said ‘I want your money, grub, and all I can sell’
I looked into her eyes and she was scared as hell
I knew she was a snitch, I beat her down with my gun
Got happy with the trigger, now I’m on the run
An assassin!”

Hardcore, unapologetic, and as raw as the Houston streets that the Rap-A-Lot family called home. If the eleven songs of “Making Trouble” had been like this one track we’d be hailing this album as a hip-hop classic, but instead you’re more likely to find it at the bottom of a 99 cent bargain bin. Leave it there. The songs worth hearing have been recompiled on other Geto Boys albums, and the songs not worth hearing are just Rap-A-Lot unsuccessfully trying to copy a New York style and sound. The reason the Geto Boys were and still are so beloved is because they put Houston, Texas on the map with a frank and unapologetic rap that shocked a nation. This album is a detriment to that history and is best forgotten altogether. It’s porrly produced, ill-conceived and an embarassment to the legacy of the name. History demands we record this album’s existence but it would have been better if the original Ghetto Boys spelling had been left in tact so we could officially consider this album NOT to be a part of the real GB discogrpahy.