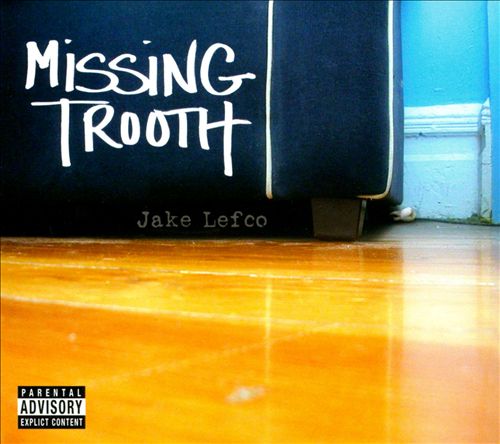 Jake Lefco is a New York-based, Philly-raised MC who has been around for a few years. He released his debut “And You Are?” in 2006, and “Missing Trooth” was supposed to come out some time last year, but is only now seeing the light of day. The title “Missing Trooth” refers to a tooth that got knocked out of Jake’s mouth when he slipped in the shower. The concept of his missing tooth and the missing truth in music is a clear indication of Lefco’s honesty and self-reflection as an MC, and his tendency towards puns as a lyricist.

As is fitting for an MC who uses his government name, Lefco is honest and sincere, rapping about his life and his feelings with a minimum of fronting. He’s not trying to be the hardest cat on the block, and he doesn’t pretend to be involved in life on the streets or to be knee-deep in money and women. The lead single, “Comfort Zone,” examines his struggle with avoiding complacency and pushing himself. “Why get stressed when I can just get stoned?” he asks, being brutally honest about his own tendencies towards laziness. He examines the meaning of life on “What It Is,” offers a tender love song to his girlfriend on “Solis,” and details his struggles with his temper on “Down Deep.” While other rappers invent layers upon layers of characters to hide behind, Lefco strips himself bare, letting the listener into his deepest anxieties, fears, and joys. That’s a risky path for a rapper to take, and Lefco deserves praise for being willing to be real and open himself up.

The most obvious reference point here is Atmosphere’s Slug, another MC who is prone to laying himself bare on wax. “When It Rains” could almost be an Atmosphere B-side. Over a funky guitar sample, Lefco describes a party from the bartender’s perspective, cleaning up puke, dealing with coked up chicks and drunk frat boys, and seeing with clear eyes the ugly side of bar life. Beyond Atmosphere, there are plenty of nods to classic hip hop acts from Eric B. & Rakim to N.W.A, to A Tribe Called Quest. Much of this is done in the production via samples of classic beats, breaks, and verses, expertly chopped up by Panek. The beats are a definite strong point of the album; Happ G produces fourteen of the sixteen tracks, with Snuff handling the other two. They both create solid, head-nodding hip hop that references classic New York rap.

Lefco gets the beats and subject matter right, and he has some decent lines, but he fumbles in the delivery. His flow is often forced and amateurish, and lacks the organic, effortless quality that marks a truly great MC. He is further hampered by some corny lines. “What It Is” offers a successions of puns on the concept of “life isâ€¦” that get painful, even though some are fairly clever. “Life Goes On” is a storytelling rap about ugly lunch ladies, car accidents, and missing teeth that is straight out of Will Smith’s book, circa 1987.

“Missing Trooth” has good production and a very admirable sense of honesty and directness. Lefco’s realness is a welcome break from all of the fictional drug dealers and ballers that populate hip hop. His delivery doesn’t always make good on his promise, but his other qualities make this an album worth your time.