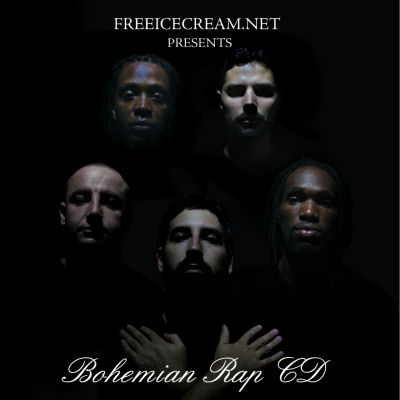 The idea has lingered in the collective consciousness of hip-hop since the unfortunate rise and fall of Vanilla Ice – sample Queen’s greatest hits to make even greater rap songs. It’s really not a bad idea given the long-lasting musical legacy of Freddie Mercury, but Robert Van Winkle poisoned the well and nobody’s wanted to openly advocate drinking from those waters for almost 20 years. Even on the rare occasions Queen samples have snuck into the mix, they’ve been carefully hidden in the background, and were probably prohibitively expensive to license from the corporate owners of that still highly marketable music catalogue to boot.

Kats & Domer have their own solution to the latter. FreeIceCream.net is literally what the domain name implies – great flavors you don’t have to pay for. While that doesn’t necessarily get them off the hook if any of the copyright holders object later on, there’s far less to take them to task for than if they pressed up physical copies of their “Bohemian Rap CD” and sold it in stores. The sense of humor involved in this release is also a good defense, as it’s a tongue-in-cheek tribute to Queen as evidenced by the cover art and how the title of the album parodies Queen’s most famous single of all time. For rap listeners of my generation it’s not hard at all to picture Wayne and Garth cruising Aurora, Illinois with a copy of this album playing in the tape deck.

That’s all well and good, but the question still stands – did the producers of “Bohemian Rap CD” succeed in their Queen tribute or was the real joke on those who downloaded the album? Well I’ve got some good news – the rap skills that are displayed on the album are no joke at all. The Bohemians found on this CD are an underground hip-hop quintet consisting of illspokinn, Domer, Jake Lefco, Ryan-O’Neil and Kats. Individually they’ve each achieved some recognition both on and off RapReviews, but together they are an awesome force who use the old Wu-Tang Clan formula of each stealing the spotlight on their own verse before passing off to the next crew member. “So You Think You Can Spit” illustrates this perfectly:

Kats: “Posse’d up, you pussies are fucked now
You know Tombstone? Well this is Bucktown!
It’s bugged out how we got it on lockdown
Some of the best around, runnin amuck now”

Jake Lefco: “Someway somehow you think you’re the shit
Think you can spit when you swallow the dick
Get better as time ticks I’m not gonna quit
More likely to catch Michael Vick with a pit”

Ryan-O’Neil: “So you spittin? (Wow) I thought they said it wasn’t hip for now
Look at how the whole world is gettin down
+I Get Around+… like ‘Pac
Get another line, yo my rhymes don’t stop”

Domer: “Thinkin you can spit? Nope, not even a little bit
Little shit, you can’t write like an illiterate
I’ve seen you try to rhyme, but every line of mine
is ten times better than your best nine combined”

Each verse of the song is punctuated by a sample of Freddie Mercury wailing “OHHHHHHHH BABY” and the disdainful remarks of the collective about other rappers – including my favorite “Sorry, your style ain’t hot – I ain’t a hater, I critique a lot” – followed by a clever chop of the Queen line “So you think you can stone me and spit in my eye” which obviously takes out the “stone me” and “in my eye” parts. That clever playfulness with the Queen samples is what makes this short “Bohemian Rap CD” work. Even when you can guess the sample, the way it’s worked into the song is unexpectedly fresh. “Little High, Little Low” chops the phrase into punctuation of each line of the chorus, while vocals of Queen harmonizing are ground up and sprinkled like peppercorns onto hot bars. “Mama Mia” becomes an ode to a hottie that the brood pine over, but guitar licks from the “Bohemian Rhapsody” work their way into the mix too. Even “Little Man” manages to be more than expected, filtering Queen through a NyQuil induced haze into a largely original and banging beat.

So what’s the bottom line on the “Bohemian Rap CD?” Well first it’s hard to find much fault with any of the rappers here, but that is owed in part to the fact each gets to shine for a short amount of time before passing the mic, meaning even if any of them are weak they’re not on for so long that we discover those weaknesses. I honestly don’t think they have that many anyway, but Ryan-O’Neil and Lefco are my immediate favorites while Domer’s gruff delivery makes him a musical standout. More to the point though the “Bohemian Rap CD” is TOTALLY FREE, which is always a good argument for liking an album, especially when it’s based on a dope concept and done in an intelligent way that’s highly enjoyable to listen to. I recommend you download this one too and put it on your iTunes playlist.