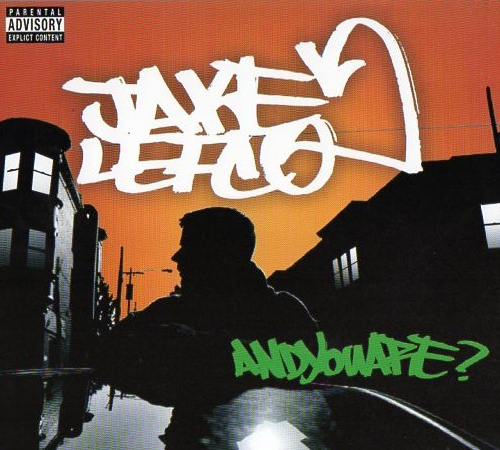 Jake Lefco is a promising new voice, one that isn’t afraid to be himself. His brand of self-confidence is a mix of tongue-in-cheek swagger and a mature awareness of what surrounds him. In a world where identity crises abound, Lefco is secure enough with his spot to ask his audience and to name his first opus “And You Are?” This prevailing theme gets beaten almost to the point of death over the course of the album, but it’s still a stable platform for a debut artist to make a unique splash in the game.

Jake comes correct with the title track, a joint that sounds like something straight out of the Souls Of Mischief’s classic “93 til’ Infinity.” The syncopated kick and snare with the string bass line give the song an old-school feel, and Lefco makes his mark immediately. Wasting no time, he targets other emcees with fake thug images and also presents himself as an able lyricist, weaving through the track with ease.

“I’m ill I’m a peaceful man though
Too many rappers out now swearing they Rambo
Call me soft but I don’t really get it
Negativity can get to me but I don’t really let it
Guess I’m way too busy getting it on
They can use it for the black, white, rich and the poor
It is what it is
I do this for the kids
For your boy who didn’t make it
For your cousins doin’ bids”

Unfortunately, this song is followed by the voices of random people introducing themselves as Jake Lefco, which becomes the format of every skit on the album. While some of their introductions can be funny, for the most part they’re a hindrance on the record’s overall listening experience. They often trail each song and carry the track time out to an extra minute, which disturbs the album’s flow.

Lefco completely lets down his guard on “Be A Man” and exposes his beliefs as an artist and as a human being. The upstart emcee proves that he’s wise beyond his years as he spits about being a positive influence to young listeners, as well as admitting that he waits tables for a living. Rapping about subject matter like this takes a lot of humility for any emcee, let alone someone trying to create a buzz for himself. By going against the grain, however, Lefco’s album becomes everything backpackers love, but he still retains sensibilities that should keep him accessible to the general audience.

A track that exemplifies this is “Wonder Years,” which wraps up Lefco’s life via a year-by-year account that shows that he’s more than just an underground rhyme machine. The album’s instrumental value reaches its plateau here, as a vintage classic rock riff and organ loops create a sound straight out of the 60’s. An account of each year is accompanied by a humorous ad-lib, which makes him sound a lot like Eminem, who’s famous for capping off his verses in the same fashion. Nevertheless, the comparison stops there, besides the obvious fact that both emcees are white. Lefco doesn’t rely on shock value the way that Em does, but he also doesn’t possess the same fire-breathing tenacity a young Marshall exhibited during his earlier works. The Philly-based rapper instead tries to relate to listeners as much as possible, and it’s his humble grind that makes him so appealing.

This record also features concept songs like “Rush Hour,” where an exasperated Jake finds himself late for work once more after a battle with the snooze button, as well as the college-radio hit “Headphones,” an ode to the females that comes form a slightly different angle (Women, you can’t live with them/ you can’t hit ’em/ You can’t kill ’em/ Thank God for headphones). The aforementioned songs display Lefco’s boy-next-door charm and sense of humor, which are both strengths that should help carry his career into the future.

For all of the positive things that can be said about his debut, Lefco still finds himself in a few songs that constrict his verbal skills and unique point-of-view. “Get Pleasant” is a pointless song dedicated to partying and getting high, which unfortunately has become a staple in almost every album nowadays. Songs like these hardly conjure any emotional high, no pun intended. Only a sure-fire beat can salvage said tracks, with an example being Lloyd Banks’ “I Get High,” which featured the legendary Hi-Tek as the savior on the boards.

“Nasty N’ Nice,” meanwhile, sees Jake awkwardly trying to prove his ghetto pass, and he sounds like a sub par emcee when doing so. The carefree punchlines disappear for only a few bars, however, as Lefco quickly recovers and brings this track back to respectability. This song is a perfect example of how sporadically gifted this guy is; when he wants to bring the goods, he usually delivers. How often he does so over the course of his career is a question yet to be answered.

Jake Lefco has one thing going for him in the midst of this cutthroat music business, and it’s the fact that he knows who he is. He knows what message he wants to deliver, and on this album he does so amongst quality guest emcees (Reef The Lost Cauze and Scandal), and also on his own. He has a few cadence issues, which prevents his performances from being breathtaking. His voice isn’t captivating enough to make up for his said faults, but he still has the skills, regardless. A few more years of polishing, and the world could be in for a new warrior who will carry his torch in the recesses of the underground.

Jake Lefco :: And You Are?
7.5Overall Score
Music8
Lyrics7