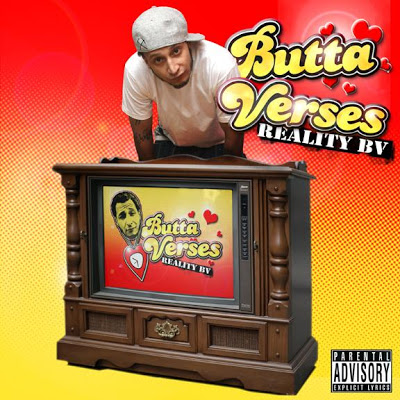 If you’ve heard either of De La Soul’s last two albums, “The Grind Date” and “The Impossible…,” you’ve heard Butta Verses spit. If you haven’t heard them (a shame, considering the former is a modern day classic), BV probably doesn’t ring any bells. Despite being signed to DJ Maseo’s Bear Mountain Entertainment for three years, Butta Verses is just now seeing his first album released, via Culture Kings/Domination Recordings.

The first portion of “Reality BV” seems determined to assure fans that, while currently residing in Fort Lauderdale, Butta Verses is still very much a Bronx MC. Kurious (Jorge) and A-Butta, two of the more talented figures in the New York underground scene in the ’90s, join BV on “It’s Them” and “Speech Therapy.” Both guest rappers sound more or less like shells of their former selves, but the latter is nonetheless a banger. A-Butta and Butta Verses (no relation) offer vintage NYC flows while producer Tzarizm’s hiccupping keyboard adds the necessary adrenaline. Brooklyn’s finest unsigned hype Joell Ortiz jumps on the intentionally old school “Rock Mics,” which samples “Microphone Fiend” in between verses. Both rappers honor Rakim’s masterpiece with their verses, but Joell is the clear standout:

“First things first, ya’ll not fuckin’ with me
I’m so far from a sucka emcee
From off stage I spot a bitch that’ll suck a emcee
Finish the show and grab that hoe like ‘you comin’ wit me’
..Where I’m from, we don’t pay off them crooked cops
We throw shots, really turn ’em into crooked cops
We pioneer back blocks with crack rocks stashed in that sock
Not that sock, that sock’s cash I snatch wop, rap hot..”

“Reality BV’s” glaring mistake is its abandonment of these show and prove style tracks. BV’s plunge into the more laid-back, introspective songs begins strongly with “Change the World,” rapping “I put my ALL in ALL my work // my life, my joy, my struggle, my hurt // make you buy my CDs and buy my shirts // when I die you’ll be there, you’ll be cryin’ in the dirt!” However, the second half of the record is plagued with boring beats and forgettable flows. Butta seems out of his element on “Cassanova Brown” and especially “Amazing Grace,” lacking the vocal energy to intrigue with a slow flow [see: Jadakiss]. A guest verse from CL Smooth helps salvage the otherwise unremarkable “War of the Roses,” but the record stalls for a good time until “Ask For It” returns BV to his habitat. Mike Beats’ production gradually increases its pace before becoming down right eclectic by the second verse. Butta takes advantage of the powerful beat with battle rhymes and clever alliteration: “Bold boys braggin’ how they better at battling // Yeah, maybe if we was breakin’ and back spinning, not rap spittin’ // Bust it when the boom bap hits I’m in a bitch like Botox is, I know my shit.”

As disappointed as I was in the number of lazy attempts at introspection and obvious subject matter, the best song on the album is doubtlessly “If I Die,” which is as deep as “Reality BV” reaches. Smartly being pushed as the lead single, Lucian nails the hook and Butta demonstrates what he can do with the right production and theme:

“If I perish without hittin’ the top like climbin’ Everest
By every chick I slept with, I’d never be missed
I did ’em wrong, then I put they business in a song
Stole from ’em, told ’em how no dude would want ’em
..I’m ashamed of the way I played the game of love
And my man’s wettin’ sitting at the church just sweatin’
Lookin’ around, swearin’ I’ma get struck down
Knowin’ that I left every love I found
My mom’s wasn’t around, she dropped me like a shipment
Maybe that’s why I got a fear of commitment
Maybe that’s an excuse, probably a lame one
My father used the noose, wonder should I use the same one?”