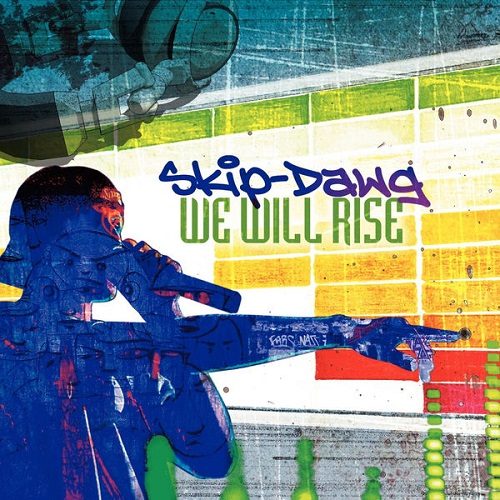 Reading Skip-Dawg’s press release will cause you to lean back and ask yourself, “What have I done with my life?” I have my fair share of personal achievements; however, they are simply nightlights when compared to the illuminations that represent his accomplishments. Let me spell it out for you: this guy is an Olympic-caliber swimmer, Ivy League graduate, professional actor, survivor of a near-fatal genetic lung disease, and for the purposes of this review, an emcee with SEVERAL albums under his belt.

This album was recorded after the last of the several surgeries it took to save his life, and after he had been told that he would never rhyme again. After a lengthy and quite painful rehabilitation – described in detail throughout this album – it becomes clear that NOTHING except death itself was going to keep Skip-Dawg from his true occupation as mic controller. The chief theme throughout this album is Skip-Dawg’s recovery and reclamation of his true passion: emceeing. For the most part, it plays like a tribute to overcoming long odds and a celebration for when those obstacles are overcome. There is a very triumphant, uplifting, and high-energy feel throughout this entire album.

The press release makes note that Skip-Dawg is renowned for his live shows and the music on this album bears that sentiment out. I can HEAR most of this material being performed live – and to great effect. “Make a Miracle Happen” is just as much a tribute to the power of love, and having people who are REALLY in your corner, as it is a narrative of his struggle with his lungs. The rapper Sassy – who if she is not his girlfriend, he needs to make her that – tells her story right alongside Skip in describing her personal efforts to keep his head up when he felt his lowest. Skip returns the favor by delivering on his promise not to give up, and making sure that Sassy knows how he feels about her.

“We Will Rise” continues the celebratory vibe, and introduces a track that sounds like it would be right home if it was dubbed in to a Rocky flick. I can hear this one coming out of the loudspeakers at a sporting event, and if someone is smart, they will be LICENSING this one because it is most certainly an energizing selection. “Never Knew” continues the same vibe as “Make A Miracle Happen”, expanding on Skip’s troubled moments and letting us know how grateful he is that his loved ones never gave up on him.

I have never heard Skip-Dawg before this album. He is a solid writer, with an interesting delivery that I suspect was a hint better before the decline of his health. He has managed to create an album that I personally use for my workouts. The inspirational tone (minus preachiness), the general message to live life while you have it, the genuine love for his peoples, and the sporting event-styled production. True enough; the single-minded approach taken on this album does tend to wear a bit thin towards the end. It also could benefit a bit from having a few more producers. However, this album is a good choice for when you have an obstacle to overcome: be it the gym, or something a bit more crucial.