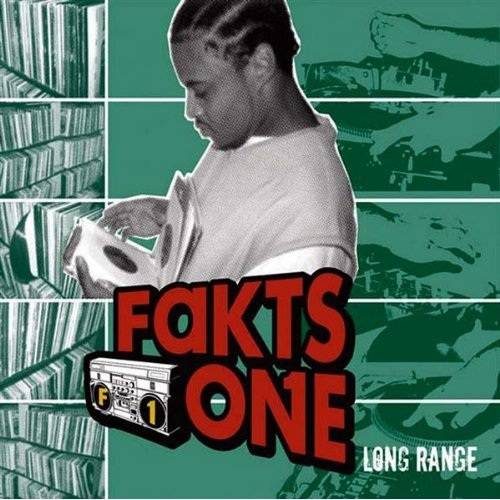 The news on the underground beat for a while now has been that legendary Bostonian and Perceptionists member DJ Fakts One had retired, or, to be more precise, had simply disappeared. Fresh off the success of the Perceptionists album “Black Dialogue” and anxiously awaiting the release of his solo debut, Fakts departed into the night amidst record label drama, appearing to be another in a long line of artists whose careers were forestalled or ended by industry machinations. Miraculously, his debut set has finally been released to the masses, purportedly in its original form after all these years, making “Long Range” an exercise in nostalgia in addition to a solid producer album with a potent line-up of MCs.

Fakts’ beatmaking prowess has never been in doubt, and he comes through as expected on “Long Range.” The instrumental opener “Ridin’ Dirty” features some nice scratching, but the echoing bass and sparse drums do little to prepare you for the deft combination of percussion, bass, vocals, and all manner of dope samples served up the rest of the album. Fakts doesn’t overload his beats with too many elements, layering sample over sample to awe you with sheer volume. Instead, he picks and chooses his moments, hitting you with a horn stab or a vocal croon at just the right moment. The first full-fledged song, “Grown Folks” featuring Little Brother, illustrates his style with its start-and-stop drums, brief vocal sample, and a two note guitar riff that interlock to perfection, kind of like a 9th Wonder loop trimmed of its fat. The reggae bassline of “Life Music” featuring Rocklyn and Maya Azucena lays the foundation for a bouncy mix of guitar strums and upbeat drums, with Azucena’s singing melding with the beat and adding an additional layer of sound. Later on the album, he experiments with strings, chopping them faster or slower for different levels of cinematic tension. The result is a frenetic feel for “Selfish” featuring Akrobatik and Iyadonna enumerating their many relationship troubles, and the more wistful tone of “Longevity” featuring Planet Asia, Rasco, and Shakes Da Mayor, which sounds a little like another Planet Asia collaboration, Evidence’s “A Moment In Time.” Regardless, the confluence of well-placed musical components elevates these beats to the elite level you probably already expected to hear on a Fakts One album.

All the usual suspects show up to bless the mic, with Fakts’ longtime cronies providing most of the best tracks. Akrobatik and Mr. Lif combine on the Perceptionists reunion “The Showstarter” over a drone of tense strings and virulent, almost dissonant horns. The Little Brother offering, “Grown Folks,” is a stunning union of beats and rhymes on a higher level. Big Pooh delivers one of his freshest performances in a while despite sounding like he had a head cold that day, but Phonte once again upstages him with a scene-stealing verse that sets off the album proper:

“Been known to pop the oculars of MCs that’s eyein’ mine
Tay chillin’ in the cut like iodine, have you cryin’ blind
Hip hop was half dead, we try to revitalize
My big Rube style, y’all Americans idolize
And Simon says shut the fuck up when you try to rhyme
This rap shit is more than what I do with idle time
When I was young had a vision
That one day I would move the crowd ill like a bad magician
Hooked with Pooh and 9th and got on a battle mission
And now we on point like statisticians
Let the whole world have a listen
Rollin’ across country in a van with the windows tinted
With no alcohol, blow, or no indo in it
Ten years and y’all fuckers still tryna get your demo finished?
Damn shame y’all done been so timid
A House Party, and ‘I’m gonna get those digits!'”

J-Live’s solo track “Audiovisual” demonstrates his continued ability to make any and everyone else look like a rookie on the mic. His heavily nuanced, metaphor filled verses and hook outshine damn near everything else on the album, and Fakts One’s muted Spanish guitars will get your head bobbing while keeping the focus where it belongs â€“ J himself.

A few of the lesser known guests fail to hold up their end of the bargain, and although no one really tanks it, the mediocre efforts bring down the quality of the album a bit. “Born For This” boasts a stellar beat of vibraphones and whistling sound effects, but Chan’s tongue in cheek narrative of his birth and early years comes off like a rap-by-numbers affair, especially with the weak similes strewn about (“I serve competition like Peter Sampras / Leave your lame CD shit-stained like Pampers”). Universal doesn’t impress either on “U From The Q,” and Tajai suffers from the album’s only real musical low point on “Moments Matter.”

Fortunately, the abundance of strong material easily outweighs these few weak moments. Along the way, the Boot Camp Clik, Grayskul, and King Syze and Outerspace of Army of the Pharaohs fame drop by to lend their vocal talents, all with great success. As with so many producer albums, it’s hard to maintain a consistent tone over fourteen tracks and with around twenty rappers in tow, and Fakts One’s project is no exception. In this case, though, the variety actually works to the album’s benefit, and there is a clear consistency of quality across the board that makes “Long Range” well worth a look back. If it does well, maybe we’ll be lucky enough to get Fakts back in the studio. Here’s hoping.