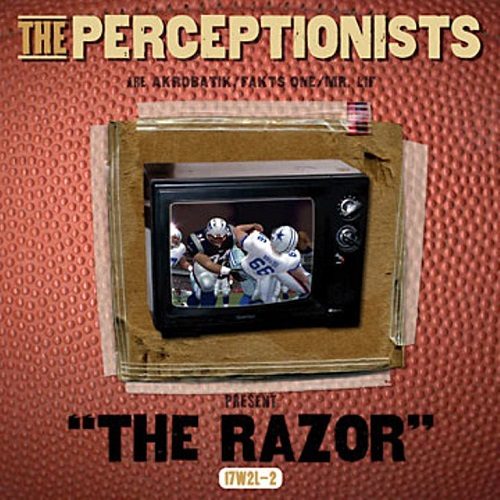 The Perceptionists :: The Razor

When it comes to big names in Boston’s hip-hop scene, they don’t come much larger than Akrobatik, Fakts One or Mr. Lif. The former and latter are regarded as among the best MC’s in underground rap, while the man in the middle is the DJ and beat maestro who has worked magic for both and many more hot rappers in hip-hop. If you had to create a Boston supergroup to wreck the world, it would be hard to come up with a better trio. And guess what? There’s no reason to try now, because they’ve already done it. Taking the name The Perceptionists, the group’s moniker implies that they have a keen eyesight for seeing what’s dope AND that their cognitive abilities are beyond compare. With 50 minutes and 29 tracks, The Perceptionists have the chance to prove it with a mixtape CD called “The Razor,” which one would assume must be equally sharp in it’s cuts and rhymes.

With so many tracks crammed into such a short span, the album feels more like a Perceptionists sampler. Things start out nicely on the intro though, as Akro and Lif give their shout outs to the New England Patriots. Personally I’d have been happier if it was dedicated to the Red Sox (and I’ve heard Akro freestyle about them before), but you take what you can get. The next three songs are Fakts One showing off his skills on the wheels and interludes to kill time until the P’s reunite on “Funky 4U.” As one would probably guess from the title, the rappers do indeed flow over the old school Nice & Smooth beat, and in some ways remake it:

Lif: “Smooth Lif notorious, glorious
Knowledge is infinite, I live in a fortress
I’m so astronomical, and I’ll be bombin you
Rip off your fuckin face, maybe eat an arm or two”
Akro: “Takin them shits, throw ’em in the blender
I’m the real thing, not like a pretender
Stay real strong and hang on like that Crazy Glue
Then eat a plate or two, chill with my baby boo”

I’m not sure if Akro is the right guy to imitate Greg Nice (he’s a little too lyrical to be in the same category) but Mr. Lif’s version of Smooth B is dead on. This is followed up by Mr. Lif flipping verbals on the “New Man Theme” remix, and the P’s reuniting again for a “WreckDem” remix. The action is briefly interrupted by a comical radio DJ interview allegedly with Lil Jon, and then dips into a Perceptionists song called “Avengers.” The verbals are okay, but the beat is a bit underwhelming. After another interlude, Akrobatik comes back to get ill on “Livin in the City”:

“If you ask me, the cats who run this country are fuckers
Ignore the smugglers, but lockin shorties up for dime bags
The mayor bless the city and the freedom that he callin
But you can blaze legally in cities in Holland
That’s why we fallin, cause every freedom we get, they take ’em
Sometimes I think they only make laws so they can break ’em
Cops runnin red lights just to get some donuts
We hustlin to eat, the government’s like – so what?”

Say word. This is blended into “2Chill” and followed up by a Rudy Poo interlude and Mr. Lif freestyle. It’s important to note if you cop this disc that the track listing goes off by one thanks to the “2Chill” blend, as Mr. Lif’s freestyle is actually 14 and not 13. Also I understand they were psyched about the Patriots being champions when they recorded this disc, but putting a pigskin on the back cover and then putting the tracklisting in black over that brown background makes it VERY hard to read. Negative props on whoever put this packaging together. From here the album hits it’s stride with back to back hits of the straight dope: a Perceptionists “Showstarter” remix, Akrobatik’s “Militant Raw,” Mr. Lif’s “Heavy Artillery,” and after a brief freestyle come back with the heavily conceptual “Medical Aid” where the P’s cut up MC’s like surgery:

Lif: “You don’t need that Adam’s apple bruh, throat slash
Dope gash, perform for no cash, blood supplies won’t last
Don’t pass go, asshole
Try to run away get your back slashes slow
(Paging Dr. Lazlow) alias Lif the fly surgeon
(Are you certified for this procedure?) Nope, I’m just learnin
You can stand and fight but it might be better
to just slice your chest like Willie in +Predator+”

Brutally beautiful. The album’s final third wraps up with more freestyles and live performances offset with songs like Akrobatik’s “Home” and Perceptionists “The Fat Shit” parts one and two, re-sync’ing the tracklisting and ending up with “A Word From Our President” and the Akrobatik track “Holla Ak.” On the whole it’s a good mix, and it’s some of the most impressive work I’ve heard from Mr. Lif to date, but doesn’t quite capture the Perceptonists vibe as strongly as they’d want. Having a group with such unlimited potential should have resulted in a mind-blowing mixtape from start to finish, but “The Razor” actually has some slow moments and some beats that are only mediocre in head-nodding as opposed to being certified bangers. Thee’s no question their “Block Dialogue” album next year will be fire, but for now this album only serves to warm things up a little bit.