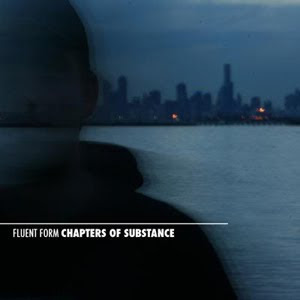 Fluent Form may be from Melbourne, Australia, but he is clearly in a New York state of mind. His commitment to lyricism and the dark, cinematic beats he raps over pay homage to classic East Coast hip hop. He makes the type of hip hop that usually gets the prefix “real,” as in true to its roots, and free of the glitz and artifice of mainstream rap. There are no autotuners, vocoders, or R&B singers on “Chapters of Substance;” just ten tracks of hard beats and hard rhymes.

Fluent Form gets production help from Doc Savage, Mizari, Geko, Ciecmate, Must, Trem, and Methodz. All the producers do sparse, brooding beats that are a little RZA, a little Primo, and sound way more Staten Island than Down Under. I have a hard time understanding how people from such a warm, sunny continent could make music so dark and cold. Whatever their motivation, they do it well, once again proving that Australian producers can hold their own on the boards. The tracks all sound good, although the somber mood of the album gets claustrophobic and a little monotonous by the end.

There is a punk element to Fluent Form’s half-shouted lyrics, and in the general mood of the disc. If he had been born a generation earlier, he probably would have picked up a guitar rather than a mic. He’s not doing anything near Limp Bizkit territory, but he does bring some of the honest anger and frustration found in great punk to hip hop. Like most Aussie rappers, Fluent Form doesn’t try to bite the subject matter of American rappers, and steers clear of tales of street crime. Instead, he offers a localized version of hip hop that sounds authentic and real.

American listeners might have an issue with Fluent Forms thick Aussie accent: it is impenatrable at times, which makes his lyrics difficult to understand. He’s like fellow Aussie MC Clandestine in that regard, and both share a similar aggressive flow that is difficult to follow. One thing you definitely won’t hear is any cursing; Fluent Form keeps it clean on all ten tracks without sacrificing any intensity. Without the standard curse words to fall back on, Fluent is forced to use language to get his point across, which makes him a stronger MC, and makes the album more interesting.

“Chapters of Substance” is a strong debut by an MC doing his best to keep hip hop real. Fans of classic East Coast rap should check this out, as well as fans of Aussie hip hop. Fluent Form is proof that Australians can rap, and that it isn’t all sunshine and surf in the land Down Under.