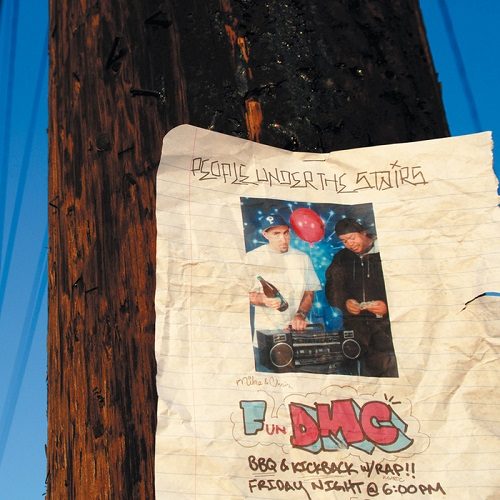 People Under The Stairs :: Fun DMC

I have a confession – this is the first PUTS album I’ve ever heard. Risking all my credibility on the subject of underground rap, I have to admit that for years I ignored all the buzz about “The P.” Mostly due to lack of time, the duo of Thes One and Double K never became a priority. I’d heard all the comparisons to Jurassic 5 and Dilated Peoples, but frankly those two groups never quite lived up to their own hype. I wasn’t too enthusiastic to peep the junior version of those one time underground heroes. In 2008 I have finally run out of excuses to sleep on PUTS and it couldn’t have come at a better time. I’m a sucker for wordplay, no matter how corny it may be, so calling your album “Fun DMC” is likely to get my attention. I must also admit I’m intrigued by the idea of the CD. Apparently the duo had become too serious with their music and tried too hard on “Stepfather,” leading to a lukewarm reception. With “Fun DMC” the group looks to return to their playful roots. Considering I never viewed PUTS as a serious group in the sense I didn’t expect reality rap or strong social narratives, I’m interested in how two self professed b-boys infuse even more “fun” into their music.

For those as unfamiliar with PUTS as I am, PUTS is basically the west coast version of Little Brother – meaning they’re a new school act with a throw-back mentality. The music is funky and soulful – golden-era inspired beats – and lyrically the group is rapping about rapping. In a way the West and East Coast play polar opposites when it comes to rap subject matter. While New York was into the more playful and positive elements of hip-hop, the West Coast exploded with gangsta rap. Now that the west coast has seen the development of a strong underground rap scene, it seems most New York rappers are worried about how street they are. PUTS capture the laid back vibe well both with their music and lyrics. To their credit, the music maintains a very consistent and pleasant vibe throughout. “Another’ (BBQ)” is meant to be a lead single, but lacks the pop of a true lead single. “The Wiz” on the other hand is much closer to lead single material with its funky bass line, playful piano, and catchy hook. “People Riddim” also stands out, not necessarily because the reggae riddim used is original, but because it provides a change of pace from the more laid back tracks. Overall, the duo cooks up a pleasing mixture of funky production with enough variety to keep things interesting.

Lyrically, the fear might be that PUTS would keep it too fun or simple on this CD, but they explore a wide variety of subjects. “D” is a heartfelt reflection on life and sad memories:

“In the corners of my mind
Memories filed away with no regard to time
And every once in a while they fall
And I can smell the paint on the junior high wall
The night KJLH Djed the dance
My white cardigan and grey pants
We did the damn running man
My mind’s taking me back again
It’s got me drifting while I drive
It’s been about three years since you were alive
But you know your number is still in my cell phone, you know?
I just had a son you’ll never get to see grow
Shit, conversations with the deceased
The night the “Next Step” was released
We talked and I walked to the store
Got a drink, got drunk alone and cried, scared of what y’all would think
Damn! This is all I ever wanted
It’s hard moving forward when life keeps you haunted
Like Metroid blue lights, late at night Nintendo
Half a sleep, back seat, lights through the window
Living in limbo, somewhere between
Right now and yesterday feels like a bad dream
The mundane memories are random and vivid
My life’s hard to believe, I lived it”

“A Baby” deals with the questions and insecurities that come up for every new father when first faced with the idea of bringing a life into the world. None of the serious songs come off as forced or awkward and those songs are balanced by plenty of old fashioned hip-hop. “California” is an anthem dedicated to Thes One and Double K’s home state. “Critical Condition” and “Letter 2 The Bronx” are nothing more than songs dedicated to the art form. “The Swan Fever” is a sweet mixture of trash talk and expression of PUTS’ love for the music.

Not being familiar with PUTS beforehand I can’t tell you whether or not they got too serious the last time around. I am familiar with the concept, though. Thinking too much about something can not only detract from its appeal, it can also lead to an inferior product. Athletes who have to think about what they do are easily eclipsed by athletes who don’t have to think at all. Even the best athletes lose sight of this concept at times. They over think free throws, think about running before catching the pass, and concentrate so hard on pitch placement they throw the ball into the dirt. With “Fun DMC” it seems PUTS have learned their lesson and let it come naturally. Surely the process for Thes One and Double K was much more “fun” this time around. The product on the other hand was perfectly balanced between “fun” music and music that reflects the seriousness that is life. Overall, PUTS impressed me with “Fun DMC” so I can only assume others unfamiliar with the duo would be equally impressed. Stretching that logic even further, I can’t see why old fans would be disappointed as “Fun DMC” is chock full of good music, a “fun” vibe, and love for the culture.