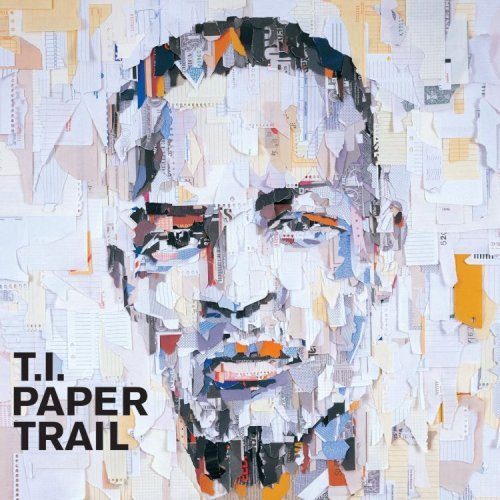 The hype leading into Clifford Harris’ highly-anticipated “Paper Trail” has been hard to avoid. It’s hard to say for certain if it’s been overkill. On the one hand releasing SIX singles before your full-length album even hits stores is a potential album killer. It’s hard to imagine fans who have already downloaded the best songs a la carte from “Paper Trail” suddenly wanting to reinvest and pay $15 to own them all again. On the other hand any album strong enough to have six singles before it even hits brick ‘n mortar retail is probably going to be a certifiable banger start to finish. Fans who only bought one or two of these songs would definitely want to have the rest, especially since T.I. is one of the most popular rap artists to come out of Atlanta in the 21st century. Even those who had bought more could probably be persuaded to have a “hard copy” of all of the songs from one of their favorite MC’s. It seems either way the risk of overexposure was one that both Alantic Records and T.I. were willing to take, with each single building up anticipation for “Paper Trail” as it simultaneously risked reaching the tipping point beyond which the album could flop.

Before addressing whether or not the risk paid off, let’s address the singles individually. Things started off really hot all the way back in May of this year with the Danja produced “No Matter What.” Besides having a hypnotic church-like musical backdrop and some crunk-ass melody, the opening verse was one of the most honest and raw of T.I.’s entire career, addressing his personal and legal problems and his supreme desire to overcome all obstacles in his way.

“Hey, hey never have you seen in your lifetime
A more divine Southern rapper with a swag like mine
Facin all kinda time, but smile like I’m fine
Brag with such passion and shine without tryin
Believe me, pain’s a small thang to a giant
I was born without a dime, out the gutter I climbed
Spoke my mind and didn’t stutter one time
Ali said even the greatest gotta suffer sometimes
So I huff and puff rhymes, lyrics so sick wit it
Set the standard in Atlanta how to get get get it
So you up and coming rappers wanna diss, just kill it
I’m officially the realest (yeah) point blank, period
Whether I still live in the hood or just visit
Whatever you can do in the hood, I done did it
That why the dope boys and the misfits feel it
This still the city long as TIP livin, nigga”

The emphatic chorus defines T.I. as well as he ever has in his entire career, with the stark declaration “I ain’t dead, I ain’t done; I ain’t scared, I ain’t run/But still I stand… no matter what pimpin’ here I am.” From there the releases from “Paper Trail” continued to escalate in both dopeness and impact. The Jim Jonsin produced “Whatever You Like” blazed up radio with T.I. busting out the Bankhead version of Nelly or Flo Rida, giving his rap a musical flow that matched perfectly with the song’s smooth electronic bounce. For those looking for something a little harder, “Swing Ya Rag” featuring (and produced by) Swizz Beatz put over T.I. as one of the hardest ballers with the biggest bankroll in all of the South. It’s perhaps ironic that a sound with so much club appeal would feature a chorus stating “I don’t dance, no way/I just take my Louis rag out and wave it ’round in the air” but so be it.

Three hot singles right off the bat, that’s certainly not unprecedented for an upcoming album – everyone from the aforementioned Nelly to Jay-Z has done that before. What was really surprising about “Paper Trail” was when three more dropped IN THE SPAN OF TEN DAYS. From September 2nd through September 10th the internet kept blowing up, starting with “What Up, What’s Haapnin'” and followed four days later by “Swagga Like Us” until eventually finishing with “Live Your Life.” Arguably each song serves a different and valuable purpose for Atlantic and T.I. “What Up, What’s Haapnin'” is a Drumma Boy production at a time when DB is one of the most ON FIREproducers in all of rap, cranking out hits like “Put On” for Young Jeezy and “Umma Do Me” for Rocko time after time. The song doesn’t deviate from that formula and is ear-pleasing as a result, but “Swagga Like Us” may be one of the MOST unusual singles that ANY hip-hop artist has put out since Jeru the Damaja’s “Come Clean.” Kanye West went all the way beyond traditional rap into a mind-bending, noisy, warbling and exaggerated electronic melody, stitched together in the chorus by a sample taken from M.I.A.’s hit song “Paper Planes.” Not only did the song go experimental, the guest rap roster from Kanye to Jay-Z to Lil Wayne were adjusting their braggadocious vocals with AutoTune even when NOT singing. The whole presentation could have been overwhelming but T.I.’s down to earth final verse not only grounds the song but steals the show in flow:

“Ay, you can go see Weezy for the wordplay, Jeezy for the bird play
Kanyeezy for diversity and me for controversy
I’m a verse that’s picture perfect, only spit to serve a purpose
You ain’t livin what you kickin then you worthless!
Lookin from the surface it may seem like I got reason to be nervous
Then observe my work to see if my adversity was worth it
Verse is autobiographical, absolutely classical
Last thing I’m worried ’bout is what another rapper do
Ain’t nobody hot as me; even if they rap they ass off
blast off and have outstandin qualities
Sell a lot of records, I’ll respect it and salute that
But spin real life on hot beats, I’m the truth at
You kick it like me, no exaggeration necessary
Livin revolutionary, nuttin less than legendary
Gangsta shit hereditary, got it from my dad
Flow colder than February with extraordinary swag!”

When the story of the year 2008 in rap is written, regardless of how “Paper Trail” does in sales, the song “Swagga Like Us” will go down as one of the year’s most memorable tracks. In fact to be perfectly honest about it, following up with “Live Your Life” featuring Rihanna was unnecessary. The first problem with the track is the choice of sample – jacking from the infamous “Numa Numa” fad that dominated YouTube for far too long (the “Dragostea din tei” song by O-Zone). To be honest I don’t feel that Just Blaze flipped it up enough to make it worth hearing the ten-thousandth time, and hearing Rihanna try to sing new words in the same melody and tempo as this insipid track makes it even worse. I thought three singles was more than plenty, five was really pushing it, but “Live Your Life” was a song that I absolutely wouldn’t have dropped to promote a hardcore hip-hop star. Perhaps T.I. is trying to prove he has a sense of humor and that he’s not afraid to be compared to Gary Brolsma, but this song is so irritating it shouldn’t have even been put on “Paper Trail” at all.

Fortunately for listeners this is the only serious mistake on the otherwise oustanding “Paper Trail,” and having six singles off the album doesn’t turn out to be overkill after all. T.I. wastes no time spitting “56 Bars” right from the album’s beginning, giving all of his fans exactly what they were waiting for with no filler or BS, proclaiming himself “without the braids the closest thing to O-Dog.” It’s followed closely by the Chuck Diesel banger “I’m Illy” with some of T.I.’s most braggadocious lyrics to date:

“How could a nigga think that he could see me
Other than the magazine covers or the TV
Know I sold mo’ mixtapes than your CD
You’re waitin on your big break, prayin you can be me!”

It’s that sense of confidence and “extraordinary swag” that carries T.I. through all the trials and tribulations of his life, including beefs with multiple Southern artists and a rap sheet with as many criminal hits as he has chart hits. With his slick talking and often surprisingly introspective flow (noting on “Ready for Whatever” that “even though my head in the clouds, I’m planted on the pavement”) T.I.’s ability to flip it fast or slow and maintain clear diction on his flow even with a distinctive Georgia accent sets him far apart from his contemporaries. In other words, T.I. is just as much of a star as he thinks he is, and when you believe in yourself and have great ability you can achieve great things. You can hear him reaching for the stars and grabbing hold even on songs that HAVEN’T been released as singles, songs which EASILY would have been better choices than “Live Your Life.” Trench Werk’s “On Top of the World” featuring Ludacris and B.o.B. is just one. “My Life Your Entertainment” with R&B crooner Usher is another. It would be more than fair to say “Live Your Life” is the only really offensive song on the whole album, and it may be that people who aren’t familiar with “Numa Numa” may find it far less annoying than this critic does. It’s actually fairly ballsy that they would release an experimental song such as “Swagga Like Us” as a single compared to surefire choices like “Slide Show” with John Legend and the album’s finale “Dead and Gone” featuring Justin Timberlake, but that just goes to show how complete of an album “Paper Trail” is.

With very little filler and a strong selection of songs from start to finish, the hype that this is potentially “album of the year” according to Atlantic Records may ACTUALLY be true. There’s still three months left in 2008 and a fairly good year of albums leading up to this point, but whoever wants to take T.I.’s #1 spot after today is going to have to put it in overdrive in a MAJOR way. Congratulations to T.I. on finding the perfect balance of comedy and tragedy, swagger and humble attitude, pop music and hardcore hip-hop, living up to the nickname “Jay-Z of the South” in a big way.