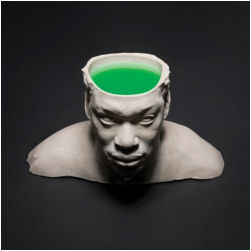 It’s been a little while since Roots Manuva last blessed the album circuit – and his return is as solid as ever. Essentially a fans’ favourite (without them knowing it yet), he has distilled pretty much everything he has ever done into his new opus “Slime and Reason.” So if anything seems familiar, it is simply because he doesn’t stray far from his well-trodden path – although what is immediately noticeable is the relentless barrage of melodies. On every track, you’re looking at least three separate winning melodic hooks, and the result is a densely-packed sonic soundscape that takes a few listens to crack, all without seeming like hard work. We’re looking at hip hop, dub, bashment, everything rolled into one – it flows together flawlessly, and Roots himself blends perfectly into each track.

It is certainly more a case of “music first,” as the big Manuva plays a slightly more subdued and secondary role to the excellent beats here – and that isn’t necessarily a criticism. Sometimes MC’s – due to their gigantic egos – attempt to dominate the track, filling every spare moment with their voice, not realising that simply allowing the music room to breathe would be a more successful strategy. There is no issue on that count, and what is even more apparent is that the MC has matured nicely. Less interested in making a name for himself, he seems content on piecing together a strong, consistent album – the outcome isn’t an intense headphones epic, more an LP that needs open air to shine.

From the bounce of the opening sing-song “Again & Again” to the subtle ragga riddims of “Do Nah Bodda Mi,” or the R&B of “Let the Spirit,” something here reminds me of Pharoahe Monch’s most recent album, “Desire.” You find an MC maturing nicely, without dropping full-lengths frequently, that goes crazy on different musical genres, clearly having fun in the process. It is a joy to behold, and somehow it all fits together brilliantly.

Prior to hearing the album for myself, I was somewhat skeptical about the critical acclaim that “Slime and Reason” was receiving, almost universally. Roots Manuva has, to an extent, traded on “Witness” and being plain cool for a while now, being a critical darling without displaying the traditional essential traits of greatness. But the album is an excellent listen from start to finish, and a generally successful snapshot of London in 2008. More than that, the music is rock solid – the scaling electronica of “Do 4 Self” and the lamenting soul of “The Show Must Go On” are testament to this. If I haven’t spoken about the MC himself, it is because by this stage, he needs no explanation – he does what he has always done well, only this time without ego. That lack of arrogance helps him to make possibly his most consistent album ever, and thus thoroughly recommendable.