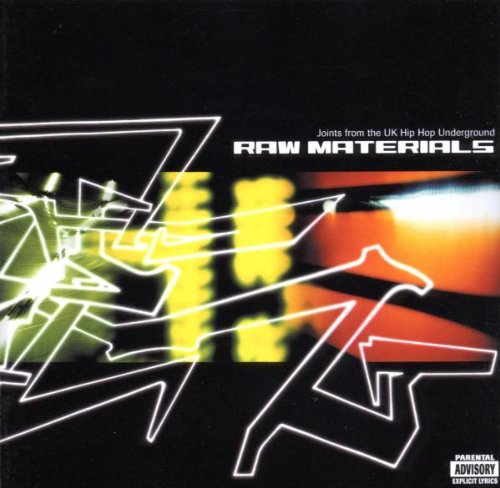 To be completely honest, although I do consider myself to be quite knowledgeable about rap music in general, the UK Hip Hop scene is not one I’m very familiar with. In fact, of the twelve cuts presented on this compilation, the only featured artist I believe I’ve heard of is Roots Manuva. And considering the incredible strength of his solo LP (check it out, if you haven’t already), I anticipated great things from his fellow British countrymen on “Joints”. Suffice to say, I was not disappointed. Not by a long shot.

That’s not to say that it didn’t take some getting used to, though. First listening to the album, it’s a strange adjustment for a North American rap fan like myself to get accustomed to the British accents heard within. And that in itself is the main sticking point that seems to divide peoples’ opinions about this CD. I personally found myself digging it though, because it can allow for some pretty original flows and rhyme schemes, like on “Cobblestones” by Braintax:

“Your hard-rock style’s got you believin’ what you’ve written
Check the mirror, and talk about the things you see
Hold a mirror up to life and talk about what’s free
We could freestyle forever, whatever, I’m all for it
But don’t be sayin’ rhymes you just invented in the toilet
In the back of the club…”

It may sound mundane in writing, but listening to it, you notice “things” is pronounced “fings” and so on. This is the kind of subtlety that really distances UK hip hop from American hip hop. Another is the strong Jamaican influence found on tracks like Skitz’s “Dedication” or London Posse’s “Style”. If you’ve ever heard Kardinal Offishall, you have an idea of what I mean.

Unfortunately though, I think that because of the way most of us listen to hip hop, our first impulse when hearing this album is to compare each of the MCs to similar-sounding American (read: more familiar) counterparts. But I think that by doing that, it’s like comparing apples and oranges. Judging by what “Joints” delivers, UK rap is an entirely different ball of wax than American rap. But it’s like trying to describe the difference between American and Canadian rap. The differences are definitely there, but you might only notice them if you choose to seek them out.

So rather than doing that, let me suggest that you choose to seek out this album instead, and set aside any preconceived notions you might have. “Joints” is the type of thing best listened to with an open mind. “Havin A Laff” by Haych is an instantly catchy track that will appeal to fans of Redman, Busta Rhymes, and Del alike. It’s by far the album’s most energetic cut, with a heavy, bouncing beat and entertaining lyrical delivery. Funky DL’s “I Love My Life” is another nice track, with its openly positive “move forward” message. The light piano sprinkling and snare should get you moving too. “I Hate Da Jiggy” from Apollo is genius, lyrically. The beat could be a bit more interesting, but honestly, it’d be fantastic even without a beat. It’s rare to hear someone who’s pissed off at wack rappers, and still sound so nice:

“What you tellin’ me? I’ll tell you what you’re tellin’ me
You’re tellin’ me more riddles than BBC with David Bellamy
Eatin’ yam and banana and explain it’s been an English dish for centuries
in many English families (you’re wrong!) Poppycock
Give me two American MCs, I’ll put ’em in a headlock
Show them the real hip hop…”

He knows full well he can only pull off using the word “poppycock” because he’s NOT an American MC, and exploits that. Of course there are more standout tracks here, like the atmospheric and darkly jazzy “Dungeon Town” from the Brotherhood, and, yes, Roots Manuva with “Wisdom Fall”. Raw Materials seems to have put this collection together to serve as sort of an introduction course to UK hip hop for the uninitiated, and that’s certainly what it was for me. But even if it’ll be a refresher course in the subject for you, give “Joints” a go regardless. For any real Head, this should be mandatory listening.