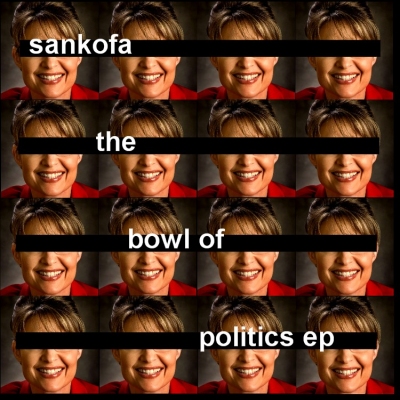 Sankofa :: The Bowl of Politics EP

Before I get to my review, I want to remind all of the RapReviews readers who are U.S. citizens over 18 years of age to register to vote, and actually VOTE on election day. Seriously. And I won’t tell you who to vote for, but you should vote for Obama. And know your shit when you step into the election booth: if politicians knew they were facing an informed, young pool of voters who weren’t easily tricked by slogans and campaign ads, and were mad as hell and not going to take it anymore, things could be a lot better in this country.

And now on to Sankofa.

“The Bowl of Politics EP” is Sankofa’s third free downloadable EP this year, following “Music With Friends” volumes one and two. The last installment saw Sankofa jamming with a live band and getting his stream of consciousness on. It proved that Sankofa can bust a mean non-sequitor, and “The Bowl of Politics” proves that he is just as comfortable composing a cutting deconstruction of a vice presidential candidate.

As the title of the EP suggests, this is all about politics. Sankofa takes on the Bush administration, right wing journalism, Sarah Palin, even hip hop politics. Opening track “The Making of Believe” attacks both mainstream rap and hipster tastemakers. The track makes the personal political, with Sankofa expressing his frustrations as an indie rapper, and criticizing the herd mentality:

“I visit a different mountain a day and see no wise men
I heard some catchy rappers and sought to flow like them
So my pen writes rimes on sheets of scrap paper
Hoping to interact with tracks and fat flavor
Don’t trust your own ear? Geez-ask your neighbor
The one getting freebies, yeah, Mr. Tastemaker
But Mr. Tastemaker doesn’t come with his own spine
Backing today’s fad just like he’s been paid to
Hey dude-not trying to insult, just enlighten
Take this silly game’s rules and customize them
Cause it sucks to write when connects equal rep
And I’m not that outgoing, the sweat and the stress
The ink and the dreams has me thinking it seems
A blink and a scream away from king trinkets and fiends
Was once destiny, now it’s just rehearsing
Keep working, till I’m taking bows like a tree surgeon
It really doesn’t matter how feeble the thesis
cause it’ll be an anthem if the people repeat it
so if he says it and she says it and they say it
then it is, it must be”

“Heirloom” takes on George W., and echoes the frustrations that a lot of us have been feeling for the past eight years:

“No proof shown but childish promises are made
We’ll just take his word for it when the lives are at stake
I see fields dotted with white crosses each night
Cause it’s better to save face than it is to be right
War the pep rally for re-election campaigns
Spill blood to show we did it right
They can’t claim we hit it halfway like Vietnam
Damn a protester. We’ll just take away their permits
9/11 the best thing to ever happen to this lame duck
Instant clarity, just add support from the brain trust
Came up, and now America is Tupac
Us against the world with missiles instead of new glocks
If I do not agree, then I am un-American
The highest son’s inheritance, the dying young prepare to win
The hawk’s patience is wearing thin
And what’s a vote in a land where a king rules”

He keeps it serious on “They All Die,” a good but depressing song about war that originally appeared on his “Tortoise Hustle” album. “Equipped” takes on the media and the financial system which has allowed the few to prosper at the expense of the many. “Someone’s making decisions, I’m guessing it’s not us” Sankofa raps. “Bottom line is somebody had to make up the lost bucks/ Meanwhile cost cuts mean factories go overseas/ Or at least over borders, soaking up an ocean breeze.” The final track, “Lipstick Fangs,” skews Sarah Palin for being the inexperienced, unqualified, scary-ass conservative she is. It’s also the most upbeat track on the album, with Sankofa declaring that he’s going to run for office, since if Palin can, anyone can.

I’m not sure who did production on the EP, but they keep it somber. Most of the tracks are sparse and mid-tempo, allowing Sankofa plenty of room to drop his science. It’s not the best party music, but it’s ideal for getting your think on. Sankofa’s rapping is impressive as always, and his lyrics are insightful and clever. He’s a smart dude with a lot to say, and he says it well. Best of all, it’s free to anyone with a reasonably fast internet connection. Go download “The Bowl of Politics EP” now. It’s the perfect soundtrack for reviewing your election guide and preparing to vote the Republicans out of office.