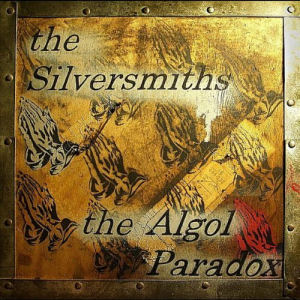 Silversmiths is a collaboration between Fort Wayne, Indiana rapper Sankofa and San Luis Obispo, California rapper JOHN?DOE. I’ve been a fan of Sankofa for a few years, and I’ve heard of but not heard the un-Google-able JOHN?DOE. “The Algol Paradox” is the first of three albums recorded by the duo. The album name references an astronomical phenomenon involving the paradoxical growth of binary stars in the Algol system. and they describe the work as “Like the Beastie Boys and 2 Live Crew watching Monty Python at a hookah bar.”

I’m not sure I see the Beasties or 2 Live Crew comparison, but “Algol Paradox” is definitely the sound of two friends having fun with the music they are making. The two rappers make a conscious decision to approach hip-hop with a humor. “Mr. Zogg’s Curios and Pawn Shop” starts with an intro of Mr. Zogg describing a box of angry raps, and Sankofa and Doe proceed to spit said angry raps, making fun of the whole concept. “We the three far from wise men checking your anger,” raps Doe. “We so wrong, and yet you listen to the whole fucking song.”

The two rappers have different but complimentary styles. Doe has the smartass style of pre-rehab Eminem, while Sankofa sounds like a more conversational Aesop Rock. Maybe he’s the Yauch to Doe’s Adrock. Both MCs are prone weaving complex rhymes packed with five dollar words, so much so that their verses can become tangles of syllables that are difficult to decipher. Their rhymes are filled with a smart sense of humor and sense of irony, using humor to criticize contemporary hip hop while dropping solid bars. “Remember loving is good but murder’s for the kids/Raise our daughters to be hookers/And our sons to catch bids,” they rap on “ODB,” a song that uses gangsta rap to examine the effect of violence on society. In that sense they remind me of Das Racist, another crew whose deceptively goofy rhymes disguise deep thoughts on race, sexism, and the state of hip-hop.

Like Das Racist, the Silversmiths are backed by good beats. The album is produced by ognihs, who produced the White Collar Criminals (White Collar Criminals: Invest-Mentality). He mixes in elements of Middle Eastern and Indian music into his beats. Both “Facebookin’ With the Maharajah” pair languid drumbeats with the buzz of a sitar. Ognihs also captures the feel of 80s 808 electro and electronica on “Attack of the Killer Robot,” which sounds like something from the original Tron soundtrack, “ODB” with its rinky-dink synths, and “Grown Man Rap,” which sounds like Miami bass music. “Cheat Codes Part 1 and 2” sample video game soundtracks.

“The Algol Paradox” is available from Amazon

or for $4 for a physical CD. If you pay three bucks for the download you get a remix of “Murder Mischief” that is worth the money. With its strong beats and funny and insightful rhymes, “The Algol Paradox” is definitely worth a listen.