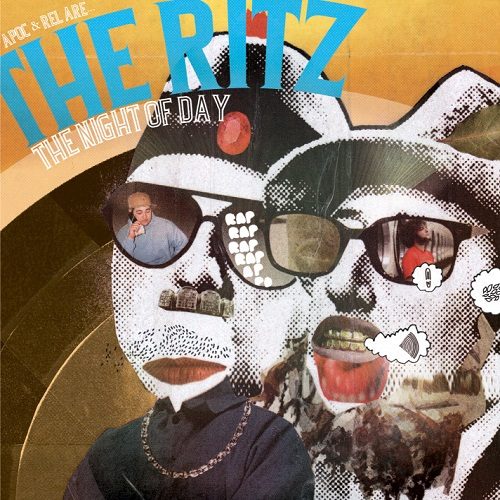 The Ritz :: The Night of Day

Chicago’s emcee Apoc and Rel on beats have collaborated in the past, but make it official in their debut album, “The Night of Day.” With their interest in 40s and 50s film noir that glamorizes the era and crime scene movies, the duo attempt to conceptualize their idea through their music while incorporating featured artists such as Psalm One, Moodswangz, Elfamail, Brendan B, and Racecar.

The Ritz’s “The Night of Day” was, at most, an ambitious attempt to think “outside the box” with the group’s inspiration of 40s and 50s Hollywood style crime dramas that emphasized moral ambiguity and sexuality. However, the only influences that seemed to be present from this era were the overused sampled movie clips in each track. In many of the tracks in “The Night of Day,” a huge amount of time was wasted and devoted to extensive clips from movies that didn’t make much sense at all. Featured in the beginning and ends of most of the tracks, it was exhausting at times to hear the overworked incorporation of the clips as it almost seemed as though space was trying to be haphazardly filled. The unnecessary instrumental tracks of “She Lived By Night ” and “Good Times, Girls” consists of slow, uninteresting beats that feature even more redundant movie clips from start to finish. To give you an example of the extent to which The Ritz excessively uses the movie clips, the album’s title track exemplifies this perfectly. With its high pitched harp like sounds throughout “The Night of Day,” a surprising last whole minute is devoted to back to back movie clips. Call me crazy, but I’d rather hear some solid rhymes and beats during the last minute of a track to conclude the song in order to make it memorable.

The album, “The Night of Day,” also fails in other areas while trying to achieve avant-garde status. There are few things that are innovative in an album when it reverts back to the mundane subject matter of drinking, partying, and girls. It’s not your average “bitches n’ hos” album, but it focuses a great deal on accentuating the flaws of women. Wits its strings, trumpets, and flutes in “Heartless,” Apoc endlessly describes an uncaring and ruthless woman as “Too Late for Tears” shows how a woman’s attempt for forgiveness comes too late. “Chiaroscuro” focuses on a Apoc posing as a hitchhiker who is picked up by a mysterious, but drunk woman. Clearly, many of the woman depicted and described in “The Night of Day” have many flaws, perhaps a way for some lingering scorn that is yearning to be released. Furthermore, the redundant theme of partying, drinking, and drugs permeates throughout the album in tracks such as “Langston Bukowski” and “Waiting for the Sun to Set” as Apoc describes how he counts down the hours until it is nighttime so he can party some more.

Unfortunately, subject matter is not the only problem in “The Night of Day.” The situation is this: emcee Apoc’s lyricism lacks strength and fluidity. His lack of clean and concise rhymes had me lost on many occasions as his attempts of rhyming in double time got me even more confused. A majority of the time, I didn’t understand his rhymes and therefore, was completely flustered in trying to dissect his lyrics. Also, for some odd reason, Apoc decides that it is interesting to change the sound of his voice in various tracks such as in “Waiting for the Sun to Set” where he attempts to deepen his voice, but instead. sounds more like he is congested. His constant accentuation of words and sounds is distracting as his lyrics are typical and ordinary.

On the other hand, the album does delivers some creativity and worthwhile listening on a few occasions. With The Ritz’s idea of incorporating themes from 40s and 50s era crime scene flicks, Apoc takes an interesting turn with his lyricism in track “The Night of Day.” As if he were filming a movie, Apoc rhymes about a supposed filmed movie and its various scenes. Imaginatively, Apoc incorporates different camera shots in his lyrics to show how the movie is being filmed as he says:

“CUT TO CLOSE UP:
Flames flicker in the man’s eyes
PAN RIGHT:
As he pulls away a metal white and tan pipe
Scans sight
Squints eyes as he skims the scant light
A tramp’s flight, timely
CUT NINETY:
Finally finding what his eyes see
Tires sliding
Headlight slightly blinding
Not minding
Our soaked subject saunters into vision”

Although I have heard many abstract albums that try to carry out the components of a movie, The Ritz’s “The Night of Day” lacked in what I have seen in others. I can see where Apoc and Rel were going with this album, but it was not executed correctly. The cohesiveness from one track to the next was not present as a listener, like myself, could easily get lost in the chaos. The Ritz definitely has a vision in mind that could potentially be grand and with the right lyricism, beats, and sound, could clearly be on to something great.

The Ritz :: The Night of Day
5.5Overall Score
Music6
Lyrics5