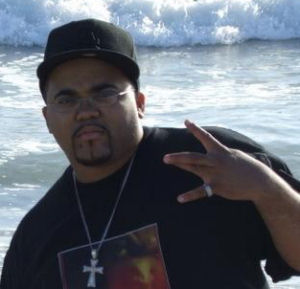 Hallway Productionz may not be a household name yet, but brothers Teak and Dee Underdue are already associated with some of Hip-Hop’s finest. The California duo produced four of the songs on Ice Cube’s latest album, “Raw Footage“, they’ve worked with WC and Blackalicious, and they’ve even ventured outside of Hip-Hop, working with R&B singer Ledisi. With the Underdue brothers clearly poised to be the next big name in music production, RapReviews caught up with Teak ‘Da Beatsmith’ to find out more about Hallway Productionz, what their signature sound is, and how they linked up with Ice Cube.

Adam Bernard: Since you’re a fresh face, and sound, on the scene, start everyone off with some background info. Who is Teak ‘Da Beatsmith’ Underdue? Where is he from and how did he get his start producing?
Teak ‘Da Beatsmith’ Underdue: I’m from a town called Stockton, California, which is in Central Valley, California, right by Sacramento, an hour away from Oakland. It’s a real musical city. My mom was a musician, she played bass. My father was in the Black Panthers, so there’s politics and music in my whole family. At the age of two I started playing drums. I picked up the bass guitar at about 13. I started playing keys when I was 16. While I was in college I started playing guitar, so I’ve been doing music for almost my whole life. I started producing towards the end of high school. I dabbled with it in the mid-90’s, but I really got focused on it in about 1997. From there I just hooked up with a lot of local artists in my area and started working with them. That’s pretty much who I am. I’m a musician first.

AB: It sounds like you’re a producer in the full sense of the word, you know all the instruments.
Teak: Yes, exactly. That’s our main distinction. Right now people are just hearing the hard stuff, the west coast stuff, but we actually get in there and put chord changes to our music and sometimes it’s startling. Even with some of gangster rap stuff we’ll put in some complicated chord changes, but it’s so gangsta that people don’t really pick up on it, they’re just like “wow that shit’s hard.” Music is always first, but I don’t knock any kids that are banging on the keyboard, or the computers. At the end of the day all the guys that are really producing, everything comes back to making music.

“I would say it’s very eclectic. I listen to so much stuff.”

AB: How would you describe the sound of a Teak ‘Da Beatsmith’ Underdue track? How much does it vary?
Teak: I would say it varies a lot. The chord thing is always in the music and there’s always going to be a nice groove with bangin drums. I would say it’s very eclectic. I listen to so much stuff. I’m a huge Dr. Dre fan, but at the same time I’ve really been getting into what Death Cab For Cutie and The Killers were doing a few years ago, even bands like Rooney. I’m listening to all of that stuff, listening to the production. And I listen to music very slow. If a lot of people are listening to it I kind of will shy away from it and wait until all the hype dies down and then I’ll take a full look into it.

AB: I guess you find out if something is truly enjoyable at that point or if it was all just hype.
Teak: Yeah, my friend Jay introduced me to Death Cab. Actually he let me hear Postal Service first. I listened to it and I was like “I’m not sure if this is for me, so I should wait a while to listen to Death Cab,” and you know the sound is totally different. So I go at my own pace.

AB: You work as a team with your brother Dee. What different elements do you each bring to the table?
Teak: My brother created our core sound, that street, hard hitting sound. Anytime I’m making a record I’m putting his sound in my records. D’s sound is a whole lot more edgier and street while mine is a little bit more musical. There’s no telling who made what sometimes. If you listen to any of the records we’ve produced it could be me or D, or both of us together.

AB: Your most recent work can be heard on Ice Cube’s “Raw Footage“. How did you link up with him?
Teak: Being from Stockton it’s a small town and everybody from Stockton kind of knows each other. The guy who is our acting manager, his name is Dave ‘Dizmix’ Lopez, he’s from Stockton and me and my brother played in the Franklin Jazz Band here in Stockton and he played in the same jazz band, as well. He’s about four years older than me. We kept in contact with him for a long time. He moved out to San Francisco and started mixing in various studios, then he moved out to LA and made a real solid name for himself doing engineering and mixing. Over those years he met WC and DJ Crazy Toones and they developed a real close relationship both musically and business wise. Over the years Dave’s been in contact with them we’d send him music and he’d really like it but tell us to keep working on it. In about 2003 / 2004 we started making a real big name for ourselves in Central Valley, CA, so he took note. He was at a crossroads, too, because he wanted to expand his business, so he said he’d agree to manage us if we kept sending him music. We sent him a lot of music and he gave it to DJ Crazy Toones, who is Ice Cube’s DJ and WC’s brother. Crazy Toones had the music for a while and one random day a light went off in his head like these guys are dope, we should start giving WC some of these beats to rhyme to, so WC started recording to some of our beats. This was back in ’04.

AB: And the Westside Connection came through for ya.
Teak: Yeah, exactly. WC started recording to the beats and Crazy Toones just felt real comfortable with where our head was at and the direction of our music. Late winter in 2004 he gave Ice Cube a CD just with beats on it right before Ice Cube went on vacation and he came back and he wrote to three of those beats. From there it was just history. He kept asking for us. Two of those beats that he wrote to, one of them was on the XXX soundtrack and it was also in the movie, and the other beat was for a song called “Dick Tease” which is a bonus song on Laugh Now, Cry Later. So the very first joints he wrote to were in a movie and on an album, which is crazy for us.

AB: How many of the tracks did you do on “Raw Footage“?
Teak: We did four. It’s the most by any producer. When we found out we were really happy about that. The four songs he did with us he recorded first. With the process for an album, if someone records four songs we hope half of them make it, at least one, but the whole time all four of those songs held up.

AB: It sounds like they were the foundation for the record.
Teak: When I found out it was just crazy and it’s a huge honor for us. The songs are “Hood Mentality,” “Why Me,” “Cold Places” and “Thank God.”

AB: What are you working on now?
Teak: Right now we’re promoting the “Raw Footage” album, which is in stores. We’re working with another artist out of LA named Young Malay. He’s a young up and coming emcee who is really dope. We work with a Bay Area group called Blackalicious, they’re pretty much legends out there. Chief Xcel is my cousin and we’ve been working with him since 2001. We’re working on some records for Ledisi, who was nominated for a Grammy last year. I just got a call from gospel rapper T-Bone, who is an incredible emcee and actually got nominated for a Grammy two years ago, and we got nominated, too, because it was an album nomination, so we’re working with him again. We’re expanding our clientele from that. The door is wide open.

“A lot of people, they’ll see songs pop up on albums that we did, like one or two, and they’ll be like you guys should do whole albums.”

AB: Do you prefer working on individual songs for different artists, or taking the reigns for an entire album for one artist?
Teak: You know what, both. A lot of people, they’ll see songs pop up on albums that we did, like one or two, and they’ll be like you guys should do whole albums, but we’ve been working on whole albums for most of the time we’ve been producing, just locally. The only thing is if you do a whole album there’s a huge risk for flops, so even if you do your best work on an album, if the album doesn’t do well the producers take the heat for it, but we’ve been doing it for a long time so I feel comfortable doing both. The little one off, two off songs that are on the big albums only help you get to a place where you can produce a whole album. Or like WC’s album, Guilty By Affiliation, we did like six of the fourteen songs. The fans loved it and it just built our credibility towards doing whole albums.

AB: Who do you want to work with next?
Teak: I’m so spoiled working with Ice Cube, so the legends, they’re really solid people to work with. I would love to work with a Jay-Z, even a Will Smith or an LL, I just feel real comfortable with these guys. You give them music and it’s no foreign territory for them to turn it into an incredible song. Besides that, anybody. Who wouldn’t want to be part of a hot record? But at the same time our track record is of being the guys who make really good music and the artist brings something to the table that’s not just shaking your ass. I would love to work with a lot of artists, even if it’s a few club bangers, but the meat and potatoes has been about the music so far.