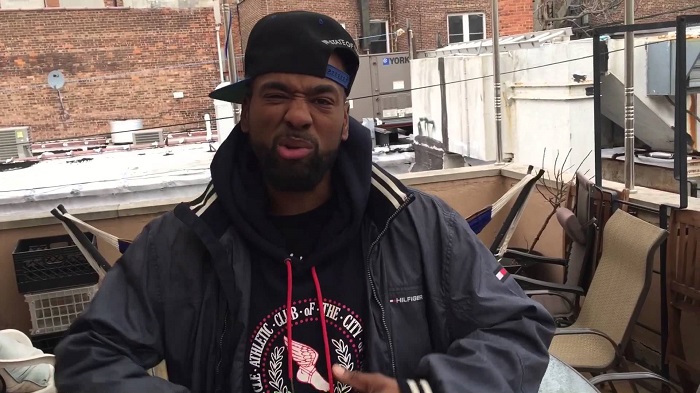 When Brooklyn hip-hop duo the Cella Dwellas (U.G. and Phantasm) dropped their debut album, “Realms N’ Reality”, back in 1996, it was hailed as an underground classic. With street lyricism combined with dusty samples and hard drums, they epitomized the New York City rap scene at the time. Their second, and last album to date, was released four years later along with a shortened name change to the Dwellas. The album, “The Last Shall Be First”, was also released on Loud with similar consistent production and lyricism from the duo. And unlike their debut, it included guest verses from rappers such as Smif-N-Wessun and Inspectah Deck. But the hiatus between 2000 and now left hardcore fans craving more, a craving that went unsatisfied until now.

They still performed at shows in the past decade, and U.G. recently dropped a solo album entitled “Portals”. We had a chance to talk with him recently about several subjects. From what went into his first solo album to his take on the current state of hip-hop, U.G. gave brief but poignant and humble answers to our inquiries during this interview.

RapReviews: First off, thanks for taking the time to interview with us. How are things going with you, U.G.?

U.G.: Everything is great, thank God.

RR: You released your first solo album, “Portals” in 2016. After years as a duo with Phantasm, what were the factors that went in to you wanting to put out a solo record?

U.G.: I just wanted the Hip Hop culture some dope music. Plus, I wanted to challenge myself to make a solo album.

RR: I heard one of the singles recently, “You Already Snow” featuring Celph Titled. I remember he shouted you out on his 2010 Buckwild-produced album “Nineteen Ninety Now”. How’d you hook up with Celph for a collaboration?

U.G.: I met fam through IDE, we did a record together and after that we became fam. Celph Titled is dope, shout-out to Celph Titled.

” via the Brooklyn-based Creative Juices Music. What was it that attracted you to that label?

U.G.: I liked the way IDE worked. He was always going the extra mile in whatever he did. So we got together and made it happen.

RR: Creative Juices founder, IDE, produced the entirety of your solo album. Were you seeking a uniform sound with just one producer that you couldn’t find by having multiple producers?

U.G.: Nah, I could have called up Nick Wiz and a couple of producers but his sound was just dirty. Drums was all nasty, records crackling, and the samples were out of here. So it worked out fine.

RR: In 2011, the Dwellas put out the single with M.O.P. “I Put It Down”. Between the release of your last group album and then, what were you doing during the hiatus?

U.G.: Real life kicked in, you know. Marriage, kids, etc. But I was still making music learning how to produce and a lot of other things.

RR: As an emcee, who are your influences? When I first heard you on “Realms ‘N Reality”, your style sounded like an amalgam of the best parts of the Wu-Tang Clan and the Boot Camp Clik.

U.G.: Nah, I was my influence. I made the mystical style up talking about Dungeons & Dragons, so I wanted the world to hear it. But I did listen to a lot of rappers like you said Boot Camp, Organized Konfusion, and others.

RR: Do you have an interest in metaphysics or physics? You’ve made several references to physics concepts in your lyrics over the years.

U.G.: No doubt, it also had something with the lyrics like wizards defied physics by floating in the air and stopping time you know things like that. So I put it in my lyrics.

RR: On your solo album, which tracks are you proud of the most and why?

U.G.: Hip-hop has changed just like all music changes: Some of it is wack and some it is cool. I just can’t rock with the mumble rap crap.

RR: Which emcees are currently in your rotation?

RR: Ok, I thank you again for taking the time to interview with us. Is there anything or anyone you’d like to shout out?

U.G.: Hell no. Nah, shout-out to IDE (Creative Juices Music), everybody that was on the project, and God for enabling me to make music. Without Him, I am nothing.