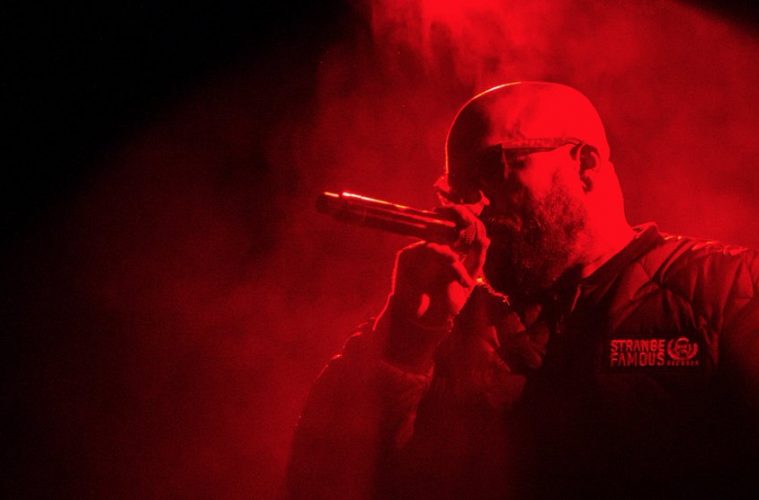 B. Dolan quietly released one of year’s best underground hip-hop albums in 2015 with his third LP, “Kill the Wolf

.” The Strange Famous emcee also released a live album in early March titled “We Show Up: Live Recordings 2013-2015” ahead of his Kill the Wolf U.S. tour.

” dropped last summer and was his first studio record since 2010. Dolan brought in 30 different collaborators to execute the vision he had for the record, which is the first he’s self-produced. “Kill the Wolf” features a moving tribute to Ol’ Dirty Bastard called “Who Killed Russell Jones?” The song also takes a hard look at how American culture treats artists with substance abuse problems.

Ahead of his Chicago stop, B. Dolan chopped it up with RapReviews about his new album, tour and who has the more epic beard between him and Sage Francis. Dolan also hinted at a forthcoming full-length project with his label mate and long-time friend under the name Epic Beard Men. He also talked about his conflicting views on “White Privilege II” by Macklemore, of whom Dolan has been critical on social media.

“The activist in me thinks it’s generally positive that white rappers are talking to their white fans about white privilege,” he told RapReviews. “The rap fan in me wants to hear good fucking music though.”

Check out our full chat below:

Zach Gase: You’re about to kick off the U.S. leg of your Kill the Wolf

tour after spending the last few months of 2015 overseas. Do you take a different approach to your shows in the U.K./other countries than here in the U.S.?

B. Dolan: I take a slightly different approach in countries where the crowd doesn’t speak a lot of English. Luckily the phrase “put your fucking hands up” seems to be universally understood. We had a wild time in Europe last year. Played for 3,000 anti-fascists in Athens, had a really insane show in Transylvania and played packed rooms all over the U.K. and Ireland. If anything, a lot of those European audiences tend to be less inhibited and self-conscious than some American cities can be. When you play big U.S. capitals sometimes half the crowd are rappers standing there with their arms crossed, looking cool for each other. I feel like there’s a bit less of that overseas, but there’s also less of that in Omaha, and you might have a great crowd in NYC even when you’re expecting that attitude. Eventually you just learn to work with whatever vibe you find, no matter where you are.

Zach Gase: You took five years between your last album and “Kill the Wolf,” why such a big gap in between releases?

B. Dolan: Five years is how long the official album took. I released two mixtapes in that time and did hundreds of shows, but I had a very specific vision for what the next official LP should be like and it took awhile to bring that about. Over 30 collaborators were involved in that album, and it was the first time I ever self-produced a project of my own, so we were re-inventing the wheel to a certain extent. I wanted to see what was possible if we really marshaled the best of everything we could do. How good we could make it sonically, how good the arrangements and the hooks and the riffs could be. It was ambitious but that’s how I keep myself from getting lazy. I seek out the feeling of not knowing what the fuck I’m doing.

Zach Gase: Back in 2014 your label mate/friend Sage Francis dropped an album, and he mentioned you in the lead single, “Vonnegut Busy.” How did your life and career parallel Sage’s during that time?

B. Dolan: Sage was referencing what happened to us in 2010 on that track, and it was a dark year. My father was diagnosed with cancer in March, just as I released “Fallen House, Sunken City” and was about to embark on 6 months of touring. He released his “L(i)fe” album that year as well, and we did a lot of touring together. While we were on the road, his father died suddenly. He cancelled one show, flew home, buried his dad and flew back to the tour. Then when we were in Europe, my father’s health took a nosedive, and I had to drop off the Australian leg of the tour to go home and be with him. Right around that same time period, Eyedea died. It was an insane year. If I remember correctly, Francis flew directly from Eyedea’s service to my father’s. That year took a lot from and out of almost everyone I know.

Zach Gase: You and Sage have done a couple songs under the name Epic Beard Men, do you two ever plan on doing a full-length project together?

B. Dolan: It’s in the works as we speak. I shouldn’t say too much too soon, but so far it’s been a lot of fun and many bangers are on deck.

Zach Gase: Who has the more epic beard, you or Sage?

B. Dolan: I reject the premise of your question. Have a couple drinks and you’ll realize we’re the same person. At least that’s what the drunks at the merch booth keep telling me.

Zach Gase: You’ve also recently gotten married, what is married life like as an indie rapper who spends a lot of time on the road?

B. Dolan: It’s good man. Me and my wife have been together for 14 years now, which is nuts to think about. I wouldn’t have married her if she wasn’t a soldier. I wasn’t looking for a housewife or a ball and chain or whatever the fuck other people seem to have going on. She’s the type of chick I would want to have my back in a gunfight, so the trust is never questioned. So far, knock on wood, we’ve learned to make it work, and the about to leave / just got home sex is frankly the shit. No complaints.

Zach Gase: “Who Killed Russell Jones” is one of my favorite tracks off of the new album. What made you write a song that references Ol’ Dirty Bastard’s death, more than 10 years after he died?

B. Dolan: ODB is one of my favorite rappers and probably always will be. He was completely original in rap. There’ll never be another of him, and his talent is really inspirational to me. I was probably just thinking about him and how tragic it is that he’s gone.

B. Dolan: He says “Over state lines on an ’89 Sebring” in his verse, and I forgot that a Sebring was a car. I remembered that a couple months back and fully appreciated that line. Had to Google it to see what an ’89 looked like. Looks like something Don Johnson would be making a getaway in. Respect the BARS.

Zach Gase: Chicago singer/poet Jamila Woods appears on “Run the Machine,” how’d you link up with her?

B. Dolan: That was a weird one because I wrote the lines she performs and had a very specific idea of how I wanted them said. I actually just did some researching and found her through Twitter, and it turned out we had a bunch of mutual friends due to my old associations with the spoken word scene in Chicago. Her poetry is really dope, and then all of a sudden once we’d made the song I saw all this stuff she was doing with Chance and her solo material started coming out. I’d definitely like to do more work with her soon.

Zach Gase: She recently was featured on Macklemore’s “White Privilege II.” I know you’ve had some strong opinions about him in the past, what do you think about that song in particular?

B. Dolan: I still haven’t heard it. My only strong opinions about Macklemore are that I don’t like his music, and that his style often sounds derivative of a lot of indie rappers though he never seems to big them up or credit them. I think he sounds like Slug. I think he sounds like Brother Ali. I think “Same Love” sounded like a watered down version of Sage’s song “Best of Times.” But it is what it is. Get money, Macklemore. The activist in me thinks it’s generally positive that white rappers are talking to their white fans about white privilege. The rap fan in me wants to hear good fucking music though, and doesn’t like that slam-poet earnest facade feeling I get from so much of his shit.

Zach Gase: In addition to your tour, are you working on any projects in the near future? Anything you’d like to add?

B. Dolan: I’m at that place where I’m working on a bunch of things I’m excited to talk about, but totally shouldn’t talk about them until they’re closer to being ready. I’m writing a lot, for a lot of projects. For now though it’s still about “Kill the Wolf,” which came out in July, and a surprise live LP called “We Show Up” we’re about to release this Friday to coincide with the tour. There’s also a DVD in the works, which I hope will be ready by Christmas. We’re doing 40 dates on this tour, including stops at Treefort, SXSW and Low End Theory. I’m bringing a dope package that includes Felix Fast4ward from Denver and Haphduzn from Minneapolis on the Chicago dates. My job for the next couple months is going to be making the live show as kickass as humanly possible. I’m looking forward to that.

Check out B. Dolan on Twitter at @BDolanSFR and get Kill the Wolf