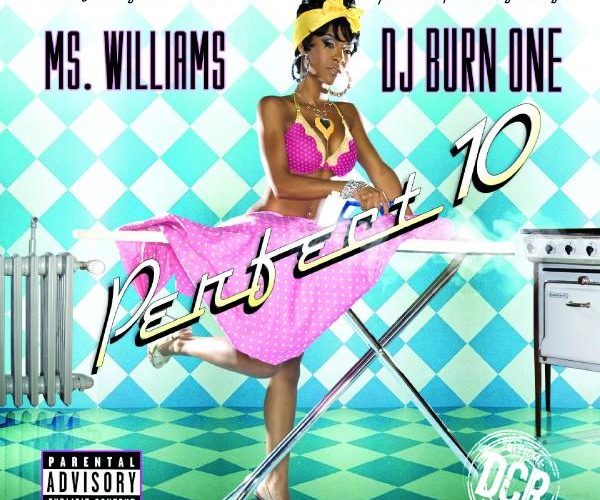 If we’re being perfectly honest about it I’m a little biased in favor of this project. Over half of the tracks on “Perfect 10 Mixtape” feature or are produced by (or both) my man The Cancer. I’ve been hosting hisDan-e-oand his fantastic program Tha O Show each and every week. Maybe there are more dope producers out there who want to do their own weekly podcast. Aiyyo Kanye! If you’re a Brock Lesnar fan, give me a call! Seriously though I’d make the same apologies as to bias if I reviewed anything from Dan-e-o or the Monolith crew, because even being dope if I don’t know you means there’s a chance I could overrate you because I do. It’s one of the most vexing conundrums of being a critic – meeting people in the industry you really like yet needing to still be as unbiased as possible about the work they produce.

Fortunately for The Cancer the fact that I’m not intimately familiar with Ms. Williams is helpful to maintaining my bias. I know, some of you out there must be tearing your hair out and throwing shit at the computer right now. “FLASH, HOW CAN YOU +NOT+ KNOW ABOUT MS. WILLIAMS! SHE IS THE BOMB! SHE HAS 8 MILLION BAZILLION HITS ON MYSPACE! YOU STUPID MOTHERFUCKER!!” Okay fine, I admit it. I completely missed out on the Ms. Williams phenomenon – don’t know how and don’t know why but I did. She was completely off my radar. I must have had my head buried in a crate of old records looking for my copy of the awesome BDP “I’m Still #1” remix when the bulletin flashed on my screen, and by the time I looked up it was gone. If like me you didn’t know about her then you can hear her talk about her credentials on K4D #50, but to make a long story short she’s a fly looking honey who can model AND rap to make money. Once Cancer started featuring little bits and pieces of shit he produced for her on the air, I realize it was time to take my hand off the snooze bar. The Cancer and Ms. Williams aren’t going to rest with just eight million hits on MySpace though, and so the “Perfect 10 Mixtape” is a chance to take things to a whole new level. Williams is spitting on a sex kitten/Missy Elliott type vibe on the opener “Turn Da Lights Down Low”:

“I got the honey kisses, I know you want some
Focused on my frame while I’m playing with my tongue
You see my fatty go badum-ba-dum-dum
Got you on stuck like, ummmmmmmmm
I know you see me baby, now turn off all the lights
Let me climb on top and show you what it feel like
I can row the boat, I can ride the bike
I can get it loose, or I can keep it tight”

For those who like big beat hits and not much else, the Kidz With Machine Gunz track for the first song be perfect. Personally I prefer the follower “Drop It” that Cancer produced, because it combines a dance club vibe with a hypnotic melody and scratching on the hook. This is the kind of track you can imagine Britney Spears trying to make a comeback on, although with Ms. Williams the sex vibe is more authentic and much less “burned out TMZ crack ho sans K-Fed”:

“When I be up in the club, all the boys they wanna dance with me
Starin at my cakes, know your man wanna romance with me
I shake it, don’t break it hate me – he wanna date me
I’m amazin, like haze and blazin – I’ll keep ’em waitin, waitin
On the line cause I’m so fine (fine)
Baby I’m a quarter, what you want with a dime!”

One advantage the Ms. Williams “Perfect 10” mixtape has over a lot of the other free mixtapes you can download right now is that it’s largely constructed from ORIGINAL beats. Even if you weren’t feeling Ms. Williams as a rapper you couldn’t hate on her for just spitting over everybody else’s hits like 95% of the mixtapes out right now. Ms. Williams is versatile enough to keep things interesting though – she’s not just keeping it sexy despite the fact she probably could get over off hormonal interest alone. In fact she’s got a rather gangster girl vibe at times. On “Goblin” you’ll hear KWMGZ lace an eerie track with Lil Wayne samples while Williams brags “Rhyme spitter, hood go getter/Female Godzilla, name a bitch that’s iller!” YOWZA! She’s hardcore enough to even get literal gangster heavyweights like Bonecrusher to flow with her on “Bottom Drop” (also featuring Playboy Tre) or Yung Joc on “Peep Da Game.” Ms. Williams is ridiculously serious about her rap – hard as the hardest G but still somehow packing more sex appeal than Trina and Halle Berry at the same time. Now that shit is deadly as cancer (no pun intended). She may be the next Lil’ Kim with half the hoe and twice the flow.

If I have one and only one complaint about “Perfect 10” it would be that we have to hear the occasional “DJ Burn One” samples punctuating songs, with the match strike sample blatantly ripped from Dr. Dre accompanying it. I really don’t know what Burn One had to do with any of this project – I don’t see his name down as rapping, scratching or producing a single track on it. Maybe he gets a little credit for distributing this… no because The Aspen Agency is doing that. Maybe Drift City Records (listed on the album cover along with Aspen) is his label. Funny how I can’t find anything for them on the web though – a MySpace page that may or may not be theirs with no friends and no tracks to listen to, and a website that says “under construction” that has a different DCR logo than this release. Well at least Burn One picked the right project to hitch his name to because Ms. Williams will probably have another million hits on MySpace before all is said and done. Biased, yes – I do think Cancer’s beats are the best on this mixtape (particularly the title track) but since you can download it for free yourself you be the judge. Ms. Williams lives up to the hype though – she’s not just a pretty face with a lame rap, she’s a pretty face that might just shoot you IN the face if you don’t show her respect. Ms. Williams has all of mine.