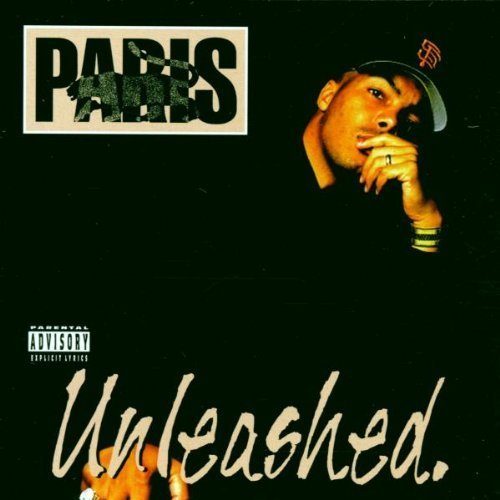 Paris exemplifies what a rap career should look like. After one hit album, Paris’ label tried to censor him due to his controversial art work. Paris sued his own label, settled for a decent sum and then proceeded to go independent. Guerrilla Funk Records has been one of the most successful independent labels since its inception. Paris has never had problems getting a distribution deal and continues to drop quality albums. “Unleashed” remains his most overlooked and ignored album. Released under a one album deal with Whirling Records, “Unleashed” bears the distinction of being the only Paris album not sold on his website and not given the “Deluxe Edition” treatment. Likely, Paris’ contract didn’t allow him to retain rights, but the album itself might play a part in its obscurity. Outside of being out of print, the album is arguably Paris’ most different work of art. While the fire, fury, and funk that made Paris famous is all present, “Unleashed” is Paris’ least political and most gangsta album.

To his credit, Paris does touch upon some serious topics on “Unleashed.” “Record Label Murder” condemns the recording industry:

“Now what would you do, if I blast
all up in yo’ shit, motherfuck the whole staff
Niggaz know I flow, nine millimeter shittin slugs
I’m seein bloody bodies on the motherfuckin rug
Six o’clock be the time if it’s on let it be
You see it in my eyes, ridin through, hella deep
See, bitch you ain’t gon’ do me like you did Da Lench Mob
I’m decorated in this game, I played too motherfuckin long
Now – I ain’t gotta name nobody name
All I’m knowin is the whole fuckin roster is complainin
Talkin bout these white boys tryin to do promotion
And white bitches tryin to get fucked by these soldiers
Talkin with that slang like you down but now hold on
See now that’s enough to get yo’ devil-ass stole on
Fuckin with the wrong nigga, playin with my cash
I’m known for puttin devils on they motherfuckin back
Blast through the front do’, what the fuck I’m ‘posed to talk?
Fuck court, I’ll be a dead nigga ‘fore you walk
Brownout at nine, had no motherfuckin mercy
So who the sexy nigga, bitch record label murder”

Through vicious raps Paris attacks the record labels which have tried to screw him over the years. The difference is that tracks like this are a rarity on “Unleashed.” On “Conversation” Paris spits verses that are reflective of the topic matter on the album:

“Still in this bitch, ninety-eight is just another year
I murder money drama bitches, that fall in piers
Comin out the city where no pity be a way of life
When niggaz quick to bust a cap in you to earn they stripes
Ain’t nothin changed in these West coast killin fields
I seen so many homies die that I ain’t got no feeling
So I handles mine, pack a strap and keep on strivin
And quick to let these niggaz if it get down to violent
Cause these haters ain’t no friends to me, they make it plain
But I refuse to be a victim of these ghetto games
Break away from all the stress, bullshit and aggravation
And now I’m quick to blast if you want a confrontation
But it seem like every time I turn around it’s drama
Hella flowers, coffee drinkin, and cryin momma
Somethin tellin me this madness ain’t gon’ never stop
So I keep strivin fo’ the top”

Paris is much more gangster on this album and at some points sounds like he’s nothing but gangster. “Mob On” is a collaboration with Spice 1 where Paris once again talks some trash. It’s a dope track and the beat is funky as hell, it’s just a little unexpected. The same thing can be said about “Blast First,” where Paris focuses on survival of the fittest. “Thug Livin” is a dope collaboration with the underrated Nuttso where the only positive message is that drug dealers should give back to the community. Still, despite the lack of a positive message, the raps and beat are dope on this one. “Heat” is along similar lines as a venomous Paris throws his wrath at haters.

So there you have it, “Unleashed” was Paris’ attempt at capitalizing on the mob sound that ruled the bay area during that time. That is not to say it’s a bad CD, it is not. Yet, one can’t help but notice that it’s a little different to the Paris we were used to. Either Paris got frustrated with being pigeon-holed as the political rapper or he got frustrated with the fake gangsters ruling the airwaves at the time. Either way, Paris came hard on this one while still injecting a political and positive vibe at times. In fact, “Unleashed” might be the type of CD best suited for introducing unfamiliar fans to the black panther that is Paris. It’s not as political or outright militant as Paris’ other CD so it could be used to slowly wean a gangsta rap fan towards something more political. Long time Paris fans who missed this release will probably enjoy it, but it’s not worth some of the OOP prices I’ve seen posted. Wait for the right time and get it for under ten bucks. New fans should hit up Paris’ music before and after this CD to get a real feel for the man.