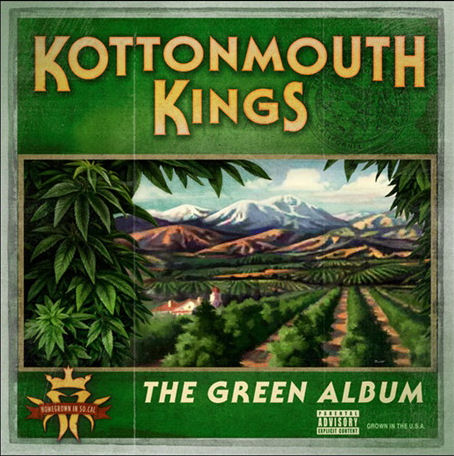 Twelve years. Ten albums. It’s been a long, strange and defiant TRIP for the Kottonmouth Kings, the unapologetically proud suburban potheads of hip-hop. “Unapologetic” is the key to their success. Many rap artists with pale skin or middle class backgrounds automatically start on the defensive, assuming they’ll be attacked for not having the authenticity to contribute to what’s traditionally been a poor and urban defined artform. That defensive attitude itself becomes a turnoff when listening to “real” music – by the time you’re done hearing somebody explain how “real” they are for the 100th time you couldn’t care less if they are or not. It also misses the point. Some of the trippiest hippie backpacker rappers you’ve ever heard come from the most gang-infested projects, and some of the hardest and crunkest artists you know actually grew up with all the trappings of wealth and luxury. That doesn’t make either group phony by default. If being an experimental and loquacious MC comes naturally why act like a gangster for no good reason just because you come from Compton? Be yourself. The Kottonmouth Kings embody the “be yourself” philosophy to a tee. They come from the middle class and still kick ass. They don’t apologize to anyone. They smoke trees, drink beers, get pussy and party constantly. Their cult following expands like the cloud of haze following their tour bus. If you try to stereotype them as lazy dopeheads then you can’t explain the fact they’ve sold over two million albums thus far, or the fact that their live show is one of the most energetic and entertaining in all of hip-hop. Even if you hate their music or what you think they stand for you can’t not respect the strength of their hustle.

“The Green Album” comes at a time when it’s arguable that the Kings have reached the peak of their fame, although the group will no doubt contend they can get HIGHER with double entendre totally intentional. Marijuana is in fact the one defining trait for Daddy X, Lou Dog, D-Loc, Johnny Richter and DJ Bobby B – after all the group’s name defines one of the symptoms of excessive pot smoking. Looking through a catalogue of their albums would be akin to looking through the pages of High Times magazine. The artwork for their latest album depicts a lush field of green extending as far as the eye can see towards snow-capped mountains and the inner artwork is even more explicit – a forest of pot plants aiming high towards the sky emblazoned with a KK logo proudly reading “Homegrown in Southern California.” The song titles will definitely make parents who follow the “just say no” policy (even if they smoked a little pot as kids themselves) nervous. Some like “Blaze of Glory” and “Plant a Seed” are subtle, while titles like “Green Grass” and “Trippin” are anything but. In fact the latter song is all about not knowing if you’re coming or going, starting when an alarm clock rouses the crew out of a sleepy haze:

“When I woke up today, I felt so out of place
Like I was from outerspace
I didn’t know a single face
Guess I must be trippin!
[…]
Rough and tough back again is the backyard bandit
Come through smash in a slam dance fashion
DGAF’n and laughin out loud
Cause to me, MC means move the crowd
But for now (now) I need to put the mic down
(Put the-put the mic down, put the-put the mic down)
Cause I’m trippin like herbal in a mushroom cloud”

Production on the album is handled entirely in-house by Daddy X, Kumagai and P-Nice. Individual songs are not credited as to who did what, so it either doesn’t matter or they got so high that they completely forgot. It’s probably the former. Guest rappers ARE credited though and you might be surprised by a few of the names. “Freeworld” features Brother J from the X-Clan. He still belives in truth, justice and equality but clearly he doesn’t object to working with caucasoids any more. Neither does Tech N9ne on “Sex Toy,” one of the hardest hitting songs musically or lyrically on the album. While it’s likely to be a huge underground hit for the group it could also be a huge crossover hit thanks to a sing-song chorus and N9ne’s guest rap – they’d just have to clean it up for radio first.

“I see you lookin at me, starin at Tech Nina baby
I hope you know how far will it go cause I’m vir-geena crazy
So come and play with me everyday with me lay with me
Hey if we spray a fee I pay the fee she sedated me
I am the coochie mane I get wilder when you get tamed
Was tryin to screw thee dame but the woman had cootie thangs
If you want Tecca Nina for sick wicked nudie games
So fresh and so CLEAN CLEAN, baby dirty is truly lame”

There are a lot of different songs on “The Green Album” worth blowing the haze away to see clearly. “Blaze of Glory” has a folk rock Everlast type vibe that’s pleasant enough, a vibe you can also hear on the country influenced “Pack Your Bowls” – one can picture KK on tour with Rehab here. “Rock Like Us” and “We Don’t Give a Fuck” embodies their energetic “Rip-Hop” style and delivery if mosh pits are your thing. Although not widely regarded as lyrical craftsmen in their careers, songs like “Where I’m Goin” and “Rainfall” suggest thoughtful reflection on their careers and having a spiritual relationship with nature. The album also deserves props for being mixed in a smoothly flowing mixtape-like manner, allowing you to skip to individual tracks but still blending together into a cohesive whole. That implies a level of time and effort you wouldn’t expect from people who sit around smoking trees all day, which is also suggested by the fact their press release claims they recorded SIXTY tracks while making this album before paring it down to the 20 best.

The Kottonmouth Kings are donating a percentage of “The Green Album” to environmental causes like SurfRider Foundation as well as to organizations like Ward 57, helping wounded soldiers returning home from the war in Iraq. It seems to me that no matter how much haters want to categorize the Kottonmouth Kings as selfish, unmotivated, rich and lazy suburban potheads they continue to defy the odds and wind up making more progress musically and artistically. I can’t claim to be a fan of every single track on “The Green Album” – sometimes the “Rip-Hop” they do is just not my thing, and sometimes they’re a little too folksy for me even if you do like the kinder gentler post-HOP Everlast stylee. Nevertheless you can’t deny their success or the fact they make the kind of music their fans want to hear with no apologies for being stoned out suburbanites from California. Rock on Kings – keep doin’ ya thing.