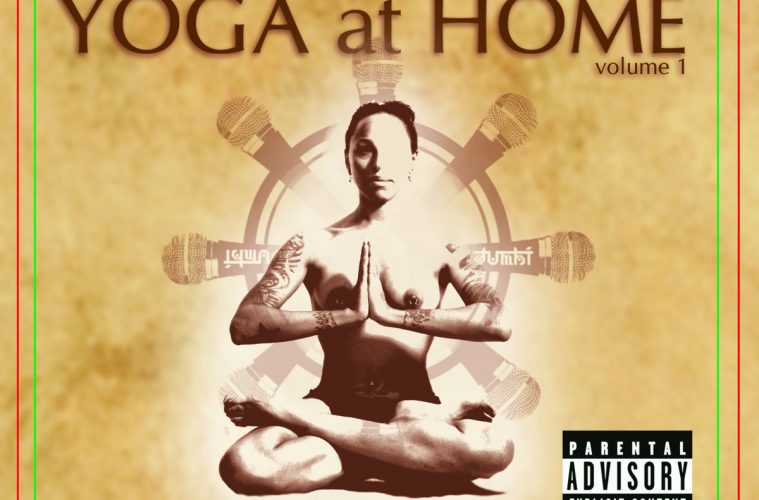 At first glance, hip hop and yoga don’t make the friendliest of pairs. What could hip hop possibly have in common with this originally spiritual and intimate practice which has gotten watered down as its popularity has skyrocketed, converting it into a mere vessel for pop cultural fads? Oh waitâ€¦ I guess that does sound kinda familiar.

The metaphor goes much deeper than that, though, if you take the time to listen closely. While you can rest assured that the rappers on this project don’t spout Buddhist teachings or illuminate the workings of various yoga positions, on a different level they are enacting their own communion with the divine through their musical meditations. As the press release states, the “extended metaphor of home yoga techniques” is used to “celebrate the benefits of all therapeutic practices which can be performed in perfect solitude,” whether it be through “exercise, meditation, music, art, or even the funky mystic buddha leaf.” The narration by Master Swami Vishnu leading into each track keeps the “Yoga at Home” thread going without belaboring the concept or stretching the metaphor beyond the breaking point.

If all of that sounds hopelessly esoteric and lacking in immediacy, then chuck it out the window and enjoy the EP for its most notable accomplishment: dope, head-nodding hip hop. Haj of Dumhi breathes life into these tracks with a swanky style that sounds both old and new. The sound is dominated by melodic samples hand-picked to match each other and the mood of the album as a whole, and the musical focus lends itself to a nostalgic feel that leaves you expecting the crackle of an old LP in the background.

“The Yoga at Home Theme Song” mixes an undecipherable sped-up vocal sample with some old-timey wind instruments that could have been pilfered from a Lawrence Welk Show episode. Sadat X’s rhymes are the most explicitly tied to the yoga theme as he pontificates on his weed smoking habits and labels them his own “yoga at home,” asking, “What could be better?” “Sun Exercises” has a more laid-back vibe of the west coast summertime variety and is beautifully set off by the occasional cowbell hit. Che Grand employs his equally chill charm on the beat, again praising the herb while kicking game to a lady friend. The whole song is so mellow that you might not even notice the change in topic halfway through when Che starts talking about getting locked up for being “young, black, and outside” at the wrong time. The relaxed spirit is back in full force with “Go Left” featuring Kay of The Foundation and Soulbrotha. This bass-heavy beat boasts one of the most memorable vocal performances on the album, not necessarily because Kay and Soulbrotha spit the best rhymes but because their raps take center stage much more than is the case on the other tracks. A catchy hook of call-and-response “go left’s” helps in this regard. “The Benefits of Practice” is another song whose lyrics will catch your attention, as Random and Trek Life’s animated voices and flows draw your ear as much as the understated beat.

“Relax” featuring Doap Nixon and “Breathing Techniques” featuring Von Pea and Jermiside go in the opposite direction, featuring hypnotic beats that vastly upstage their lyrical counterparts. Jermiside does, however, drop an impressive verse at the end of the latter song with a flow that sounds like a cross between Elzhi and Wordsworth and a rhyme scheme to match â€“ and yes, that’s quite a compliment. The final song with vocals is the album’s best, as Reef the Lost Cauze drops by to lend his talents to “Squeeze.” More than any other, this track achieves a harmony between rapper and producer wherein neither is overmatched and each seems propelled forward by the other. The music on this one is more traditional rap boom-bap with an electric guitar sample that builds tension between aggressive horn patches and random voices yelling in the background. Reef gets his battle rapper persona revved up before switching up to a more vulnerable re-interpretation of the song’s title, rapping in the chorus, “So I squeezeâ€¦and I bleed and I breathe and I’m found on my knees beggin’ the Lord please let me in, when I leave when I squeezeâ€¦” And so on, until he pleads, “Save me Father / My father ain’t raise me, father.” The song continues in this vein briefly before converting these frayed emotions into uncontrollable anger and bringing things full circle, back to the vitriol of the track’s first verse. It’s an absorbing performance made all the more profound by the beat’s own inner turmoil.

Interestingly enough, an album espousing inner peace through spiritual reflection ends on this note of personal trauma and retaliation, leaving you to ponder the potential meanings on the closing instrumental “Meditation.” From there, you get a chance to relive all the best moments of this short EP through the instrumentals, which are just as enjoyable without vocals. In fact, hearing them on their own allows you to fully appreciate their many nuances and makes the original tracks sound even better the second time around.

Collaborative efforts like this often sound thrown together, as if each track were its own separate idea, no matter how much vinyl wizardry links the songs. “Yoga at Home” most decidedly does not have this problem. The beats are meticulously composed, the lyrics â€“ while taking a clear back seat to the music â€“ are effectively delivered, and the concept ties the EP together neatly without straining credibility. Until Volume 2 rolls around, “Yoga at Home” will be an indispensable aid to your own metaphysical progression, or at least a sweet soundtrack to your every day life. Gotta keep those expectations reasonable.