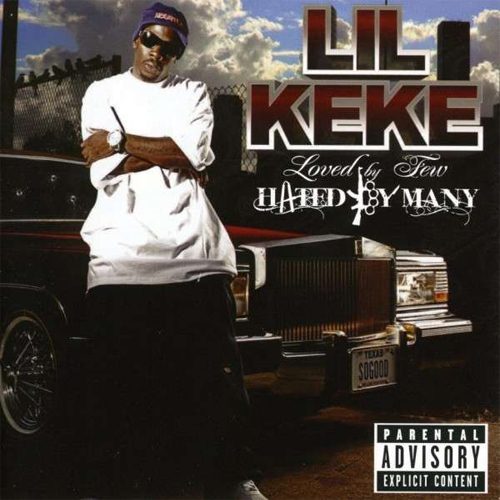 Lil’ Keke :: Loved By Few, Hated By Many

There are certain mythical albums in the hip-hop game. Albums that were pushed back so much, shelved for so many years, forgotten by so many, that their very existence is called into question. Cormega’s “Testament” was one of those albums until bootleggers and an official copy leaked the CD. KRS-One’s “Maximum Strength” falls into that category and even his “Maximum Strength 2008” release didn’t answer those questions. In this digital age, it’s harder for albums to get lost in the shuffle. If the label shelves the album, chances are some low level crony will have stolen a copy and sold it to the bootlegger by that time. Somehow, Lil’ Keke’s “Loved By Few, Hated By Many” managed to fall into that category the last few years. I’ve been a Lil’ Keke fan for over ten years, banging that Don Keke from the minute his classic “Southside” song hit the radio in high school. I’ve followed him from big time indie success with his “The Commission” CD to small time indie failure with his Koch Records deal. I followed him back to the indie game and was hoping for big things when he signed to Swishahouse Entertainment â€“ the major without a major deal who just happened to get a major distribution deal through Asylum. That was a good three years ago, maybe more. He’s had a lead single for the album on more than one occasion and each time no album surfaced. Out of nowhere, the album is finally here with little promotion save for a few radio ads.

“Loved By Few, Hated By Many” starts out on a promising note with “Act a Fool.” Though Twisted Black dropped a song with the same name a couple of years back, Lil’ Keke’s version of the rambunctious, ballers anthem is not too bad. “Boss” is the first of quite a few uninspired songs. Rick Ross already did the “boss” song and every song will be compared to that song. Lil’ Keke’s version doesn’t advance a thing and even comes close to sounding like Rick Ross’ version whether coincidentally or not. “Money In The City” is the current radio hit down in Houston and mimics the Akon/T-Pain formula. So-so singer, though Auto tune is mostly absent, generic synth beat and a whole bunch of rappers. Even with Slim Thug, Paul Wall, and Trae joining Keke one can’t help but notice the track’s generic nature. Slim Thug’s verse is dope though, shining light on his current situation and acknowledging the fact he hasn’t dropped an album in three years. “Miss My Boyz” finds Keke slowing things down and doing his own thing as he drops a dedication to the fallen SUC soldiers (which sadly consist of most of the original Screwed Up Click). The beat has the deep funky bass line which classic Houston songs are known for and Keke is on top of his game:

“Ain’t nothing in the world more expensive than free
It takes a whole lifetime to pay the cost of a G
My little home done ten, but at least he alive
And all them he came up with is either dead or retired
And some inside, they still waiting for ‘role
I pray my hold they head where its dark and cold
You can’t win em all, that’s what the old folks say
It’s like trying to sweep leaves on a windy day
Take a look in the mirror cause it’s all bout you
They say it’s hard but its fair, man it’s sad but it’s true
The first thing I learned is by adding and subtracting
You movie star need to quit acting
Bumps in the road I just used them for lessons
Getting a piece of mind, I considered them blessings
Ain’t had a real clear thought in a long time
It’s a dark grind but I will shine”

Lil’ Keke possesses one of the smoothest flows and most recognizable voices in the game and he uses it well here. The next track is “4 Doors and Coupes” and begins the downfall of the album with its clichÃ© love song steez. Keke has cars and they are nice and women like them and he uses them to seduce women. You also get “What It’s Made For,” a horrible Bangladesh produced joint which features wack singing. Bangladesh is usually on point but fails with this high-pitched R&B mess. “Phenomenal” is another bland ladies anthem that appeals to the gold diggers. “She Loves Gangstas” is followed by “Suga Daddy” and both contribute to the R&B thug overkill on this album. I don’t mind the ladies tracks, but we have 5 tracks dedicated to the same topic on a 13 track album. It’s a bit too much by today’s standards. The non-ladies tracks include the banging “I’m a G” that’s been out since the summer. “Traffic Slowdown” is not bad, but a bit generic â€“ screwed hook, synths, etc. “Scholarships 2 The Pen” is more akin to Keke’s style as he spits cautionary street tales. “Slab Holiday” is only the second song on the CD that sounds distinctively SUC as the funky bass line drives the track.

Lil’ Keke disappoints big time on his latest CD. The sappy, radio friendly songs contained here are a far cry from his SUC roots or even the early Swishahouse music. The need for radio play after landing a major label deal is understandable, but filling a CD with nothing but sappy and commercial tracks is wack any way you look at it. Gone are the funk-heavy bass knockers that we’re used to hearing from Houston. Gone is Lil’ Keke’s signature street savvy lyrics. This just doesn’t sound like a Lil’ Keke album. I can’t say whether the change has to do with the current Houston rap scene, label pressure, of Keke being lazy, but overall I can’t recommend this album. If you’re new to the man peep his “Don’t Mess With Texas” or the re-packaged version “The Commission.” Longtime fans are free to check this out, but be prepared for a let down.