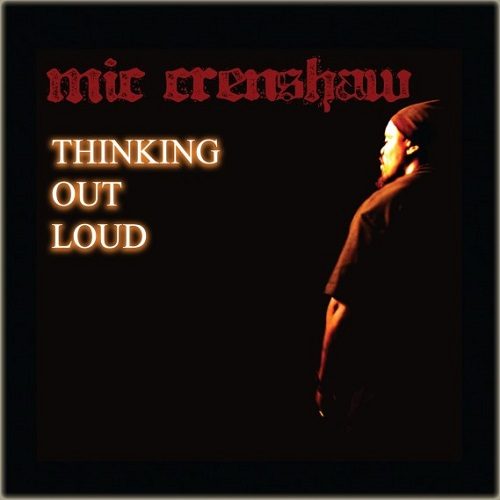 Mic Crenshaw is part of what I hope is a growing movement within hip hop: rappers who use the art form to promote positivity and social change. He is the third rapper in as many months that I’ve crossed paths with who has background in non-profit work and/or education (the others being GaKnew Roxwel and Random). A social worker/teacher getting into hip hop would be a dicey proposal if they lacked skills to go along with their good intentions, but GaKnew, Random, and now Mic Crenshaw all have the ability on the mic to compliment their passionate beliefs.

The Portland-based Crenshaw has an impressive bio that includes time in the poetry slam circuit (like GaKnew), founding an anti-racist skinhead crew called the Baldies, and co-founding Global Fam (www.globalfam.org), a non-profit that helps refugees displaced by war. He has previously been part of hip hop groups like Suckapunch, Cleveland Steamers, and Hungry Mob, before going solo with “Thinking Out Loud.” Mic is a commanding presence-he’s well over six feet and has a shaved head-and he has a commanding voice to match. He could have used this to scare the hell out of listeners with tales of murder and drama, but instead chooses to inspire us to think, not fear.

The album starts off with “MC Duz It,” in which Crenshaw reinterprets “Eazy Duz It” over a latin-tinged funk beat. The production sticks out right off the bat, with a lot of the tracks incorporating live instruments, including live drums. The live music adds an energy and vitality that keyboards and drum machines just can’t replicate, and makes the whole album stand out. “Take ‘Em Out” has a nice shuffling jazz beat over which guest MC Nightclubber Lang takes the system to task:

“It’s not to criticize
They won’t admit their lies
Distract you on TV with titties, hips, and thighs
I sympathize with the people
Cuz they’ve been hypnotized
Living like they are under control
I tell ’em to improvise
Poverty is often the reason for being uncivilized
[…]
It’s all politicized
It’s not a big surprise
Large amounts in offshore accounts is where their interests lie”

Crenshaw’s mix of message and beats hits its mark on several tracks on album, including “Thinking Out Loud” with its burping funk beat and the G-funk of “On the Move,” on which Crenshaw, rather than rapping about drugs and violence, drops lines about “helping men and women standing on their own two feet.” He uses the plunking strings and farting synths of “What We Want to Hear” to take radio to task, and drops a nice acappella freestyle on “Teach It.” He even channels Bad Brains on the rocking “Follow Your Instincts,” which is about as good as rap rock can get.

There are also some missteps, particularly the track “America.” It starts off with a bluesy guitar riff and Crenshaw rapping about the problems facing the country, almost reminiscent of Atmosphere’s “Guarantees.” It would almost be a great song except for the hook, in which a singer sings “America can you feel me/party people where ya at, y’all/holla holla if you hear me/speaking the truth so don’t fear me.” Then she goes into “America the Beautiful” towards the end, turning what could have been a sincere missive on what’s wrong with this country into something totally cheesy.Crenshaw’s intentions are untouchable, and he clearly means what he is saying, but he falters in the delivery. It’s like he has so much to say that he tries to say it all at once, which means that both his message and his lyrics aren’t totally intelligible. He has a forceful presence, but his rhymes sometimes sound forced.

Despite some rough edges, “Thinking Out Loud” is a good disc, and further proof that hip hop can be a force for positive change. Crenshaw redefines “keeping it real” to mean staying true to your beliefs rather than being a thug, and I hope his definition of real, and his take on hip hop, become the norm. We need less rappers talking about making it rain, and more dropping lines like “everybody has a right to be free.”