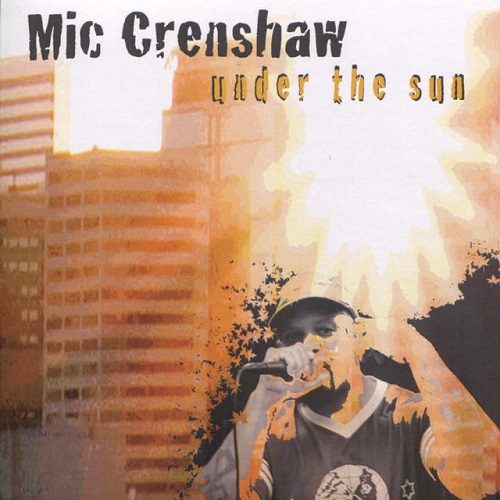 Mic Crenshaw :: Under the Sun

Mic Crenshaw got off to a good start as a soloist with his 2008 debut “Thinking Out Loud.” He had already been bubbling up in the Portland underground through rapping with various crews and cliques, competing in poetry slams, and his well recognized charitable work helping refugees in war-torn countries like Rwanda. Once he broke out in his own though he earned praise from Patrick Taylor for his solo work: “Mic is a commanding presence – he’s well over six feet and has a shaved head – and he has a commanding voice to match. He could have used this to scare the hell out of listeners with tales of murder and drama, but instead chooses to inspire us to think, not fear.”

Taylor’s right. Normally when you hear a rapper is named “Crenshaw” you’d think he’s hard as hell, although the Chicago born and raised rapper might have chosen “Cabrini-Green” for his name if he was inspiring fear. That’s not to say Mic Crenshaw isn’t a hard emcee, but his hardness is cut from the same mold that made Paris wage “Sonic Jihad” on the world. While Crenshaw is generally less bitter and vitriolic than the rapper I’m comparing him to, his vocal tone is equally imposing and his mistrust of government and police is definitely in the same zone, though not quite amped up to P’s Black Panther degree. Still on “CIATFBI” the sentiments would not be unfamiliar to a fan of hardcore, political and slightly militant hip-hop music:

“I learned at a young age to be wary of police
As they tracked us and attacked us and beat me in the street
Both because of my blackness as well as my beliefs
Between the pigs and the Nazis, I had a lot of beef
As I got older and more mature I started to see
That it was peace I had to practice if I wanted peace to be
My enemy’s not a white boy, poor and broke and lost
But the belief that I’m a servant to a master or a boss
So I carry myself with purpose, I’m not perfect but I walk
with an awareness of my surroundings, my aura and my thoughts
So when that fool attacked I just neutralized the threat
I put him on his back and kept one hand on his neck
My intent was to hold him, not to hurt him
I had already told him, that I worked there
His boy grabs me from behind and he lifts me in a chokehold
Dude pepper sprays me blind, he hits me but I won’t fold
Before he knew my name, he grew afraid of my frame
They instigated and escalated an incident, it’s a shame
Was he acting on his own, or did he have directions?
If it was just his perception then the public needs protection
The perpetrator’s M.O. is unprovoked attacks
Where he insist on using force and his goons have his back
So many people get jumped and it’s not right or necessary
The police don’t respond, they endorse this predatory
use of force…”

There’s little doubt that Crenshaw puts a lot of time and thought into what he’s going to say before he writes it down and/or records it. His lines aren’t just constructed to rhyme or flow, they’re carefully organized to tell stories and teach the listeners without coming across like a civil activist who decided to try and “reach out” by rapping and came off corny. There’s not one bit of cornball in Crenshaw at all, and the nine songs of “Under the Sun” are serious work. The hardest hitting might be the Autono produced “Yeah,” where M.C. intimidates haters by promising “blunt force trauma on your front porch” yet when attacked he escapes like a Professor Xavier soldier: “Tried to stop me but I turned into smoke/I rose into a cloud now everything is soaked.” For the more mellow side of M.C. “Grounded” offers a stream-of-consciousness flow and a very minimal Auditory Sculpture beat, plus crooning by Toni Hill. Crenshaw doesn’t need a lot of sound to make a track work “Back and Forth” is little more than a drum clap scraped across a bass hit, and works perfectly.

Production is the one thing holding back “Under the Sun” though. It’s slightly above average most of the time, borderline to being damn good on occasion, but nothing here reaches the level of hotness that drops your jaw cause your ears can’t believe how dope it is. That may be by design given that Crenshaw is way above the average as a poet and orator, but one can’t help but think that if he linked up with Alchemist or Polow Da Don on even ONE song that his fame and notoriety would immediately skyrocket. Since he doesn’t appear to be in it for the money or the fame (in fact he donates a lot of what he earns to his charitable causes) it’s likely he’s happy at the level he’s at now though, and if he’s alright with it then “Under the Sun” is as good as any of his albums can be. I give him much respect for using his not inconsiderable powers of size and stature on and off the mic to do some good in the world.