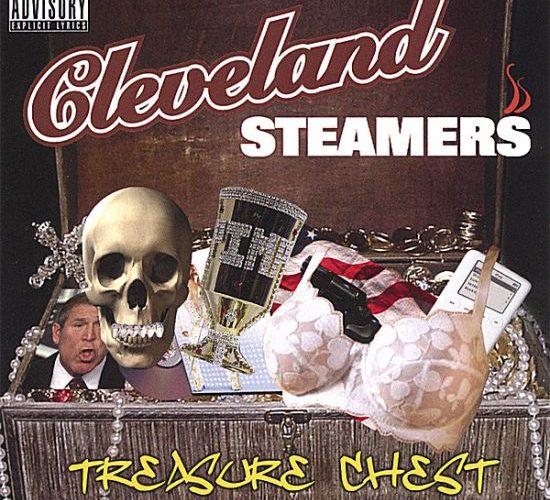 Don’t let the name fool yaâ€”the Cleveland Steamers are neither from Ohio nor a sex-raunch novelty act in the same vein as 2 Live Crew. Nor is their music as disgustingly juvenile as their name or their cover art (which features a wack Photoshop montage of blinged-out skulls, bras and pimp cups) suggest. I’ll reference the old adage and urge you not to judge a book by its cover, as if this were a book, it’d be something like Vonnegut’s masterwork “Cat’s Cradle” wrapped in one of (his notoriously-recurring character) Kilgore Trout’s tawdry dime-store porn pulp covers…yes, the contrast is that extreme. But let’s get to the business at hand: despite the awful name and more awful artwork, Portland-based trio Cleveland Steamers are one hell of a group; musically and topically united, the recently-formed trio of Hip Hop veterans showcases a collective craftsmanship, versatility, knowledge and humor that is sorely lacking in the current maelstrom of get-rich-quick “artists” who couldn’t distinguish Ed O.G. from Special Ed. With two MCs (Gen.Erik and Mic Crenshaw) and a DJ (Aero) handling the lion’s share of mic controlling, scratching and boardwork, Cleveland Steamers can’t help but remind me of the good ole days, when being Hip Hop meant being multi-talented (remember the 4 elements anyone?!), original (as in fresh, dummies), and confidently self-assured (a genuinely believable self-assuredness built up over many years and based on endless practice and performances, not just vain cockiness and pipe dreams, like today’s youngins). On “Treasure Chest,” then, the album title is more telling than the nom-de-plume and the artworkâ€”there are indeed plenty of rare and valuable jewels to be found inside.

So whose chests are these Hip Hop junkies deucing on? Sometimes its simply on folks messing up the game, as CS devotes two tracks to dissing the wack, “Rap ClichÃˆ” and “Don’t Do That.” These familiar staples of the underground are saved from pointlessness, however, by the many hilarious and spot-on details Gen.Erik and Mic C. throw into the stew, such as scathing impersonations of greedy-but-stupid MCs and ubiquitous corporate radio DJs. In addition, they showcase a level of self-awareness that’s pretty refreshing (last line of above song: “writing a song about rap clichÃ©s/ that’s just another rap clichÃ©!”). In addition, they use the also-hilarious “Undergroupies” to shit on drunk girls at shows in a viciously candid yet still self-depreciating manner. Finally, CS save their biggest load for our commander in chief, on the ingeniously-sampled “The Decider,” in which DJ Aero scratches in numerous ridiculous and heinous “Bushisms” while the two MCs verbally taunt him in between. Seriously, with a president this goofy and incompetent, ridicule through exposure is much more effective than any angry tirade could hope to be.

Extending this disgusting metaphor even further (I just can’t stop myself), the Steamers have more targets for their acts of defamation. Did you know some people (call ’em what you like-freaks, sexual deviants, scatological psychos) actually like the aforementioned act? In the same way, Hip Hop heads can resemble freaks in their quest for and love of good shit (pun intended). In that case, CS drops plenty of hot material that hits straight to the, ahem, chest. The guest artists, ranging from producer Mic Q to Rhymesayers’ always-killer I Self Divine, are uniformly dope and are used as they should beâ€”to enhance the flavor of the main course. Whether it’s the deliciously fleshed-out party jams “The Groove” and “Rock That Shit,” the introspective and political musings of “It’s Been Alone,” or the purely celebratory bangers “Day by Day” and “Skull Bone,” CS know how to bring it like the veterans they are. On “Treasure Chest,” they master many styles, showcase nuance both lyrically and sonically, and bring a relevance and topicality to the game that’s sorely lacking in these troubled times. And it’s all delivered in a way both serious as cancer (in their approach to complex issues and love of Hip Hop), and coolly mischievous (indicating their ability to not take themselves too seriously). I could get specific as to the reasons most tracks bang, but that might take up too much of your precious time (unless you’re at the office like me trying to waste time, in which case I should have written more!).

So here are the critiques I observed during a recent listen: the opener “Fists High” is too much like all the other unoriginal political and economic manifestoes currently infesting the underground scene, and so doesn’t properly introduce the album to come; Gen.Erik’s flow sounds, initially at least, a tad forced at times (new term: Caucasoidal syndrome?!); finally, the lyrical pair use a few too many uninspired punchlines amidst all the genuinely thought-provoking lyrics (sample “ehhhh” line: “more hair-raising than a blow dryer”). But if you’re a Hip Hop freak that can overlook those minor flaws (I sho’nuff can), then I suggest you get to your online/local store of choice and prepare to be Steamed on.