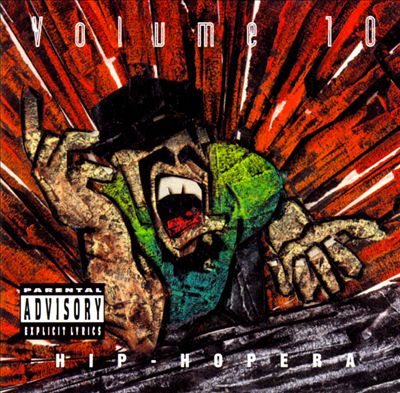 To say I totally trust the voracity of the above section would be questionable at best, and that’s after I spent at least ten minutes listening to “Pistolgrip Pump” and cleaning up a previous submission of these lyrics to OHHLA. Why would I even bother? Because I’m feeling like speaking on some obscure slept on West coast hip-hop shit, and Volume 10’s “Hip-Hopera” definitely fits the bill.

Released in 1994 to minimal fanfare and to even tinier record sales, “Hip-Hopera” was short for shelf life and quickly resigned to the bargain bin. In all respects that’s regrettable. It’s arguable that Volume 10 was simply ahead of his time. 10 was a hardcore lyricist with a mixture of on-beat off-beat rhymes, gangsterish tales of woe, lyrical freestyle ambidexterity and progressive musical backdrops. The closest analogy I can think of would be if you mixed Aceyalone with W.C. and then had the result chill all day with the Hieroglyphics crew smoking weed.

A lot of people in the decade and change since have bit on the idea of a “Hip-Hop Opera” but Volume 10 was the first to come with it and arguably set a mold to break – that is if anybody had ever heard it. Suprisingly it wasn’t for lack of trying on the part of his record label, sending out some of the coolest vinyl 12″ records that it was ever my pleasure to spin. For the “Pistolgrip Pump” single they sent doubles that were CLEAR RED, which under the right light made the needle look like it was pulsing over bloody wax. For “Sunbeams” they sent neon bright yellow wax, which really made your decks radiate with an unearthly glow. Thinking about that makes me nostalgic to get back in the game, but I always rocked borrowed equipment and if we’re being entirely honest about it I was a neophyte turntablist at best. I enjoyed it for the love of hip-hop and the soundclash, but you’d never have seen me rocking anything close to a popular nightclub (which in hindsight also means I never had to worry about my crates being stolen or ducking a drink flying at me).

Another regrettable fact about “Hip-Hopera” is that those aforementioned vinyl singles had some great remixes. In fact the funked out bass thumping revision of “Sunbeams” is so much better than the album version here it almost makes me want to rip the CD out and throw it at a wall. Then I think about the fact I’d never be able to find or replace this album again and think better of it. Besides there’s plenty to love here. The Moe Doe produced “Where’s the Sniper?” may be one of the most cinematic tales of inner city blues ever laced on record. Volume 10’s purposeful method of speeding up and slowing down his flow gives the somboer beat extra emphasis, leaving you hanging on every syllable up to the funked out guitar licks of the chorus with it’s eerie chants of “homicide… suicide…” and scratched in “BETTER WATCH YO’ BACK.” The Theodore Stanley and Cut Chemist laced “Sho Is Hype” is one of those ethereal ambient rap beats you’d hear on a prog hip-hop radio show, and V10’s flow is more beat poet than hip-hop – it works for me though. “Knockoutchaskull” sounds like it belongs in the movie “Friday,” while the Baka Boyz produced “Flow Wood” is a posse all-in track with the best of the Cali underground at the time – Ganja K, Jay Soov and RKA.

Perhaps the most emblematic of all these tracks though is the 4:02 long “Harderthanallya’ll” produced by Massive and Fat Jack. Volume 10 lopes along over the flute floops, seemingly coming in and out of a massive hallucinogenic hip-hop haze, but instead of talking about himself he’s giving shouts out to the dead: “This is for my brother, this is for my brother, THIS IS FOR MY BROTHER CAUSE HE WAS HARDER THAN ALLA Y’ALL NIGGAZ!” Volume 10’s world was not self-centered, it was observational. That more than anything else put him way too far ahead of his time in a “you gotta get yours, I gotta get mines” hip-hop era of self-centered materialism (which has only gotten more magnified since). Nevertheless if you feel like some trippy hippie Cali gangsta funk experimental rap shit and happen to stumble upon “Hip-Hopera” in stores, don’t pass up a chance to pick it up – even if it’s not cheap.