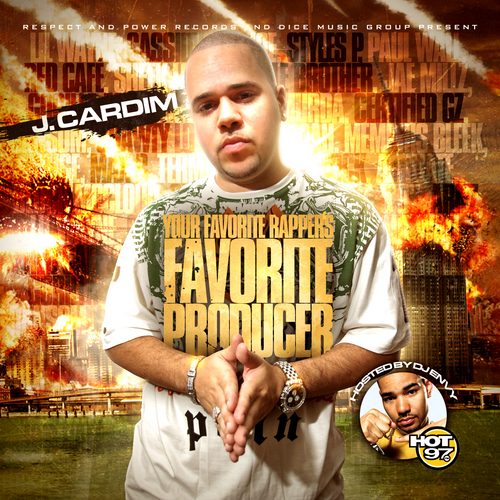 Boston’s own J. Cardim is clearly getting tired of not getting mentioned in the same breath as Kanye West, Just Blaze and The Runners when it comes to who is making the hottest beats in hip-hop. Based on his resume alone he’d certainly have reason to complain, given that he’s worked with everyone from hardcore underground favorites like Saigon and Sheek Louch to mainstream rappers like Fat Joe and Talib Kweli. “Your Favorite Rapper’s Favorite Producer” pulls no punches with its title, firing a shot across the bow of public ignorance. The phrase “your favorite rapper’s favorite rapper” has often been applied to the likes of Joe Budden and Kool G. Rap lyrically, so Cardim is pulling no punches here by saying he’s the equivalent musically. In fact by extension Cardim might actually be BETTER, because if your favorite rapper would rather get a beat from J. Cardim, it’s likely he not only offers quality comparable to or exceeding bigger names, he does so at a more affordable rate. Based on the success of this album though, prices may go up considerably.

While a disclaimer on iTunes notes that this album is “presented by DJ Envy” there’s no appreciable difference between him doing so or otherwise. He has a 32 second intro at the start of the album and that’s pretty much it – he doesn’t really interfere in the album the way Clue or Whoo Kid would. Instead your focus will quickly turn to rap artists that J. Cardim has aligned to rap on his showcase CD, and the roster itself seems capable of proving his title true. Block McCloud, Cassidy, Fat Joe, Gorilla Zoe, Lil Wayne, Little Brother, Paul Wall, Royce Da 5’9″, Saigon, Sheek Louch, Styles P and Termanology are a few of the MANY rappers to drop rap verses in cameo appearances. Even though this list is shorter than the amount of stars appearing, it accurately reflects the diversity of styles that Cardim works with on the lyrical tip – gangster New York, hardcore Dirty South, the Detroit freestylers and the North Carolina lyricsts all represented. In fact the only region I can discern that doesn’t seem to be represented in Cardim’s selection is the Westside, ranging from Los Angeles to Seattle, but it may just be the rappers out there haven’t been exposed to what Cardim has to offer before now.

“Rubber Grip” sticks out right away as being more impactful than anything on Fat Joe’s “The Elephant in the Room,” and even though he shares billing with Sheek Louch and Styles P he’s clearly got the starring role on the track.

“Yes niggaz I love my rubber grip
Fingers itchin and I’m lookin for someoneone to hit
Aww man, this is hip-hop
Niggaz been gettin shot before Scott LaRock
Every block party ended in a shootout
Midst of it all I was first to bring them tools out
Had the shotty in the Benetton bag
Deuce deuce in my sneaker make you do the running man”

Picking out individual favorites on a 22 track album is a little tough, especially given Cardim is a fairly consistant producer across the board, but a few songs do stand out as exceptional all the same. “Ryders” featuring Memphis Bleek and Saigon is good enough to suggest the two ought to be a full-time duo instead of a one-time collaboration, as their vocal tones compliment each other ideally over Cardim’s howling backdrop and guitar rock. Block McCloud is an obscure name to the mainstream, but long-time underground heads and RapReviews readers will recognize him as a member of Brooklyn Academy and will appreciate his heartfelt “My Life” duet with Sha Stimuli. Cardim’s drums do the talking for him while the duo discuss politics, yes politics of all things, clearly having recorded the track before the 2008 elections pondering if “Obama sounds like Osama” to mainstream America. My lack of appreciation for Shawty Lo as a lyricist is well known, but he’s well hidden by Paul Wall and Ghost Wridah on “Born and Raised,” a soulfully swangin’ Southern banger that sounds like Kanye producing for Scarface. For straight up lyrical pugilism you can’t sleep on Royce Da 5’9″ and Termanology firing clip after clip of hits to your face on “What You Call That,” while the still underrated Saigon spits some heartfelt shit you’ll remember long after listening to it on “Breathe Thru the Years.” Cardim’s soft-spoken ivories may be a bit cliche and the song may remind listeners of similar Joe Budden tracks, but if it’s true that when something works you shouldn’t fix it I wouldn’t change a damn thing here. Near the album’s end AZ and Little Brother collaborate on “Rise and Fall” and this is a union that needs to happen again and SOON.

Unfortunately the one thing that may be working against J. Cardim’s presentation here is the sheer volume of material being presented within. If Cardim was trying to make a case for being “Your Favorite Rapper’s Favorite Producer” he might have done well to stick to the songs already mentioned above plus just a couple of tracks featuring lesser knowns over his greater beats. With 22 songs though things tend to bog down with mediocre filler like “Star Struck” featuring Tuge, a rapper who can’t seem to decide whether he’s Lil Wayne, Twista or Puffy. I’m given to understand G-Eyez may have a following in Boston, but he doesn’t strike me as being greater than Akrobatik or Edo.G after listening to “Follow the Leader.” In short J. Cardim’s greatest asset may also be his greatest weakness – by being “Your Favorite Rapper’s Favorite Producer” he’s become highly demanded by both the known names and run-of-the-mill rappers alike. At the start of this review I suggested Cardim might raise prices based on the success of this album. Having heard his beats I would anyway just to ensure only top calibre rappers can afford to have him on the boards.