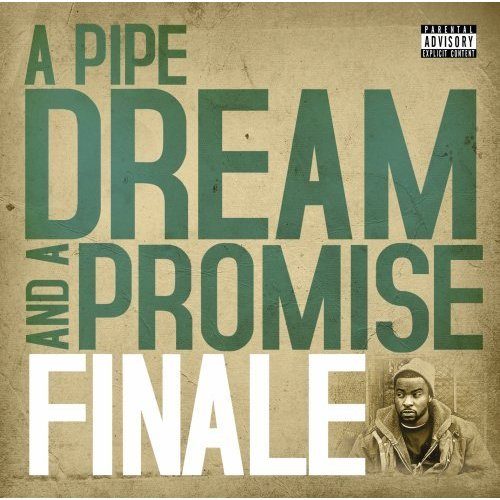 Finale :: A Pipe Dream and a Promise

It’s common sense, really. If you’re ‘experimental,’ ‘progressive,’ or whatever, it better imply more than Art’s negation. Often, ‘pushing the boundaries’ simply means producing a silly, undeveloped mess. Atrocities exist on both sides, and being able to juggle the two is rare. But, Finale – one of the better rappers to come out this decade – does this, to an extent. He doesn’t really fit, though, since he’s not ‘truly’ experimental, merely able to create something good and unorthodox, while maintaining the basics, not overturning them for the hell of it. It’s a thoughtful position.

Consider, for example, the opening track, “Arrival & Departure,” produced by V-Tech and Apollo Brown. It is something of a two-part concept track, opening with some classical, live drums, electronic rings, and, in general, an ‘elemental,’ minimalist feel that punctuates Finale’s great flow and internal rhymes. Vocally, he sounds like 50 Cent, except with talent and style. Imagine that. By the second verse, it changes up to a piano and a sample-driven arrangement, although, production-wise, it’s less impressive than the first part. Moreover, although it’s good, the two-part track sounds like two tracks – that is, not really an organic whole, which is the intent, just disparate parts. It detracts from the totality.

“Style” is more ‘standard’ hip-hop, reminiscent, lyric, flow, and production-wise, of Common’s “The Corner.” “Pay Attention” is kicked off by a blues guitar, a chorus of voices, and, as always, some excellent flows by Finale. Rap-wise, he is not ‘lyrical,’ in the conventional sense… his lines are not memorable, but in terms of sound and song-construction (e.g., Souls of Mischief, Latyrx, and others), these are all well-made. “The Waiting Game,” by Khrysis, sounds like something MF Doom might touch, although the flows are less interesting than the previous tracks. It’s less complex than it seems, but the illusion is well done: using only a few unconventional elements – electronic sounds, rings, fuzzy drums, and organ keyboards – layered to overlap as competing and complementary sounds, with lots of negative space for each. It’s quite good, and never falls to dullness, which is always a danger in the more minimalist production.

Because of its production, “A Reason” is the first sub par track. I have only rarely come across tracks with a dull piano loop that worked, especially if the background is similarly repetitive – here, a mushy bassline. If it can wreck Nas in “Represent,” you are similarly vulnerable. As always, though, Finale sounds good, but, as before, without nuance or quotables. “Motor Music,” the first single, has similar problems, but they’re not as bad – the dull tension of a scratchy bass is broken by an atmospheric vocal sample, and Finale’s energetic delivery against the musical lethargy. It works, perhaps not as well as some of the previous tracks, but there’s something to it. “Issues,” produced by Dimlite, does nostalgia quite well, with an ethereal vocal throughout, punctuated by subtle warps and ‘space’ for Finale’s better moments:

“Back in his formative years
when he was forming a beard
clear face, chasing lottery, picked chicks
to get his first formative fix
got rid of inexperience in a hit
thinking it’s more than that, they skipped class
and stripped fast…”

It’s lyrical (in the purely ‘musical’ sense), and rhyme-rich, but Finale slows down, speeds up, and stresses things appropriately, a sign of a good performer. And, throughout, this is his greatest asset – he manipulates his voice, generates moods, and rides each beat quite well, with good versatility. But, it’s the production – especially in the first half – that really makes it worthwhile, as it takes a pretty unorthodox turn from typical hip-hop production, without sacrificing quality or purpose.