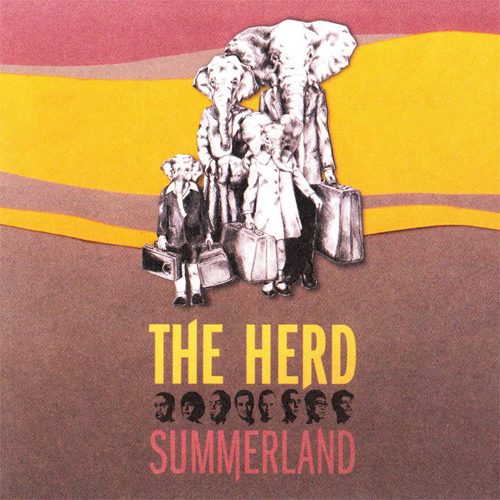 The Herd, if you didn’t know, are an impressive and successful hip hop group from Australia. Their previous effort – “The Sun Never Sets” – was reviewed on this very site, and it received some well-deserved praise. Well, they’ve got even better. Plus they LOVE controversy! Me too. After a few listens of this excellent hour-long record, you realise that you may well have witnessed one of the greatest hip hop albums in the history of Australia.

Technically “Summerland” was released in May 2008 – however, that, technically, is midway between Autumn and Winter in Sydney. The music most definitely reflects those seasons, as there are more autumnal shades to the album than bright summery moments. In fact, if there could be any random music journo comparison I could make, “Summerland” is musically most akin to “Funeral” by Arcade Fire – a hip hop version, of course. The lush and tragic strings section permeates through so much of the lyrical melancholy, the fury. The obsession with death, politics, racism.

Yet all this is counterbalanced by some wondrous singing by Jane Tyrell – a songstress with a truly unique, sumptuous vocal tone. If you could only take one thing away from the LP, it would surely be her voice – not to mention the strong choruses. Fortunately, there are many formidable aspects to The Herd’s fourth album – Ozi Batia and Urthboy prove to be lyricists of a consistently high quality level. It would be fair to say that much of their conceptual stance reflects Public Enemy in their heyday – these are some angry Aussies. They hate corporations; they been gutted and left for dead by a racist faceless government; they celebrate the dethroning of former Prime Minister John Howard. In fact, they probably wrote half of the screenplay to the recent Baz Luhrman epic â€œAustralia,â€ such is the vitriol they display.

This is close to being a true-blue classic. It misses out by a fraction, however, and that is primarily down to “Summerland” being just a touch TOO consistent. It makes for an excellent listen, but not necessarily a thrilling one throughout. Even though it is technically a well-balanced album, it doesn’t quite feel that way – perhaps due to the overcast skies. Yet, make no mistake, this is still a fantastic hip hop album – irrespective of country, colour, creed. The Herd have crafted an album that is musically brilliant, lyrically impressive, conceptually furious and an essential purchase.