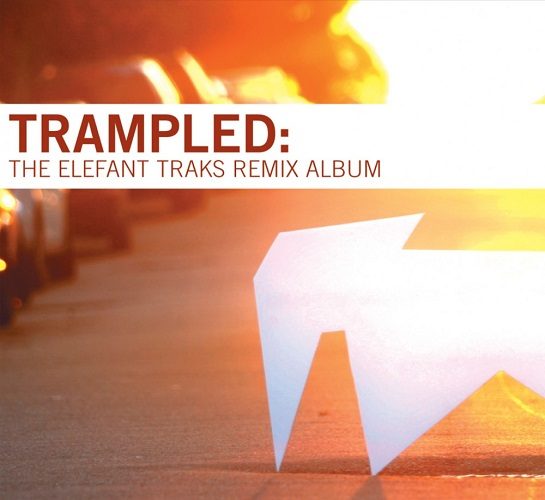 Songs are like children. Moms and dads work their asses off for them. Swear at them when they don’t play nice as they are supposed to. Shelter them until they are fit to fly out. The parents over at Elefant Traks decided their offspring deserved a second upbringing. Virtually every track on “Trampled: The Elefant Traks Remix Album” got appointed to a new guardian. One of them landed on the doorstep of a gypsy colony. Another found himself in a rundown shack of a Jamaican hermit. Anything went, as long as they were distant relatives.

Reinventing yourself is a daunting task for any musician. Once you established yourself on the scene in one way or the other, be careful to retread your steps. Complete tribes of infuriated headbangers burned their bedroom Metallica posters after Kirk Hammett died his fingernails purple. The line-up of the Australian label Elefant Tracks is so versatile, they just need to look one another deep in the eyes if they want to try something new. MC Urthboy is the label’s sombre leftwing rhyming conscience. Unkle Ho is an instrumental duckfaced platypus, as his debut “Circus Maximus” certainly proves. The threesome Combat Wombat went for a ragga/hip-hop/dub cocktail approach, and drive around in a truck powered by veggie oil. The ties that bind this vagabond label together is super collective The Herd. Virtually every group signed on the Aussie Jumbo label has at least one member doing their part in this live instrumentation hip-hop outfit. Back in 1998, it were these members who threw together a compilation album to bid a mate farewell. Combined chemistry spawned continued collaboration, and after one more compilation album Elefant Traks appeared.

Soon after their first releases, the Sydney-based label established itself as counterweight to the mostly right wing Australian political establishment. With a protest song against the brutal imprisonment of a boatload of illegal immigrants by the Australian army (“77%”), The Herd got national airplay and the talking heads talking. With two more studio albums, and an anti-war anthem (“I Was Only 19”) the eight-headed group of musicians became local heroes on earth’s least populated continent. The song became so popular, it resulted in the group re-recording it together with John Schumann, the revered seventies protest singer whom they sampled to make the original song. Can you picture Bob Dylan kicking it with Public Enemy?

“I Was Only 19” also is my only means of comparing a remixed version with a studio track. The Herd’s most cherished child, an emotional revival of an Aussie patrol on a bloody Vietnam Tour of Duty, is poured into a high-powered British blender that goes by the name of Tunng. The group, normally involved in folk electronics, only spares Schumann’s chorus as muddled little chunks in a dribbling milkshake of sound effects. Tunng’s fickle interpretation of a nation’s disgrace makes me wonder how the remainder of the seventeen featured tracks looked like when they still lived with their parents. Trakswewt’s assiduous bass beats on “Recoil” left a disconcerting headache in my right temple. Could the original beats belonging to Tzu’s venomous condemnation of Australia’s involvement in the war of terror be even more abrasive:

“First verse is a volley of words
And I’m sorry if it hurts, but my anger burns
A conservative curse covers the land
I’ll be a spanner in the works of your fucked up plans
Mister prime minister: explain once again
Why our country is at war, but we all feel ashamed
Tell me what you say to all the parents of the dead
Of the soldiers who are fallen or the civilians bathed in red
This ain’t a just war; it’s just war and business
Aggression pursued on financial interest”

Groups like Tzu and The Herd are the dominant part of this family, but Elefant Traks is more than politically fuelled rap music. Waiting For Guinness sounds like a boozed up bunch of Coco Bongo gypsies. If it wasn’t for Unkle Ho’s disciplined high hat drums, they would have probably left the stage for a bathroom break, some cigarettes, and a visit to the local brothel. The instrumentalist dreamers of Hermitude carefully defuse The Herd’s glum views with accordions and soft-spoken bass. Other external producers, like Plutonic Lab and Sulo, succeed in disposing of some of the weight toppling the scales. Sulo’s sampling of contemplative piano keys makes Urthboy almost sound lighthearted on The Herd’s “Ray of Sun”:

“A motorcycle on the kickstand, waiting for zen maintenance
Broke down on the highway and stationary ever since
Al l seems futile, I count the hours till sleep
With every breath a little closer to death I creep
Don’t be so deep, don?t be so fucking heavy, man
Just keep on writing raps with a steady hand
Because that’s all that matters; in fact: that’s all there is
I’ve got spite and envy mixed up from married life with kids
I fear the path of least resistance so: time for a rain dance
To make sure I don’t dry up like: never took a chance”

“Trampled: The Elefant Traks Remix Album” obliterated my prejudiced images of an easygoing Down Under. Without having any prior knowledge of the originals, it feels like Elefant Traks’ kids are out on summer camp on this remix album. Let’s hope the loving parents still recognize their offspring when they return from camp.