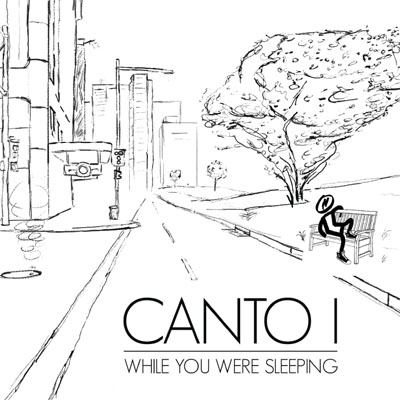 Canto I :: While You Were Sleeping

I love albums that come out of nowhere and literally blow you off your feet with freshness. At times I may seem to approach every album with a negative disposition, but the reality is quite the opposite. When I criticize something, much of the negativity has to do with the fact that I’ve been disappointed. Every time I get an album from someone I’ve never heard about I really do hope they are the next hidden gem. I hope their album is dope and that our site is the first step in a path to success and exposure. It’s not a self-fulfilling wish as I truly believe that good music deserves to be heard. This belief drives me to traverse the murky backwoods of obscure southern and Midwestern rap in the hopes that quality rap doesn’t get overlooked and forgotten. Canto I is the newest addition to the ever growing list of quality rap music I’ve found through my work on this site. Hailing out of Nevada, Canto I is an emcee duo consisting of two brothers that should have stopped being “local” a long time ago. With production from Marco Polo and distribution in over 300 stores worldwide, Canto I should at least be buzzing on the underground.

What sets Canto I apart is their ability to use what they have extremely well. By that I mean they take their dope beats, concepts, and lyrics and blend them to make memorable music. “6:00 AM” is a perfect example of how they make the most out of everything. Chadlee gives them a drowsy, dream like beat and the crew runs with the atmosphere created. “6:00 AM” is an allusion to the morning hours and the hook declares “I see the sun in the skyâ€¦It’s time to open your eyes.” While playing off of the beat, the crew flips things in a way by making the song a sort of motivational wake up call. Marco Polo makes his first appearance on “Think They Know” and brings his “A” game. The brothers take advantage of the dope beat and let fans know what they are all about:

“They think they got the whole story bout the brotherhood
Cause everyone’s got a different view on how to cover it
I’m independent from the crooked business, hustling
But mostly independent by the books and the government

The song is nothing more than a lyrical display, but it is done well. The crew just has knack for letting the beat lead them and adapting to what they are given. “One, Two” is another head nodding hip-hop anthem, but they take advantage of the eerie Rza-esque atmosphere created on “Pardon the Dust” to take things a little deeper. I have to admit that my favorite tracks on this album come when Canto I venture off the beaten path. The beat switch in “Death Connection” works well with the darker subject matter and hectic feeling of the track. The soulful vocals on “Current Status” are used well to highlight the important message conveyed in that song. “While You Were Sleeping” is a fitting companion to “6:00 AM” as they use the pounding beat to craft another eerie and atmospheric track. “P.S. (Note To Self)” clocks in at six minutes, but the somber hook, great beat, and concept make you wish it kept going. The well crafted concept tracks help balance out the more “usual” hip-hop tracks that populate the rest of the album. Nothing is wack or average, but some of the tracks can sound a little familiar given their content. Even those tracks are still given a twist at times, like “To The Sky” where they use a clever superhero metaphor.

Despite their talent, it seems even the underground has been sleeping on Canto I. One check of their MySpace and you see they don’t even have 1,000 friends on the site. Sure, a shallower measure of popularity doesn’t exist, but Canto I could at least create the illusion of a larger fan base through frivolous friends. That’s not to say the duo isn’t trying to get out there and their fans may be few but seem very faithful, but in an age where the internet rules and the Nevada hip-hop scene isn’t exactly popping the duo should take advantage of everything at its disposal. Hopefully this review is a start of some internet word of mouth snowball effect. “While You Were Sleeping” is easily one of the better produced albums dropped in 2008. The emcees spit with passion and dedication and make interesting and catchy songs. While I’ll easily admit the brothers aren’t the most lyrical rappers out there, they take advantage of what they have and put together well-constructed songs. That is a skill that even some of the most “lyrical” emcees I’ve heard fail to grasp and is the reason this CD is worth your time and money.

Canto I :: While You Were Sleeping
8Overall Score
Music8.5
Lyrics7.5