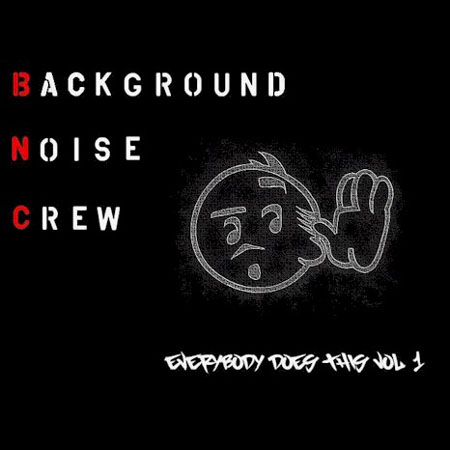 Background Noise Crew :: Everybody Does This Vol. 1

There is no denying the Midwest’s ability to create rap stars. Despite there never being a time when Midwest rap ruled the game, there has never been a shortage of Midwest rappers in the limelight. Perhaps more surprising is the fact that the Midwest does it in more than one style. MC Breed, Bone, Dayton Family, Eminem, Esham, Common, Kanye West, Twista, Atmosphere, Hi-Tek. Granted, the Midwest boasts a much larger geographic area than other regions, but despite lacking universal love, emcees from the Midwest do have a decent chance at the glory of a rap star. The Background Noise Crew (BNC for brevity’s sake) makes no attempt to hide the fact that they’ve been influenced by Minnesota’s biggest rap stars, Atmosphere. They even compare their latest release to the “Sad Clown Bad Dub” series, meaning it is a collection of odds and ends the crew has recorded over the last 8 months. The questions that remains is whether “Everybody Does This Vol. 1” will indeed follow suit and lead to another Midwest success story.

With a six man crew, consisting of 4 emcees, 1 producer, and 1 emcee/producer, it is difficult to keep track of who is who, thankfully the crew had the forethought to break that down in the liner notes. They get automatic points from me for that. “Funk Yo Monk (We Red Hot)” is a big posse cut produced by Phingaz. Phingaz puts together some deep, thumping bass and country/rock guitar licks for an unusual, but dope combination. The emcees themselves shine on other tracks. “DNA” features Analyrical where he drops some lines about his love for rap:

“I feel a slight tingle, a slight itch
Only way to see the day with the flick of a light switch
Work a nightshift, my mind takes a slight drift
Caught up in a cipher, wish
Everyday was like this”

“Wizard of Law” features Status Reign getting his concept song on:

“And that’s it, I can’t get any closer to home
If I did, I’d riddle fists in the door
No explaining cause it’s easy to find guilt in a metaphor, ain’t it
So explain why it’s my fault that your running out of patience
Deep breaths seem less important in the long haul
And how important is that net when you headed for than long fall?”

Tonekrusher Smith uses his solo to explain what it means to be a “Part Time Rapper:”

“All across the room with the confidence of a tyrant
Hijack the stage and snatch your shit up like a pirate
Peaceful man, but don’t make me get violent
When you spit those flows, those flows they refine me
All by my lonesome, it’s like I’m in confinement
Be original, the best you do is consignment
I should be rich for the service that I’m providing”

TQD gets his shine on in the form of “Carry Along” where he drops his flavor of somewhat abstract rhymes:

“It’s like standstill standoff
Stand pat, mounted in place
Til I declare I’m back
It’s concealed and peeled
Too physically real
And outright lies
By an outward appearance
Paraded out, just like interference”

Even Phingaz gets a solo track where he returns with his thick guitar licks and love for bass on “Here For You.”

“The scenery we pass we’ll never see again
So we store it up as memories and don’t let go of them
A wonderful spell, thinking that the river should go straight
Set goals and desires to control out own fate
But all the pain we experience is a result of our expectations
Because it’s the river’s nature”

Despite being listed as part of the group, Egypto Knuckles gets one production credit on the 15 track affair, but he sure takes advantage of it. “Splay” is a funky uptempo mix of deep bass lines, reggae and jazz inspired synths, and lively handclaps. To be honest it may be the best produced track on the album.

After consuming “Everybody Does This Vol. 1” the listener gets a vague feel for who the Background Noise Crew is. Each member has his strengths and weaknesses. Personally, Egypto Knuckle’s one production credit made me a fan. As far as rappers are concerned, Tonekrusher Smith’s ability to be so nonchalant while talking trash was appealing as was the emotion in Status Reign’s voice. To others, TQD’s abstract rhymes may be their preference or they might prefer Analyrical’s straight forward punch lines. Some might even choose Phingaz as the most talented due to his ability to play double roles and produce the bulk of this compilation. Things get even trickier when you realize this crew also has subgroups, three to be exact, consisting of different combinations within the group. When people encounter large crews they usually rush to the Wu-Tang comparisons, but in this case I think the Background Noise Crew is more like another crew, Living Legends. The left coast collection of emcees and producers started out just as unheralded and overlooked back in the 1990s. Much like BNC, Living Legends has concentrated more on individual efforts rather than crew records over their lifetime. Whether BNC will one day evolve and grow as the Living Legends did is anybody’s guess, but the foundation is there.