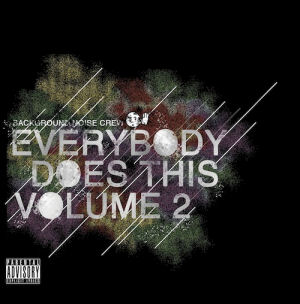 Background Noise Crew :: Everybody Does This Volume Two

The premise of DJ Complejo’s previous Background Noise review was that the Midwest is full of an underrated assortment of hip-hop talent. He even postulates that B.N.C. could be the Twin Cities equivalent of the Living Legends collective out in California – individually talented but highly praised for the group albums they release showing the depth of their musical and lyrical skills. One other comparison Pedro makes which the Background Noise Crew makes themselves – if you’re a fan of Atmosphere you’ll like their shit too.

Listening to “Everybody Does This Volume Two,” I can’t dispute any of the theories put forth so far. For those who are meeting them for the first time though, the group’s core six is Egypto Knuckles, Phingaz, T.Q.D., Analyrical, Status Reign and ToneKrusher Smith. They also have some groups WITHIN the group though,such as Green Sketch (T.Q.D. & Phingaz), ZOMBIExZOMBIE ( JL Magee & Legend Has It), Truebadours (Phingaz & Analyrical) and so on. This leads to a whole new theory Complejo didn’t have a chance to postulate – Background Noise is the Midwestern version of Odd Future. They can endlessly spin out side projects with a rotating line-up of the group’s core members as OF does, but the analogy ends there as B.N.C. doesn’t have a TV show (yet) or an obsession with Jerry Sandusky (thanfkully).

The hard copy version of “Everybody Does This Volume Two” lists which derivative of the collective performs each song on the back, which results in this being both a group album and a compilation. For better or worse this also makes it easier to single out the better contributors. Status Reign’s flow on “I’m An Alien” is among the most fluid of the crew, and Egypto Knuckles really lays on the slap bass funk thick, making it completely irresistable. Not surprisingly he’s also good when teaming with JL Magee on “Alone Too Long,” which Egypto also produces. Egypto really brings out the best in his musicians throughout – giving Analyrical the Slug sound that befits an Atmosphere comparison on a laid back track called “The Attitude” which shows he’s a top notch narrator:

“Move twenty times and I’m not even 30
Ooh what a line, now I caught me a birdie
No par 5, parkour, or a parfait
Get a job, get a check, my what a hard day
Better kick the shoes off, better get a shower
Better get a grip on the definition of power
Dreamin of the fast food, dreamin of the lazy
Thinkin of the moments when that life seemed gravy
with biscuits, and a firm mash
Roll a spliff quick, turn it into burnt ash
What levels, of expectation can we surpass
before we choke on a single shot of nerve gas?”

The folksy sound of the Phingaz production on his duet with Analyrical for “Lights On, Mic On” is also a winner. Other standout tracks are ZombieXZombie’s “Funky Dialect,” Billy Oshin’s “Goin Raw” and Analyrical’s “Mix Up Manhattan.” As previously noted, the album’s tracklisting singling out who does what makes it more obvious which members of B.N.C. shine the most, which means by the end you’ll be a really big fan of Status Reign and Analyrical, and really appreciate the production of Egypto and Phingaz. The good news is the latter two do all of the beats – the bad news is the former two don’t rap all of the songs. There’s nothing ear-crunchingly awful on this album slash compilation, but the songs that stand out unintentionally make the other members seem like they cling on as opposed to being dope on their own two. That’s just my perception, yours may differ, but either way “Everybody Does This Volume Two” is worth a listen.