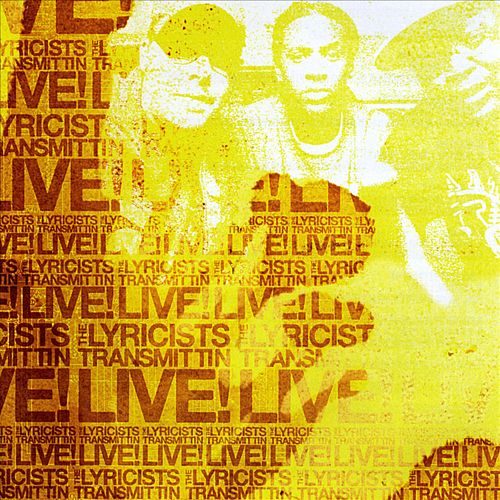 You don’t hear much about Port Huron, Michigan, but hip hop group The Lyricists manage to put the city on the map with their newest EP, “Tranmsittin’ Live! The Radio EP.” Coming together in 1995, emcees Ill Tone and Ryme-Benda collaborated along with DJ Haus Diesel, thus forming the group. They boast their “rhymes to beats, beats to rhymes” chemistry as their production from Canadian producers Pro-Logic and Know-it-All completes The Lyricists. Since their debut album, “Outta Nowhere” and followed by a 2003 release of “Anti-Industry,” The Lyricists are back with their latest EP, “Transmittin’ Live!” with new production from DJ Excel of Bmore Original Records.

Within the first few minutes of listening to “Transmittin’ Live!,” it was apparent that The Lyricists are seasoned emcees who know how to keep their music real while keeping it entertaining. As their abilities to clearly express their views on what they seemed to know best, life and family values, permeates throughout the album, the jazzy, classic beat in “Juggling” is a perfect example of this. The Lyricists take it to a more personal level as they discuss the difficulties of juggling work and family, especially in the music industry as they say,

“Mixed with the work of nine to fives
My girl, my kid, the way we live just to get by
And to keep a steady balance is the biggest challenge
A man with the illest talents couldn’t even imagine…
Didn’t mean to put you in between a rock and a hard place
Can’t explain I’m drawn to the knock and the hard bass
I know I’m trippin’ like my shoes aren’t laced
But what I’m asking is for patience because I’m average and multitasking”

“Reaction” takes Newton’s Third Law of “for every action, there is an equal or opposite reaction” to an entirely different level. After a long intro sampled from a movie, The Lyricists lay down the track to show the reasons why people react the way they do as they say, “Actions and reactions/don’t be quick to judge/You may not know the hardships/people don’t speak up.” In yet another track about life’s lessons, The Lyricists instill their knowledge about maturing in “Growing Up” featuring Braille and J. Pope as their message through their lyrics is nothing short of profound as they say,

“Growing up, living ignorant
With limited understanding
Imitating false images? Picture perfect
But when you look a little closer, man
You see the flaws all over
Follow the footsteps of fallen soldiers
It’s like trying to leave a dehydrated horse in springs of water
You can’t make ’em drink
But I’m gonna make you think
About the process of growth and the desire to obtain things”

Although The Lyricists maintain their seriousness about the issues affecting them directly, they still manage to keep us amused with their lightheartedness and humor as they let loose with their individual characters. “Bubbleguts” is a humorous track that discusses the glory and defeat of using the restroom, particularly going number two. The Lyricists tell their stories about their encounters with suddenly having to use the bathroom with the occasions of needing the restroom when it is occupied and using it at a public place such as a bar. Yes, it was foul, but still funny nonetheless. Also, “Rules of Attraction” is another witty track that breaks down the correct way to approach a female and eventually win her over. Their rules ranging from one to three are as follows:

â€¢ Never freeze when you see ’em from a distance.
â€¢ Move swift or confidence this instant.
â€¢ Don’t let the dame get away, regret is worse than rejection any day, all day.

“Transmittin’ Live!” consists of all the core elements of hip hop that are desired by most enthusiasts. The Lyricists’ talents are clearly reflected in each individual track as their sense of style, stellar verses, and character are seen throughout. Their flexibility in being able to change up their techniques and persona is something that few emcees can do and with this in mind, The Lyricists definitely have something special going on. The Lyricists are still in line to do production with their original producers, Pro-Logic and Know-it-All, for an upcoming EP for fans on the lookout. “Transmittin’ Live!” maintains the perfect formula for a impressive hip hop album and reinforces the fact that classic, real hip hop is still in existence.