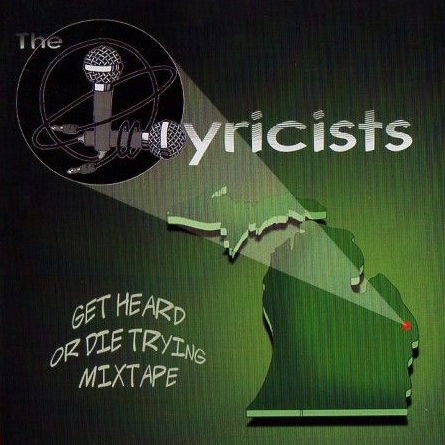 The Lyricists :: Get Heard or Die Trying Mixtape

Lyrics are dying. It is a true, undisputed fact in hip hop â€“ they are becoming less important by the hour, overtaken by: the Beat, Chorus and Flow (as well as other lesser Iscariots such as Image). So calling yourself ‘The Lyricists’ is either ringing the death knell yourself before someone else does it for you, or actually believing that lyrics still have importance â€“ and you can rock some ill rhymes that can separate you from the rest of the herd.

Much as I recognise that the music industry is at least partially correct in its analysis (after all, how many international hip hop fans really get the lyrics on any deep level?), another part of me proclaims, “God bless The Lyricists and others of their ilk!” What have they set out to achieve? Put simply, delivering a mixtape with solid beats that don’t take away their vocal shine; consistency from start to finish; interesting subject matter; and dope lyrics. They achieve practically all of their aforementioned targets â€“ perhaps the subject matter isn’t overly interesting, but hey, it’s a mixtape! One shouldn’t burn all their best concepts before they drop the album â€“ it should serve as a taster and help to build up anticipation.

Props also deserve to be dished out in the direction of whoever made the executive decision to MIX most of the mixtape â€“ as in blend the songs into one another. The very fact that one has to explain that is truly depressing, but mixtapes were traditionally MIXED! This isn’t mixed to any stellar standard â€“ there isn’t THAT much skilful scratching or beat-juggling â€“ but at least it flows nicely enough. And the two MC’s deliver well â€“ although they would never be stars in their own right, Illtone and Rym-Benda are (obviously) highly lyrical MC’s who actually drop some darn fine punchlines here and there. Perhaps their flows occasionally stumble â€“ but that may well be me expecting too much. Their vocal tones are pleasing, and work well with the style of underground hip hop they bring to the table.

You could easily imagine this deadly duo eating battle MC’s for breakfast, rocking live shows and generally pleasing lovers of underground sounds â€“ in fact, this is exactly the type of mixtape I would have loved at the beginning of my love affair with hip hop, all those years ago… And this brings me to one of my problems with the mixtape â€“ sometimes, ‘scientific’ MC’s get a bit monotonous. Dare I say, pompous? Now, while The Lyricists don’t quite veer to that side of the road, I wouldn’t mind a bit more humour (not including the now-tired Bush baiting), or emotional subject matter â€“ just a touch, mind, as they (quite rightly) should save most of it for the album. In other words, I’ve evolved â€“ and would like to listen to more evolved, well-rounded hip hop.

Which brings us back to our original point â€“ if lyrics have been relegated to third or fourth place on the list of importance, what can be done to remedy the matter? Banging out hot wordplay can only get you so far â€“ you need to connect with the listener, any which way. So I respect The Lyricists, but feel little affinity with them. In fact, on “This One Time”, I actually GET the guest rapper Ay Bee more than the mixtapes own protagonists! On the other hand, though, I cannot fail to give props to them for delivering what they believe in â€“ and they are clearly talented lyricists. Judging the mixtape on its own merit â€“ it is solid, consistent and displays various talents. I also suspect that their forthcoming album would be more of what I’m looking for â€“ and they are highly intelligent and driven individuals, without doubt. If you like Little Brother, you may well recognise “Dope beats, dope rhymes, what more do y’all want??” Those two, plus feeling the MC’s joy or pain. That’s all.