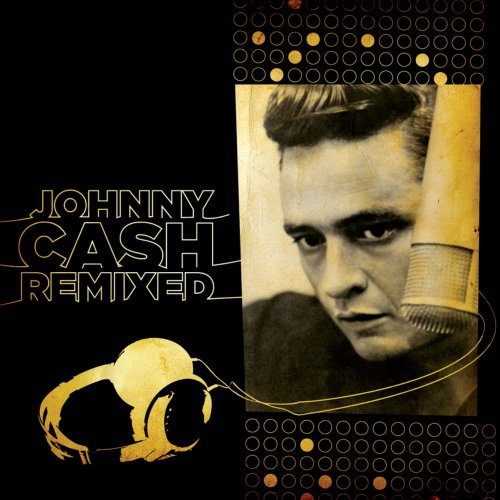 Oh, what wondrous timing! Most of us hip-hop fans have searched Joaquin Phoenix’s poor excuse for rapping on YouTube at some point by now, and laughed hysterically. Apparently he is very serious about this endeavor but he looked like I do when I karaoke Vanilla Ice after I’ve had far too many to drink. The actor famously played Johnny Cash in the biopic “Walk the Line” in 2005. Here we have an album that remixes the Man in Black’s classic tracks with new, amped up, beats–but at what expense to the integrity of the source material?

First and foremost, those looking for a purely hip-hop influenced record will be sorely disappointed with “Johnny Cash Remixed” as the disc plays around with all sorts of genres.

The primary tracks that a budding rap DJ might check out for would be “Walk the Line (QDT Remix)” featuring Snoop Dogg and “Folsom Prison Blues,” which is produced by soul brother Pete Rock. These are two of Cash’s most recognized hits from his Sun recordings, so while rap representation might be thin, it is important that the music holds up. The vinyl version of this release apparently offers up five additional cuts, including another with Snoop (“Katy Too”).

“Walk the Line,” is injected with a West Coast sounding backdrop that, of course, compliment Snoop but doesn’t do too much to strengthen Johnny Cash. In fact, Cash’s vocals are very subdued compared to the quality-level of Snoop’s. This is a major problem, as the main artist gets overshadowed by the guest–and not on the basis of talent. Therefore, this is one of weakest efforts on the album; most Cash fans will call it an atrocity, especially when you consider that only the very eclectic music fans enjoy both artists.

Then we have “Folsom Prison Blues” which is a well-produced track by Pete Rock. However, the funky beat fails to capture the magic of the original song, as it is too bouncy and uptempo for a track that features the lyric, “I shot a man in Reno, just to watch him die.” It is still solid and worth a listen.

Truth be told, the most successful tracks on here are those that do not stray too much from Cash’s vision, although one could certainly argue that a minimal remixing defeats the purpose of the entire project. Still, the most enjoyable cuts are; “Big River” Count De Money remix and the slow ambiance of “Port of Lonely Hearts.”

Hip-hop did not ruin this album. There are several updates that just do not work. The Troublemaker remix of “Straight A’s in Love” is annoying, particularly when it bridges into the hook and the industrial “Leave that Junk Alone” which has an artist that sounds like Everlast “singing” over the beat is another disaster. All of the tracks that have other artists on them can pretty much be completely discredited.

It is a difficult thing to remix songs that are so cherished by so many people. The musicians involved in such a project always run the risk of jeopardizing the charm of the original music which, unfortunately, is too often the problem here. It is not a reflection of the artists; rather, a encompassing viewpoint of the end result.