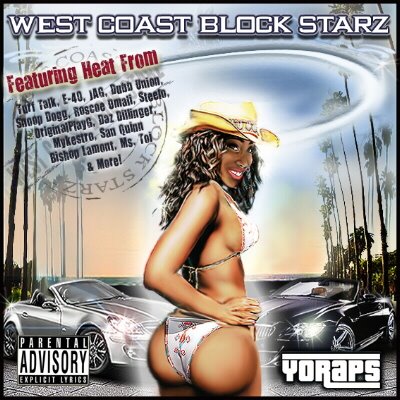 What is Block Starz Music? With one of the better websites I’ve encountered, Block Starz Music concisely answers that question. Block Starz Music is a company whose purpose is to promote new unsigned and independent artists. Their choice of promotional medium is a mixtape which you can purchase on their website. Pricing is competitive as $5.99 will get you a CD copy and a very appealing $3.50 will get you a download link. In exchange for your money you receive 18 tracks from various artists. This is the West Coast edition and as such you get a good mix of left coast emcees representing here. Big names like E-40 and Snoop Dogg show up to help promote their independent projects. Big names like Keak Da Sneak, San Quinn, Evidence, and Daz Dillinger show up to prove that you can be independent and major at the same time. New names like Jag, Roscoe Umali, and Steelo try to prove they can hang with the big boys while Bishop Lamont and Ms. Toi hope you haven’t forgotten about them.

So does this concept work? Well it has its ups and downs. On the plus side you get 18 tracks with no annoying DJ so if you like a track you can bump it in your car with no fear of permanent ear damage when the levels spike. There is a nice variety here, even with the west coast focus and I can honestly say that were it not for this mixtape I would not have peeped half of the people on here. The down side is that, well, this is a mixtape. As such, it really is nothing original or new. You don’t have a recognizable DJ or exclusive freestyles, remixes, etc. that usually draw you to a certain DJ. The lack of any exclusivity also makes you think twice about dropping your money on this. After all, if the point is to promote the artists in the CD shouldn’t they give it away for free? And then you could spend your money on buying a CD from the artists you like? For digitally minded folks $3.50 is equivalent to 3 songs so it might be worth the risk, but CD people might pass on this.

The music itself is pretty solid through and through. I can’t front on the quality of some of the cuts. The only one I had heard before was “Hot N’ Cool” off the “Welcome to Scokland” album. The other ones range from your typical west coast fare to some truly dope tracks. The immediate stand out is the E-40 assisted “Popos” by Turf Talk. There are no production credits, but the soulful beat sounds like something Jake One would produce and E-40 and Turf Talk take advantage of the dope music. Snoop Dogg and his Dubb Union give use some gangsta boogie on “I Don’t Think So” and show some definite potential. Omar Cruz and Frankie J represent for the Chicanos with their radio friendly “To The Top.” Fashawn & Evidence hook up for the hard-hitting “Our Way.” There are a few less than stellar tracks on the compilation. Ms. Toi drops some uninspired bars on the generic “West Coast Gangsta Shit” and Steelo gets a little too syrupy sweet on “Let It Roll.” Bishop Lamont shows up towards the end to beg the question â€“ Why hasn’t this man dropped an album yet? “Grow Up” is easily the best track on here and one of the few that immediately screams out “single” material.

Overall, I can recommend purchasing the digital download for $3.50 but not the CD for $5.99. It’s a simple game of economics and practicality. Chances are you will find at least 3 songs you want to own out of this collection and spending $3.50 on three songs is just paying iTunes prices. You might find more enjoyable tracks, but the CD version will almost double your expenditures and the truth is you will likely just rip the songs you like from the CD and add them to your own mixtape. I commend Block Starz for the project as the no-DJ versions of songs are good to have and they do mix a lot of talent. One can’t help suspect a little self promotion as newcomer JAG is on this CD three times, but in the end $3.50 for 18 CD-Quality songs isn’t the worst deal you will come across. Hopefully they will continue with a Southern and East Coast Block Starz in the future.